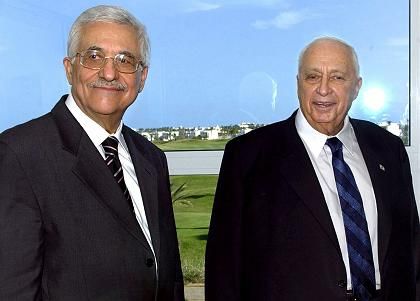 Mr. President, United States Secretary of State Condoleezza Rice said that there have rarely been such good chances for peace in the Middle East. Do you share her optimism?

Abbas: The summit in Sharm al-Sheik has created a great opportunity. The key was that we agreed on a ceasefire, even if the Israeli side has yet to confirm it and their army still has not stopped shooting. There are a few other details that need to be ironed out completely, like the Israeli withdrawal from Jericho, for example, or the removal of road blocks. However, we are in a dialogue with Israel, and that is the major difference from years past -- from four years of war.

SPIEGEL: Very early on, you started speaking out against an armed intifada. Was the intifada a tragic mistake?

Abbas: The intifada is legitimate if it's used as a peaceful protest against occupation and war. The problems began when weapons entered the picture -- on both sides.

SPIEGEL: Does this mean that some 3,500 Palestinians and more than 1,000 Israelis died in vain?

Abbas: No, they did not die in vain. Rather, they died as part of our progression toward freedom, security, and peace. Now we want to ensure that the Palestinian people can live a dignified life in security and in independence. We stood up and spoke out with our revolts. I, too, was among the founding members of the Palestinian liberation movement and one of our great successes is that the world now recognizes the Palestinian people. But now it's high time that we take advantage of this ceasefire to send a signal for peace.

SPIEGEL: What resources do you have at your disposal that will allow you to implement your course against the resistance within your own ranks?

Abbas: I don't have a magic wand. But I was elected on the basis of my positions and my views. That's the weapon that I hold in my hand and that's where the authority that I have derives from. That's why I am determined as I go down this road.

SPIEGEL: But why are you so sure that Hamas and the other militant groups will stick to the ceasefire? Are you willing to use force if it should become necessary?

Abbas: The only power is that of the state and the state has a monopoly on power. I was elected on that basis. No state on earth can afford to allow several authorities to co-exist next to one another. And that's why we will enforce this principle, if necessary.

We are not looking for a conflict with the armed organizations. We are seeking a consensus with them, and so far we have been successful. When problems arise, we meet again and discuss them. That's my way of solving problems of violence. 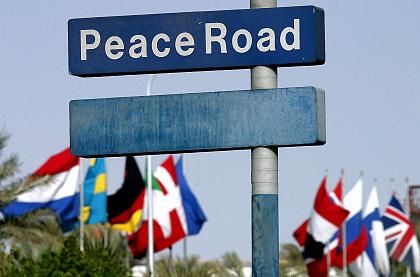 There are high hopes for a rejuvenation of the Israeli-Palestinian peace process now that a ceasefire has been implemented.

SPIEGEL: What can you offer Hamas and the other groups in return for demilitarization?

Abbas: We were successful in negotiating a stop to Israeli military operations against the militants of Fatah, Hamas and Islamic Jihad. We now want to integrate these fighters into our own security forces, which will change the entire atmosphere. Hamas also wants to participate in the parliamentary elections in July, and already achieved some successes in the municipal elections in the Gaza Strip a few weeks ago. We are aiming for political pluralism with a broad spectrum of parties -- ranging from the left to the religious parties, as is the case in Israel.

SPIEGEL: That sounds good. The reality, however, is that immediately following the summit in Sharm al-Sheik, Hamas fired mortars and missiles at Israeli settlements.

Abbas: That's behind us now. We took harsh measures against the officers within our security apparatus who failed to prevent the attacks. In addition, there have been serious talks with the armed factions of Hamas, Islamic Jihad, and the al Aqsa Brigades. During those talks, all parties renewed their pledge to adhere to the ceasefire.

The rockets, in any case, were in response to incidents during which the Israeli army shot two Palestinians. I would say that our side now has things under better control.

SPIEGEL: But the international "Road Map" to peace that you have obligated yourself to demands that you break up terrorist groups and disarm their fighters. Are you ready for that?

Abbas: If Hamas turns into a political party we won't have a problem with them anymore. And look, my course seems to be the right one. So far I have received no death threats, unlike Ariel Sharon, who receives hundreds such threats from extremist Jews.

The Road Map is quite clear on this: no illegal weapons. But when we integrate the fighters into our security force, then there won't be any more illegal weapons because the militia will have to surrender their arms first. Another factor: once Israel has withdrawn its army from the Gaza strip, will we still need weapons?

SPIEGEL: Can you guarantee that the Israeli army will be able to withdraw from the Gaza Strip without any violence?

Abbas: The people will throw flowers at the Israelis, not stones or bullets. When the Israeli army pulled out of our cities in 1994 following the Oslo treaty, our children handed the soldiers olive branches.

SPIEGEL: You seem to believe that your generation, after many decades, can at last achieve what has long been promised -- the formation of a state where Palestinians can live peacefully. You would then become a sort of Palestinian David Ben Gurion.

Abbas: I don't want to compare myself to Ben Gurion. We are trying to lead our people to a just peace and to security, and we want to pave the way for the next generations. On August 4 -- Arafat's birthday -- we will, therefore, summon a Fatah party congress for the first time in 15 years. The congress will elect a new leadership, and the young cadres will get their chance. They will then realize our dream if the older generation fails.

SPIEGEL: You talk about a "just peace." In your view, what elements must a just peace have?

Abbas: We are sticking to the Road Map with its three basic clauses. The first covers the creation of an independent, viable Palestinian state, co-existing with Israel. The second clause deals with the end of the 1967 occupation. And the third clause describes the conditions for a fair solution to the refugee problem.

SPIEGEL: Do you insist that Palestinian refugees be allowed to return to Israel?

Abbas: The negotiations will address where the refugees will return to. We are willing to discuss that. We have more than 5 million refugees, and we know that not all can return. Some may not even want to return because they may be leading a nice life in the United States or happily living in Jordan. They should, however, be compensated. We cannot give up on the rights of the refugees. They were guaranteed through a United Nations resolution.

SPIEGEL: You are a refugee yourself. Do you want to return to your place of birth and your parents' house? 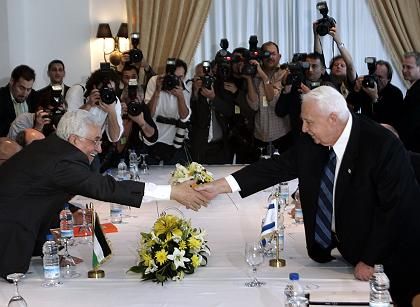 Abbas: My place of birth, the city of Safad, is now part of Israel. I will not demand that my city returns to me. In 1994, when I returned to Palestine from Tunis, I at least wanted to see the place I grew up. The Israeli mayor turned down my request and even threatened to have me killed. That's why I drove there secretly one month later and visited Safad for 15 minutes. The Israeli government in power at the time ensured my safety, though.

SPIEGEL: What would be the indispensable elements of a free and viable state of Palestine?

Abbas: East Jerusalem is occupied. But al-Quds al-Sharif, as we call it, should be our capital, while West Jerusalem should be that of the Israelis. We don't want to divide Jerusalem. We could even imagine there being a joint city administration.

SPIEGEL: There you may run into some problems with Ariel Sharon.

Abbas: As early as 2000, during the peace talks in Camp David, we began discussing that issue with Israel. At the time, we even discussed who should get which city quarter. Why should we fall back from that?

SPIEGEL: And what about the West Bank? Only four settlements are to be cleared there in connection with Israel's withdrawal from the Gaza Strip. Prime Minister Sharon recently stressed again that the large blocks of settlements in the West Bank were "facts of life" that are not up for negotiation.

Abbas: What right does Israel have to build settlements on our land? Even the wall that leads across Palestinian land is illegal and will bring neither security nor peace. We cannot build a viable state with a country that is disintegrating into small pieces.

SPIEGEL: Are you saying that all settlements need to be cleared?

Abbas: Either they will be removed or they will come under our jurisdiction.

SPIEGEL: That doesn't seem realistic. Even if Sharon wanted to, he would surely face difficulties in building a broad support for clearing all settlements.

Abbas: In the past, one probably would have also said "it's impossible to clear 23 settlements in the Gaza strip." But sure enough, Sharon made the decision and received approval in the Knesset. That means it can be done after all.

SPIEGEL: But not even Ehud Barak, the Israeli Prime Minister with whom you negotiated at Camp David as a guest of US President Bill Clinton, wanted to dissolve all settlements.

Abbas: Israel finally has to recognize that we are surrendering a large part of historic Palestine and instead are accepting just 22 percent in order to make a historic peace.

SPIEGEL: Sharon points to guarantees issued by US President George W. Bush, stating that the large settlement blocks will remain in place.

Abbas: What right do the Americans have, together with Israel and without consulting us, to decide on our fate? We do not accept the American assurances to Sharon, as they anticipate final phase solutions that we have not yet negotiated.

SPIEGEL: How long will it take before the Palestinian state that you are dreaming of will become a reality?

Abbas: We are realistic. The bitter experience of the failed Camp David summit showed that we cannot solve a centuries-long problem in just 16 days. Now we have 7 or 8 months, maybe even a year, to reach a solution.

I can certainly put myself in Israel's shoes. They are humans just like we are. They want peace and security inside their borders. And they know that the settlements cannot survive in the long-term.

SPIEGEL: What do you still have in common with Yasser Arafat? During the election campaign, you said "I am following in Arafat's footsteps." But now it seems you are taking a different route.

Abbas: If the Israelis locked me up like they locked him up, I couldn't act any differently than Arafat did. But I have the opportunity to move about. My proposals are being accepted around the world. Yasser Arafat is our teacher when it comes to pragmatism. He showed us how to take the middle course. He had so much charisma that everyone followed him.

SPIEGEL: But only Arafat's death created the opportunity that you are now trying to take advantage of.

Abbas: Perhaps the conditions weren't as ripe in the past. I will readily admit that. Or maybe our view wasn't as clear. But now there's a determination to achieve co-existence. We've had good experiences in the past, after all. In 1994 after Oslo, when we returned to our homeland, we could move about Israel freely and the Israelis came to our land to go shopping and they ate and drank in our restaurants.

I think the majority of both peoples want to achieve co-existence.