Mr. President, the recent sharp tone in Warsaw since your election has rubbed many in Germany the wrong way, amid claims that Poland plans to focus more heavily on upholding its own national interests in the future. Doesn't Poland feel like an equal partner in Europe? 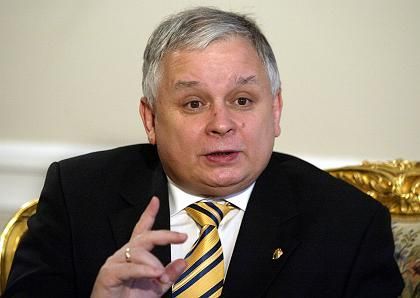 Kaczynski: I follow the German press with great interest. But not all of what I read there is helpful toward achieving German-Polish reconciliation. Some in the West apparently believe that Poland no longer has its own interests, and that it is all too willing to agree with the opinions of others. This is absolutely not the case. Indeed, other countries in Europe uphold their own interests with great determination.

SPIEGEL: Which countries do you mean, for example?

Kaczynski: The current catchphrase in France is economic patriotism. And Germany is signing an agreement with Russia over the Baltic Sea pipeline, a project that starkly contrasts with Polish interests. There are no economic reasons for this natural gas pipeline. We are allies of Germany, in both NATO and the European Union -- so why this pipeline around Poland's borders? My discussions with Chancellor Merkel -- a very agreeable woman -- were not satisfactory or constructive for Poland in this regard.

SPIEGEL: In response, Warsaw is now proposing a so-called energy NATO. What's that supposed to be?

Kaczynski: It's one of the proposals to the EU. The controversy over Russian gas deliveries shines a glaring spotlight on the risks involved in this industry. In an energy NATO, EU and NATO member states would guarantee one another assistance in obtaining energy, in any form, but without violence. Of course, we need an additional pipeline system for this purpose.

SPIEGEL: All of that would be clearly directed against Russia.

Kaczynski: We want the best possible relations with Russia, of course. But at the same time, we are very vigilant when it comes to the German-Russian relationship. The reasons for this bilateral pipeline through the Baltic Sea were purely political.

SPIEGEL: You are opposed to deeper involvement in the EU. What has prompted this aversion? Poland has benefited immensely from its EU membership in recent years.

Kaczynski: Unlike other countries, we're not skeptical at all when it comes to EU expansion. In fact, we are in favor of admitting Ukraine and Turkey. In this sense, one can hardly say that we are focusing unilaterally on our own national interests. Austria, for example, has held up the negotiations for Turkey's admission to the EU. Why am I against deeper involvement in the EU? There are several reasons for that.

SPIEGEL: Would you tell us what they are, please?

Kaczynski: Nations are an historic reality in Europe. They all have different histories, and they joined the EU at very different times and under widely differing circumstances. I was mayor of Warsaw for three years and always in favor of Poland joining the EU. But I also experienced how we had to implement EU regulations that were completely inappropriate to our situation.

SPIEGEL: But the European Union must represent more to your country than a bureaucratic behemoth.

Kaczynski: You have to consider that countries have now joined the EU that had no sovereignty for decades, countries like Poland, or others that weren't even countries, like the Baltic states. Independence is especially important for these states.

I'd also like to point out the following: Our biggest Europe enthusiasts -- not everyone, of course -- are those who were especially deeply involved in the communist regime and who didn't want to have anything to do with the West. But I am one of those people who view Poland's regaining its sovereignty in 1989 as the most important event in our lives, even more important, in my case, than my being elected president of Poland. I would be interested to hear what Ms. Merkel, who is originally from East Germany, has to say about this.

SPIEGEL: You once said that about the only thing you know about Germany is the Frankfurt airport. You never visited Poland's neighbor to the west, even as mayor of Warsaw?

Kaczynski: Yes, that's true. I hardly know Germany at all.

SPIEGEL: Did you also say that next to Russia, Germany poses the greatest danger for Poland?

Kaczynski: That's certainly a true statement if you look at the history books. But I don't see this as a current risk.

SPIEGEL: You plan to meet with Chancellor Merkel in Berlin this week, and one of the issues you'll be discussing is the controversial center Germany plans to build to commemorate the millions of Germans driven out of formerly German areas of Poland in 1945. The chancellor is in favor of the center, but she wants to prevent a qualification of German culpability. Can you see Germany and Poland reaching a compromise over this issue?

Kaczynski: I believe that this center is a very bad idea, although I do not wish to question Ms. Merkel's good intentions. The fact is that such a center will necessarily result in the qualification of culpability -- especially with the new and worrisome intellectual climate we've seen develop in Germany in the last five or six years. Indeed, a tendency has even emerged to qualify what happened between 1939 and 1945.

SPIEGEL: But the Germans have undoubtedly taken a highly critical look at their past.

Kaczynski: I certainly acknowledge that. It's very positive. And I don't question that the Germans also suffered. There were large-scale bombardments that killed many more women, children and civilians than soldiers. The German army suffered tremendous losses at the front, and then there was the resettlement from the western parts of what is now Poland. This resettlement was undoubtedly a very tragic incident, but the heavy bombardment of German cities was even more tragic. I haven't noticed the Germans building memorials to their bombing victims -- besides, when such plans did exist, the British quickly put a stop to them. Forced resettlement is certainly a terrible thing, but it isn't nearly as bad as the bombing of major cities.

SPIEGEL: Are you saying that the planned Center Against Expulsion merely reflects an inadmissible excerpt of the past?

Kaczynski: First of all, such a center would only portray German suffering to a very selective extent. Second, culpability would then truly be qualified. Poland was on the right side in World War II. In return, we lost almost 50 percent of our territory in the east. If we add the newly acquired regions in the west and north, Poland was 77,000 square kilometers (29,730 square miles) bigger than it is today. I'm not saying this to question the current borders.

Besides, development remained at a standstill in Poland for at least two generations. Communism, after all, was also a violent system that heavily curtailed opportunities for the people. If World War II hadn't ended with the communists coming to power, Poland may not have achieved the same per capita income as Germany, but we would certainly be on par with Spain. Those were our own acute losses, and that was the outcome for Poland. West Germany, on the other hand, was able to move forward at a tremendous pace after the first years of chaos.

SPIEGEL: Poland has assumed a pioneering role in spreading democracy to Ukraine and Belarus. This has caused considerable displeasure in Minsk and Moscow. When do you plan to meet with (Russian) President Putin?

Kaczynski: It's up to both sides to show good will. I hope that there will be an opportunity for such a meeting this fall.

SPIEGEL: Do you have enough support within the EU for your eastern European policies? Or is the West giving Moscow too much leeway?

Kaczynski: There are certainly major differences between Poland's policies and those of the old EU countries. Debates are going on in Brussels over a shared foreign policy and even a shared foreign minister. As one of the 25 EU members, we try to understand this. But we are smaller than France or Germany, for example. What would a common foreign policy look like? Would the trip I took to Kiev last week require a detour through Brussels in the future? Would it require approval from Brussels? While the West, for its part, doesn't think twice about other countries when it comes to its projects?

SPIEGEL: During the decisive days of the Orange Revolution in Ukraine, the EU and NATO did in fact almost put a stop to the opposition.

Kaczynski: My predecessor, Aleksander Kwasniewski -- and this is something I must admit, despite our many differences -- was very effective in Ukraine at that time, and he played a key role in resolving the conflict between the old regime and the opposition. He was only able to play that role because he traveled directly to Kiev. If he had arrived two days later, after making a detour through Brussels, it would have been too late.

SPIEGEL: It's been said that your country is headed toward a new rebirth under your leadership, that the Third Republic is now turning into the Fourth Republic. What is your vision of a future Poland?

Kaczynski: We are still in the Third Republic. The fourth is just a plan. It isn't meant to become an ideological state, as some in the West have claimed. It will be a state that creates order. Poland has achieved great successes since the 1990s. It has joined the EU and NATO, and it developed private enterprise. But we still have many relics and relationships left over from the old socialist economy. Back then, the best guaranty for a successful career was to participate in the old system, and of course the people from the intelligence services had the best opportunities. These insider relationships still play an important role today, and there are even links to organized crime. We must put an end to this, especially the relationships that go back to the intelligence agencies.

SPIEGEL: That sounds like a potential witch hunt. As part of its plan to embark on this course, your ruling Law and Justice Party (PiS) has chosen to align itself with Poland's right-wing nationalist party and Andrzej Lepper, an unpredictable populist with a criminal record.

Kaczynski: That's a widespread misconception. None of the parties you mention is involved in the government as a coalition partner. Western reporters here in Warsaw simply refuse to understand this. PiS won the parliamentary election, albeit by a small margin, and I won the presidential election. My twin brother Jaroslav, the party leader, and I would have bet that a coalition with the liberal Citizens' Platform would be possible. But they imposed impossible conditions, and they are to blame for the current domestic political situation. Everything else you hear in Europe are lies. PiS and I had absolutely no influence over this constellation.

SPIEGEL: In other words, your government allows itself to be tolerated by a marriage of convenience with which you yourself are not entirely satisfied?

Kaczynski: I will not comment any further on this. It's an internal matter.

The interview was conducted by editors Christian Neef and Jan Puhl.