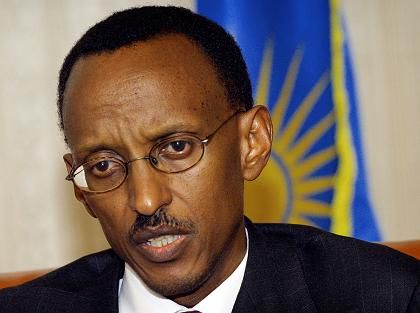 Mr. President, a terrible genocide took place in your country 12 years ago. Can your countrymen live free of fear today?

Kagame: A lot has changed here. The country is rebuilding itself once again as one nation and that is the reason why we are making progress. Now many Rwandans are making their ends meet and others are able to do better than they have before.

SPIEGEL: So, a reconciliation between Hutus and Tutsis has taken place?

Kagame: Reconciliation is a process that will take time. We have a society that has experienced a very serious rupture and you can't expect all of a sudden that things will be perfect. Even so: You cannot find any more areas where any segment of the population would be afraid to go, like we used to have before. But there is always a lot more to do.

SPIEGEL: In neighboring Tanzania, those responsible for the genocide have to face the United Nations tribunal in Arusha. Did this help with the process of reconciliation?

Kagame: Reconciliation has been more dependent on factors other than the Arusha Tribunal. That has been an external thing.

Kagame: Reconciliation has taken place here and was successful because Rwandans reconciled themselves internally. If the tribunal had taken place in Rwanda, it might have helped. People could have watched justice being done.

SPIEGEL: Some critics accuse the tribunals of one-sidedness because they judge only crimes committed by Hutus. They don't consider crimes perpetrated when your faction, the Rwandese Patriotic Front (RPF), gained the upper hand in the country and stopped the genocide.

Kagame: This point is brought up by people who always work to balance things, even in a situation where such a balance cannot be struck. That is nonsense. One has to recognize the huge difference between the former government which committed the genocide and an organization like the RPF which stopped it. And besides, fighters of the RPF, who committed crimes, were punished severely.

SPIEGEL: There are also the village courts, the so-called "Gacacas," which are supposed to deal with the past.

Kagame: This traditional way of justice has not been tried before in recent times. The Gacaca courts bring together the population, then the people tell the truth, they forgive and they punish where appropriate. And the combination of all that will result in helping us to move forward. It seems to be working -- not perfectly, but better than anything else.

SPIEGEL: On the other hand, many Rwandans have fled to neighboring countries because they were afraid of the Gacaca courts.

Kagame: I think the whole picture here is distorted. In the first five years after the genocide we had the problem of 3 million refugees. We were trying to deal with the problem. Today there are maybe 60,000 refugees and we are trying to deal with this problem, too. But this is typical of the way the Western media is looking at Africa. There is a problem, say in the year 2000, and the problem is addressed. And then four, five years later, you find the media is still talking about something that has been addressed five years ago.

SPIEGEL: No, we are talking about the difficult times your critics have right now in Rwanda. Why, for example, is the Belgian priest Guy Theunis being persecuted? Nobody seriously assumes that he was involved in the genocide.

Kagame: He was indeed involved. It's on record. Suppose even that he is later found innocent -- as long as there are grounds to suspect him of a crime, should people release him because he is a Belgian or because he is a priest? That would not be justice. 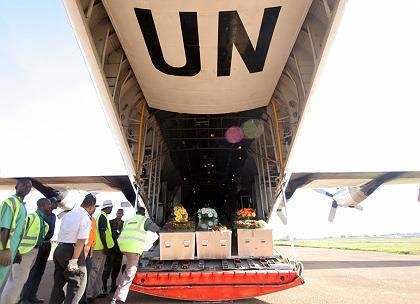 The coffins of eight United Nations Guatemalan peacekeepers who were killed 23 January in the Democratic Republic of Congo.

SPIEGEL: Your predecessor as president and a former member of your own party, Pasteur Bizimungu, has been convicted to 15 years in jail because he dared to found an opposition party.

Kagame: Indeed, there are African leaders who have the dangerous habit of leading their people into an abyss. In Rwanda we've had presidents who killed. The one million people who died here were, to a certain extent, victims of their leader, President Juvénal Habyarimana, who died in a plane crash before the genocide began. He contributed to all that. The man who took over from him was running around ordering people to kill. If this president came back and landed in my hands, I would have him arrested and tried. Unfortunately, he died a natural death.

SPIEGEL: This plane did not simply crash -- it was shot down and the circumstances were never resolved. There are people who hold you responsible for that.

SPIEGEL: And why didn't you publicly ask the UN to investigate?

Kagame: Why should I ask them? What are rumors to us? You talk nonsense, we ignore you.

SPIEGEL: Back to the original question: Why does your predecessor have to spend 15 years in jail?

Kagame: In the period after the genocide we had special laws. There was one law that prohibited political parties at that time. He knew that and he broke the law. He also mobilized Hutus against Tutsis and thus insulted the population. Finally, they found money in his house, which he pocketed illegally.

SPIEGEL: And why did the human rights group Liprodhor have to leave the country?

Kagame: There is a lot of documented evidence against this group. Unfortunately, when you read what is published about Rwanda you would think that every house here was in flames. Just like 12 years ago.

Kagame: As far as Rwanda is concerned, the problem has been resolved. In the Democratic Republic of Congo, they will even have elections in June. The situation is better than it has ever been before. The UN is there, even if they are not doing enough. The government is busy with the internal situation. The situation in Congo shows nothing for which you could hold Rwanda responsible.

SPIEGEL: Except the refugees who are still a threat for the stability in the DRC.

Kagame: That is only a very small number.

SPIEGEL: But they are Hutus, many of them the perpetrators of the genocide, who fled when your government took power.

SPIEGEL: You seem to be very skeptical of the UN mission in the Congo. Shortly there might be troops from the EU, including some from Germany, to secure the elections.

Kagame: Up to a certain extent the UN soldiers are useful. But they are consuming a lot of resources in relation to the little work they are doing. This is what we tell our political partners. Why should you be comfortable with spending millions of dollars without securing results?

SPIEGEL: We think your mistrust of the UN goes very deep.

Kagame: My own experience from a decade ago taught me I cannot trust them. But it is a world body and we have to live with it and tolerate it. But I can't hide my feelings about its inefficiency and its not being productive.

SPIEGEL: Didn't your army invade the DRC at least partly to get hold of mineral resources like diamonds and coltan?

Kagame: Nonsense. We have never traded much in diamonds except for people who all of a sudden came here and traded them. People who come from the Middle East, from Europe, from America. And I don't see why people should accuse us and not accuse these people who transact this very business.

SPIEGEL: How about coltan (columbite-tantalite), which is being used in mobile telephones?

Kagame: When people accuse us of taking coltan from Congo, I don't understand what they mean. The quality of our own coltan here from Rwanda is much better. But still people from the UN come here, we show them our coltan mines, we show them the documents, then they go and say: Rwanda smuggles coltan.

SPIEGEL: Your country depends on development aid for up to 65 percent of its annual budget. This form of international help has often proved to be ineffective. Do you understand the sentiments of people in Western Europe who think enough is enough?

Kagame: I tell them they are partly to blame themselves. This applies to Germany as well as to any other country. They spend so much but they spend it for unnecessary things. They don't follow things up. Of course there are Africans who are to blame, too. Some people have even stolen the money. But Europeans and Americans have a huge share of the blame.

SPIEGEL: In the war-torn Sudanese province of Darfur, people are still dying. Neither the African Union (AU) nor the international community seem to be able to solve these problems. Why is that?

Kagame: These situations bring out the weakness of the international system. The AU, which spearheads the operations in Darfur, tells you they don't have money to run the operation. The suggestion is we give it to the UN. Then the government of Sudan says, 'no', we won't have the UN. Then there are UN members who want oil in Sudan and that completely changes the dynamics of the process. In the end it is the people on the ground who suffer.

SPIEGEL: But that can't go on forever.

Kagame: We have people on the ground there. The UN asked us and we sent forces there -- a very huge contingent, with nearly 2,000 troops. But we didn't get any support. We stayed for two months and not a single coin came from anywhere. No food, no pay for the soldiers. Nothing.

SPIEGEL: Mr. President, we thank you for this interview.