SPIEGEL: The United Nations special investigator, Serge Brammertz, will issue his report on the murder of your father on Wednesday. Do you expect a clear assignment of responsibility -- and, if so, what could the consequences be? 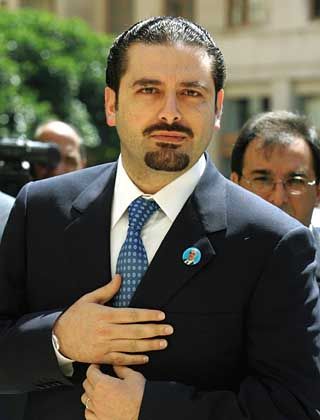 Saad al-Hariri: "I lost someone I love, my father. I want his murderers to pay."

Hariri: First of all, I have complete confidence in Serge Brammertz, who took over this position from Detlev Mehlis, the German prosecutor who had already been working so successfully and thoroughly. I don't know which names of those responsible are cited in the report. I do know, however, that Lebanon will not come to rest until this crime has been solved -- or until the perpetrators have been brought to justice. We must have an international criminal proceeding against the assassins.

SPIEGEL: Everything suggests that associates of Lebanon's pro-Syrian president, Emile Lahoud, your father's political adversary, planned the murder. The Beirut public prosecutor's office has already had four men arrested, men with close ties to Lahoud. Is it true that one of them dialed Lahoud's mobile number shortly before the attack?

SPIEGEL: Brammertz was also able to question Syrian President Bashar Assad and his deputy, Farouk al-Sharaa. Do you really believe that the Syrian president could have ordered a murder? Could it be that Assad's intelligence service acted on its own?

Hariri: I'm telling you: Assad is responsible. Or let me put it this way: Based on everything I know, he bears at least some of the responsibility.

SPIEGEL: Assad disputes this. And, meanwhile, Syria has withdrawn its troops from Lebanon. What else do you expect from your big neighbor?

Hariri: That it doesn't interfere in our affairs, that certain Lebanese politicians are not stirred up by Damascus during their busy travels and that no Palestinian radicals are encouraged on our soil to commit acts of terror. We seek good neighborly relations with Syria, relations based on mutual respect. We want to clearly define the border and agree to resume normal relations, as called for in a recent UN resolution.

SPIEGEL: That is a rocky path. Assad seems secure in his office. And pro-Damascus President Lahoud, along with part of his entourage, remains firmly in charge in Beirut.

Hariri: I don't see it that way. Lahoud no longer has an entourage. He is a man of yesterday, a symbol of an outmoded system. He should resign as soon as possible. If he sees himself as a Lebanese, that's what he'll do. But if he now thinks and acts more like a Syrian, he'll resist once again.

SPIEGEL: Your private plane seems to have become home for you. In recent months you've been a guest at the White House and the Kremlin, in Paris, London and in many Arab capitals. And now you've returned from Berlin

Hariri:  where I thanked the Chancellor for especially intensive support for Lebanon in difficult times. Germany backed us politically in an exemplary manner. You're right, I do travel a lot. But I did attend a major rally in Beirut marking the anniversary of the murder. Following that event in February, I decided to live in Lebanon again, despite all the risks of terror. Believe me, it was a very emotional return.

SPIEGEL: In your speech to several hundred thousand people in Beirut, you called for unity among the Shiites, the Sunnis, the Maronite Christians and the Druses in Lebanon. But aren't the differences flaring up once again -- as evidenced by the destruction of the Danish embassy in Beirut by a mob incited by fanatics?

Hariri: That was a despicable act, one that is condemned by the overwhelming majority of Lebanese. But otherwise I'm very optimistic. Whatever our religion, there is far more that ties us together than divides us. We are all proud to be carrying a Lebanese passport.

SPIEGEL: You mentioned the international community's support for Beirut and for you personally. But the UN also wants something from you -- the disarmament of Hezbollah. The radical Shiites, however, are part of a cabinet you control.

Hariri: I have no problems whatsoever with that.

SPIEGEL: Hezbollah behaves as if it were a completely normal political party. But Hezbollah also has a militant arm, which maintains an aggressive militia that's constantly attacking northern Israel. The Americans have Hezbollah on their list of terrorist organizations. Do you want to disarm the militia? Given you dependence on the radical Shiites, are you even able to do so?

Hariri: First of all, Hezbollah is dependent on us. I am the leader of the largest political bloc in parliament. We are in talks. You should wait to see how things develop. It'll happen.

SPIEGEL: And Hezbollah will truly allow itself to be disarmed? Do you have a time frame?

Hariri: No. Things here are made far more difficult by the aggressive policies of Israel, by the fact that they continue to occupy parts of our country and that they repeatedly bomb our territory. We have the right to resist.

SPIEGEL: Does your friend in the White House feel the same way?

Hariri: I described it to him that way and found him to be receptive. I hope that Washington can have a moderating effect on Israel, at least behind the scenes. There are indications to suggest that this is the case.

SPIEGEL: Can you, in return, exert a positive and moderating influence on Hamas?

Hariri: I speak with the representative of Hamas, just as I do with the director of Fatah's newly opened office in Beirut. I believe that the West should enter into a dialogue with Hamas.

SPIEGEL: Palestine is only one trouble spot in the region. The other is Iran. There can be no further easing of tensions in the Middle East unless the mullah regime definitively renounces nuclear weapons. You maintain a dialogue with Tehran. Have you made the gravity of the situation clear to those in power there, and could you possibly even serve as a mediator?

SPIEGEL: The Arab world's image in the United States is bad, almost as bad as the Americans' reputation in the Middle East.

Hariri: That's true, and we're both at fault. What the Americans must understand, especially in Iraq, is that one cannot impose a democratic model, shove it down the throats of the members of another culture.

SPIEGEL: Could Lebanon become a model for the Arab world?

Hariri: Lebanon is a democracy with free elections and a free press. We'll have five percent economic growth this year and possibly a record year for tourism -- as long as we remain spared by terrorism.

Hariri: Of course, everything could move ahead a lot faster. But we have achieved a great deal. In our part of the world, patience isn't just necessary, it's a virtue that's vital to survival.

Hariri: Well, he's still walking around a free man today. Seriously, though, I haven't felt ready yet. But I'm still learning. I'm currently happy with my job as head of the largest bloc in parliament. It's a lot of work and it's interesting work.

SPIEGEL: And in the future?

Hariri: I lost someone I love, the most precious, my father. I want his murderers to pay. I don't know what'll happen after that. My life is still ahead of me.