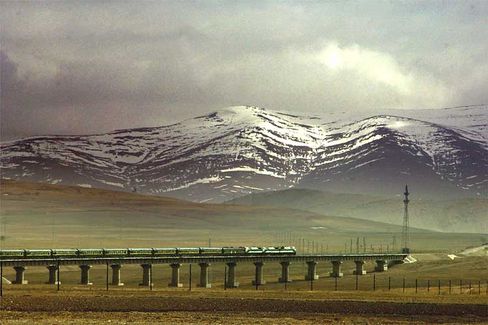 SPIEGEL: Mr. Zhang, Tibet is traditionally a deeply religious country, whereas the Chinese Communist Party is secular. Marx called religion the opium of the masses. How do you reconcile the two?

Zhang: Nature is diverse. Different life forms coexist and the world is colorful. This also holds true when it comes to ideology. We emphasize harmony, so that different ideologies and ideas can live together in peace. The Chinese government practices religious freedom.

SPIEGEL: But since when has the Communist Party tolerated religion in its current form?

Zhang: The party and the government have a clear policy on religion. First, we have religious freedom. Second, religious communities must make their own decisions, and we cannot have interference from abroad. Third, they must be conducted and managed according to the laws. And, finally, we show them how to become integrated into socialist society. You can see the way it is in Tibet, where people make pilgrimages to the temples, turn their prayer wheels and pray to Buddha.

SPIEGEL: The Dalai Lama is one of the world's most popular religious leaders, and he is deeply revered by the people of Tibet. But the government in Beijing sees him as a despicable separatist. Why?

Zhang: Our policy toward the Dalai Lama is clear and consistent. After the founding of the People's Republic and the peaceful liberation of Tibet, he was elected to a leadership position in the National People's Congress in 1954. He remained a member of that body until 1964. In 1956 he was named director of the preparation committee for the Tibet Autonomous Region. All of this was done so that religious freedom could be guaranteed, and so that Tibet could be integrated into the great family of socialist nations. He fled the country in 1959. There is no doubt that at that time he was a widely respected religious leader.

SPIEGEL: And is he no longer that today?

Zhang: He did many bad things later on that contradict the role of a religious leader. The core issue is this: Everyone must love his motherland. How can it be that he doesn't even love his motherland? We have a saying: "No dog sees the filth in his own hut, and a son would never describe his mother as ugly."

Zhang: Tibet is the home of the 14th Dalai Lama, but China is his motherland. He deceived his motherland. He rebelled in the 1950s and in the late 1980s he incited unrest in Lhasa that was directed against the people, the government and society. He destabilized Tibet.

Zhang: If I remember correctly, from 1959 to the middle of this year he has made 312 visits to places all over the world, which comes to an average of six countries a year. It was even 12 in 2005. And what did he do during these visits? The goal of these so-called official visits was to form alliances with anti-Chinese forces and to engage in propaganda for his separatist views, which conflict with religion.

SPIEGEL: But much has changed in the world in the last 20 years. China has opened up and trade has become globalized. The question of power on the roof of the world has been resolved. The Dalai Lama has abandoned his claims to independence and agrees to a far-reaching autonomy for Tibet. Why isn't China generous and self-confident enough to allow the Dalai Lama back into the country, as he would like? Does he still pose a threat to you?

Zhang: We have a clear policy. The door to negotiations will always be open to him, but only when he truly and comprehensively abandons his intentions to divide the motherland, intentions that are directed against society and the people, only when he gives up his splittist activities and only when he openly declares to the world that he has given up claims to independence for Tibet.

SPIEGEL: Didnt he do this long ago?

Zhang: The problem is that his behavior and his statements contradict one another. He says: "I want to take a middle path and I accept that there is only one China." But in reality he has not spent a single day not trying to split the motherland. 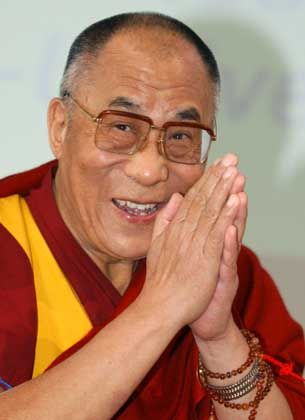 The Dalai Lama: "What has he done for peace?"

Zhang: What his so-called middle path means is this: He wants to integrate Tibetan settlement areas in the provinces of Sichuan, Yunnan, Qinghai and Gansu into Tibet. He wants to be in charge of this "Greater Tibet" and he demands that the People's Liberation Army be withdrawn from the region. Besides, he wants to see a return to an earlier, theocratic feudal realm, as dark and gruesome as it was. In those days, government officials, noblemen and monks ruled 95 percent of the population. And he wants even more autonomy for Tibet than has been given to Hong Kong and Macau. That is splittism.

SPIEGEL: But haven't there already been talks between representatives of the Dalai Lama and Beijing?

Zhang: His government-in-exile is illegal. Our central government has never recognized it. No country in the world, including Germany, recognizes it diplomatically. There are no talks between the Chinese and his so-called government-in-exile. The current contacts merely involve a few individuals from his immediate surroundings. The talks revolve around his personal future.

SPIEGEL: The Dalai Lama enjoys a great deal of sympathy in America, Europe and in Asia, also because the Chinese Communist Party is not particularly democratic.

Zhang: Frankly, the number of people who know the true Dalai Lama is very small. His supporters include enemies of China, but also the true faithful, who are being led astray by this false religious leader. And, finally, there are those who do not understand the real situation.

SPIEGEL: Nevertheless, the Dalai Lama is a winner of the Nobel Peace Prize.

Zhang: I have never understood why a person like the Dalai Lama was honored with this prize. What has he done for peace? How much guilt does he bear toward the Tibetan people! How damaging is he for Tibet and China! I cannot understand why so many countries are interested in him.

SPIEGEL: For many Europeans, Tibet is still a country full of myths. A new railroad line to Lhasa was inaugurated a few weeks ago. What does it mean for Tibet?

Zhang: We are very pleased about this railroad. Everyone is convinced that what the Communist Party has achieved on the roof of the world is a miracle. It demonstrates China's strength and its economic and technological progress. But, more important, the railroad shows that the Chinese Communist Party is doing everything it can to improve life for the various nationalities in the border regions. Tibet is now economically linked to other provinces and the rest of the world.

SPIEGEL: There are rumors that China has nuclear weapons stationed in Tibet. Can you confirm this?

Zhang: I can assure you with all responsibility that this is all a complete fantasy. There is no nuclear weapons factory in Tibet.

SPIEGEL: The Dalai Lama is 71. He has hinted that there may not be a successor or reincarnation. How will you react? Will you nevertheless encourage a search for a reincarnation?

Zhang: The current Dalai Lama is the 14th. We do not know how much longer he will live. We believe that good people live longer while bad people live shorter lives.

SPIEGEL: Then the Dalai Lama, at 71, must be a good person.

Zhang: It is difficult to say whether he is good or bad. But when we consider his actions, he does not appear to be a good person.

SPIEGEL: If the Dalai Lama doesn't want a successor, will the Communist Party then say that this is a good thing? Or will it undertake its own efforts to search for a successor in Tibet?

Zhang: There has always been a specific system to search for a successor to the Dalai Lama and the Panchen Lama. According to the historic rules and religious rituals, monks must travel throughout the country and draw lots from the Golden Urn. But the central government has the final say.

SPIEGEL: Will there be an official and an unofficial Dalai Lama, one in Tibet and another in India? After all, since 1995 there has been a dispute over the Panchen Lama, Tibet's second most important religious leader. The Dalai Lama recognized one Panchen Lama, but Beijing approved another.

Zhang: The reincarnation of the Panchen Lama has been regulated since the Qing dynasty, that is, since the 17th century. The search for and naming of the 11th Panchen Lama was done strictly in accordance with historic rules. This is why he was recognized by the central government. He is the legal Panchen Lama. The Dalai Lama broke the historic rules during the search for the Panchen Lama. He didn't even have the Golden Urn from which to draw lots. The Dalai Lama creates chaos. But the market for him here in Tibet is shrinking.

SPIEGEL: Religion appears to be gaining strength in many parts of the world, such as in predominantly Islamic regions and in the United States. Isn't religion also on the rise in Tibet?

Zhang: Religion is a historic phenomenon that will continue to exist for a long time. Our religious policy is very relaxed, and it is in keeping with realities. But religion may not operate against the law and may not interfere in justice, education, production and labor. In China, people are free to believe or not. We do not become involved in this personal decision.

SPIEGEL: But you have announced plans to strengthen the so-called patriotic education campaign in the monasteries, which is also directed against supporters of the Dalai Lama.

Zhang: Every nation on earth teaches its people to love their motherland. We are organizing patriotic education everywhere, not just in the monasteries. Those who do not love their country are not qualified to be human beings. This is a matter of common sense.

SPIEGEL: Do you actually speak Tibetan?

Zhang: Just a few words. I have only been here a few months. But I do want to learn the language.

SPIEGEL: Mr. Zhang, we thank you for this interview.