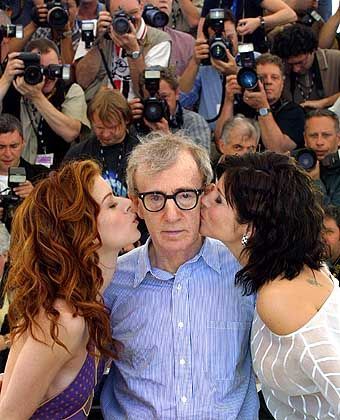 Woody Allen may found life tragic, but he's always been pretty lucky with the ladies.

Mr. Allen, your film tells the same story twice, first as a tragedy and then as a comedy. Both parts are really funny. Do you think then that humor is the only way of reflecting reality?

Allen: Actually I don't. I think that the tendency for most people is to fall back on a comic interpretation of things -- because things are so sad, so terrible. If you didn't laugh you'd kill yourself. But the truth of the matter is that existence in general is very very tragic, very very sad, very brutal and very unhappy. Every now and then, something happens that's funny. And that's refreshing. But then you move back into the real world, which is not funny. You only have to pick up the newspaper in the morning and read about the real world and you see that it's rotten, just bad.

SPIEGEL: It seems that the ancient Greeks were able to learn from the tragedies played on stage. You hinted at classical Greek theatre in "Mighty Aphrodite". But what about us? Does suffering make us better human beings?

Allen: There is nothing really redeeming about tragedy. Tragedy is tragic, and it's so painful that people try to twist it and say "it's terribly hard, but look we've achieved something, we've learned something." This is a weak attempt to find some kind of meaning in tragedy. But there is no meaning. There is no up-side. And suffering does not redeem anything; there is no positive message to learn from it. I have thought for a while that it would make a good story to look at two filmmakers, one who makes tragic films and one who makes comedies, to see who helps people more. The first argues that you come to his tragedy and he gives it to you so that you confront reality and you don't escape. And because you confront life, you learn to understand other people and you are more generous to them. The comic makes the movie and says "The world is terrible." So you walk into the cinema, sit there for two hours, hear a nice bit of music, have a laugh. It's like drinking a cold glass of water on a hot day. The argument can always be made that the comic filmmaker is doing the better service. In the end he is helping you more, you're okay for a little while longer.

SPIEGEL: So is this one of the reasons why we don't see any hint of what happened on September 11 in your recent films? Would your fans be scared?

Allen: No, it's because I don't find political subjects or topical world events profound enough to get interested in them myself as an artist. As a filmmaker, I'm not interested in 9/11. Because, if you look at the big picture, the long view of things, it's too small, history overwhelms it. The history of the world is like: he kills me, I kill him. Only with different cosmetics and different castings: so in 2001 some fanatics killed some Americans, and now some Americans are killing some Iraqis. And in my childhood, some Nazis killed Jews. And now, some Jewish people and some Palestinians are killing each other. Political questions, if you go back thousands of years, are ephemeral, not important. History is the same thing over and over again.

SPIEGEL: So maybe that's why we in Europe see you as a kind of classic filmmaker, the Shakespeare of cinema. Is "Melinda and Melinda" like a chemical experiment, in which you put people in different situations to see the reaction you get?

Allen: Yes. I'm probably more interested in eternal human feelings and conflicts. If I make a good film, it will always be good. The same feelings and problems will persist 5000 years from now. Like the Greek tragedies which still touch us today, which still work.

SPIEGEL: For this film and again for the next one, you didn't write a part for yourself. Will we see you acting in your movies again soon?

Allen: Yes, I think this summer I might do a movie and be in it, because I haven't done that for some time. If I don't have a part in a film for a while, I get the urge to act, just for the fun of it.

SPIEGEL: After doing "Melinda and Melinda", you made "Match-Point" last summer in London with the young Hollywood star Scarlett Johansson. Could you imagine living for some time in Europe and maybe working with European actors?

Allen: Nothing pleases my ego more, than to be thought of as a European filmmaker. That for me is the highest achievement. So when I made the film in England, it was such a pleasure for me. I mean, I loved it. And when I came home, my wife said "that was such a wonderful experience for you. Now you could make a movie in Germany, in Barcelona, in Venice or Paris. You love all those places." And they are so supportive of the artist in those places. That's a different attitude. In the United States, cinema is essentially all about the studio. And it's an industry. They want to spend a hundred million on a movie and make five hundred million.

SPIEGEL: Do you feel more like some kind of European independent director?

Allen: In Hollywood the average film is about 50 million dollars, this is an average film. I made my last three films for less than 15 million dollars. And in Europe, you can do this. It's independent people who give you the money and they are not interested in having any input, they don't interfere with my work. So I would be very interested in doing a non-American film. I could do this in France, because I speak a tiny bit of French. I could imagine making a series of films abroad. It was not a frightening experience in London. It was most gratifying. Then there is the thought of opening the films in Europe: To me there was nothing more satisfying than the opening "Melinda and Melinda" at the San Sebastian film festival last September.