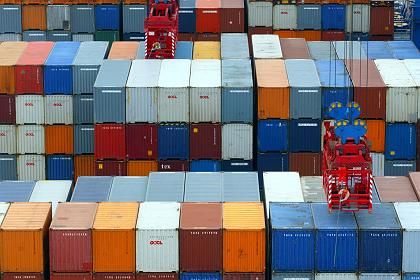 When the pressure's on, the logistics experts at Hamburg's Altenwerder container terminal do not turn to software, no matter how much brainpower it may pack. They prefer tried-and-trusted hand-eye coordination.

Wielding his joystick, a crane operator maneuvers a 61-meter-long boom over the NYK Artemis, a colossal freighter belonging to the Japanese shipping company Nippon Yusen Kaisha with a capacity to stow 6,200 standard containers. On the left-hand monitor, he reads the ID of the specific container to be fished from its hold. His gaze then shifts to the screen on his right. Perched high above in the glass cubicle of the grab crane, he eyes an orange container, plucks it from the darkness and sets it down adroitly on a brightly lit quayside platform. It's a deft piece of conjuring performed in almost absolute silence. All told, it takes about one minute to complete, allowing up to 50 such tricks per hour.

The magician is relieved halfway through his stint. It's tough going. The crews work through the night here. The Artemis cannot overstay her welcome a minute longer than necessary. The armada of ships seeking berths in Hamburg is immense, much greater than expected.

When designing its terminal in Altenwerder, the Hamburger Hafen und Logistik Aktiengesellschaft (HHLA) had projected annual growth of 6 to 7 percent - maximum. But the figure has since topped 14 percent. "We totally underestimated the impact of globalization," says HHLA CEO Klaus-Dieter Peters.

At the time, no one could have envisaged how quickly the ocean-freight business would evolve as a result of the increasing division of labor. Asia -- particularly China -- serves as the world's manufacturing hub; Europe and the U.S. are its main consumers. And between them lie the seven seas. This waterworld is globalization's home field.

More than 3,500 cargo ships are sailing the Pacific, Atlantic and Indian oceans today. They are loaded down with about 15 million containers. Like beads lined up on a necklace, these huge vessels ply their transcontinental routes. And their number rises every week. The container market is growing nearly three times as fast as the world economy. If the experts are to be believed, the sky's the limit (see chart).

A system of self-propelling factors powers the growth: Globalization drives containerized cargo, and containers fuel globalization. Steel boxes have become the building blocks of the new global economy. Without this ingeniously simple, stackable and standardized receptacle, we would still be waiting for China's economic miracle, and the American urge to spend, spend, spend would have been stifled in its infancy.

The invention is relatively young. Some 50 years ago, on April 26, 1956, the first container ship owned by a man named Malcolm McLean set sail from Port Newark, New Jersey, en route to Texas. On board were 58 trailers. The American had come up with the idea years earlier, when he was a trucker watching bales of cotton being hauled by sweating laborers. The trailer became the container. McLean later founded the Sealand shipping company, which was acquired by the market leader Maersk in 1999.

Today McLean's boxes make the world go round. Most of them are manufactured in China, where a standard container -- 20 feet long and holding up to 28 tons -- sells for $2,500. But the trend is toward a 40- foot "stretch" version. Also growing in popularity is the refrigerated model which, easily identified by its white exterior, costs as much as a mid-sized car.

Containers can hold just about anything: frozen beef going from Buenos Aires to Rotterdam, LCD monitors heading from Hong Kong to Los Angeles, and even subway cars being exported from Hamburg to Shanghai. The ships, too, are expanding in tandem. Vessels that accommodate 6,000 to 7,000 standard containers -- or TEUs ("twenty-foot equivalent unit") as they are known in the industry -- are becoming a common sight on the high seas. And designers have already dreamed up huge freighters capable of accommodating 13,000 TEUs.

According to one rule of thumb, a single medium- sized ship can move as many containers as are transported on a typical German autobahn during a whole day. When goods are shipped in such vast quantities, the transport costs become negligible. For a bottle of Australian wine that costs €7.50, transportation makes up about 12 cents of the price. For a €4 pound of Central American coffee, it accounts for just 3 cents.

The ships usually spend four to eight weeks at sea. A global network of shipping lanes now spans the globe, directing traffic. The Artemis, for instance, plies the so-called "A Loop": from Hamburg to Amsterdam and on to, say, Tokyo, Singapore and Southampton before returning to Germany. Vessels from the "Super-Post- Panamax Class" -- which measure 40 meters wide and can't squeeze through the Panama Canal - take 56 days to complete a single lap.

The ships are usually fully laden when they leave the Far East and head farther east to the West, but relatively little cargo heads in the other direction. Ships sometimes sail from U.S. ports half-empty: a graphic illustration of the imbalance of trade, and a discrepancy reflected in the price. Sending a container from Shanghai to Hamburg can cost over $2,000; the return journey may be had for less than a tenth.

Shipping companies, though, love nothing less than chaperoning empty containers around the world. They implement sophisticated IT systems to circumnavigate the problem. Precision planning is critical in any case: The customer always expects containers to arrive "just in time."

Long before the Artemis reaches the River Elbe, her cargo data has been transmitted to the Altenwerder terminal. There planners determine the sequence in which the cranes will unload the goods destined for Hamburg.

After the crane operator has lifted a container from the deck, it is taken to a warehouse -- on a driverless truck whose movements are controlled to within 3 centimeters by transponders under the asphalt. A crane then places the container in its temporary resting place, where it waits until the shipping company requests delivery. That could be in hours -- or weeks.

Despite these refined logistics, delays in international freight shipments are commonplace. Outside ports like Los Angeles or Southampton, dozens of ships frequently lie at anchor for days because the stevedores are overstretched.

The shipyards are working at full steam as well. Shipbuilders are booked out for years to come. Prices have kept pace with demand. A freighter like the Artemis now costs 33 percent more than three years ago.

Given such bottlenecks, shipping companies can grow only by swallowing their rivals. Maersk recently acquired the British-Dutch company P&O Nedlloyd. And Hapag-Lloyd's parent company, the tourism giant TUI, has decided to enter the market and purchase the British-Canadian CP Ships. "Container shipping is one of the last major growth frontiers of globalization," says TUI CEO Michael Frenzel.

But how long can the boom last? Container shipping is a cyclical market, and warnings about overcapacities such as those experienced five years ago are growing louder. For Ottmar Gast, deputy chairman of the Hamburg Süd shipping company, there are increasing indications that "the sky may not be the limit, after all."

In the coming year, analysts project, shipping capacity will outstrip demand. "There is a gap," says Tue Ostergaard of WestLB bank in Copenhagen, "and it is growing." According to his calculations, freight rates are likely to fall for the first time in years -- by 5 to 10 percent. All things considered, even this level is sky high. The container industry is still riding on the crest of a wave. In the global factory, the international division of labor continues to move forward inexorably -- and the world's shipping lanes are its conveyor belt.