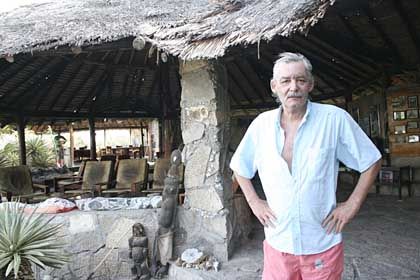 The Oasis Club in Loiyangalani has seen better days. Up until the late 1980s, seaplanes landed on nearby Lake Turkana in Kenya's arid north, bringing in eccentric American millionaires from Cairo. British rock legends Mick Jagger and David Bowie drank double gin and tonics with Somali supermodel Iman -- who would later become Bowie's wife -- on the club's terrace, while US celebrity photographer Peter Beard hung around at the swimming pool. The restaurant served fillet of rainbow perch that was accompanied by copious amounts of Dom Perignon.

But ever since the 1991 Gulf War, western tourists have shied away from the region. The countries on the Horn of Africa and in East Africa have simply become too dangerous for them. At some point, the seaplanes and their celebrity clientele stopping coming, and before long even Air Kenya cancelled its regularly scheduled flights between the capital Nairobi and the region.

A few years ago, an elderly gentleman arrived at the club, introduced himself as Mr. Cornwell, stayed two days and drank a few beers with the club's owner, a German expat named Wolfgang Deschler. A short time later, Cornwell, under his pseudonym John Le Carré, wrote a book titled "The Constant Gardener," which included a moody tribute to the hotel's owner and his oasis in the middle of the "parched lunar landscape on Lake Turkana."

Otherwise, the Oasis Club is usually abandoned, and Deschler spends much of his time listening to the radio -- his only link to civilization -- while hoping for better days. But the situation looks anything but promising. In the rocky deserts of northern Kenya, a war is raging for ever-shrinking natural resources, water and grazing lands. Only a few paleontologists searching for the origins of mankind in nearby Koobi Fora have the nerve to visit the region these days.

Hundreds are thought to have died in tribal clashes among the Gabra, Turkana, Samburu and Pokot tribes last year alone. The killing has been facilitated by countless firearms smuggled across the borders from Sudan, Ethiopia and Somalia into Kenya, where they are awaited by eager buyers.

The conflict has been aggravated this year by a merciless drought. More than 40 people have apparently starved to death in Kenya in recent weeks. To attract international attention to the crisis, Kenya's otherwise phlegmatic President Mwai Kibaki has declared a state of emergency and requested food aid. But the country's problems are home-grown, and the current woes have been foreseeable for some time coming.

When Deschler took over the Oasis Club in 1980, 500 people lived in Loiyangalani. The current population is over 15,000. Only very few here have jobs. The German, with his staff of 25 at his resort by the lake, is one of the area's biggest employers. Only as a result of regular food deliveries by the United Nations World Food Program can the people in Kenya's harsh northern region avoid starvation. Even in less dramatic years, the WFP distributes more food in Kenya than in once strife-torn southern Sudan.

According to Deschler, the aid has become a threat to the entire region. "People just hang about, waiting for food deliveries from Nairobi," he says. "They are losing traditional survival strategies. The area is pretty much made up of only dependent recipients of charity."

Swiss biologist Hans Herren, who headed the ICIPE ecology research Institute in Kenya for many years, agrees. "Northern Kenya is hopelessly overpopulated," he says, "and this overpopulation is the result of years of western aid shipments to areas that really don't have the potential to feed so many people."

The Rendille, a nomadic tribe in the country's north, numbered about 20,000 when Kenya gained its independence in 1963. Today they total 56,000. "There are more and more people and there is less and less water," complains the region's former health commissioner, Musa Okola. The problem isn't just overpopulation. "The desert is expanding," he explains. And steady deliveries of food aid to the barren region have dramatically exacerbated its problems instead of alleviating them. "In the past, people slaughtered their animals for food during difficult times," says Okola. "But ever since the World Food Program began feeding us, hardly anyone does this anymore. Everyone just waits for the next delivery."

Long lines are forming once again in front of the distribution station down in the village of Loiyangalani, where tear-proof sacks bearing the blue imprint of UNICEF have arrived. "The deliveries come in every two or three days now," says a visibly pleased Ltanywa Ltarakino, who is supervising the distribution. Samburu women skillfully balance boxes of vegetable oil, bags of corn and dried bananas on their heads. "We are now feeding 20,000 people here, free of charge," Ltarakino proudly proclaims. Word of the charitable work has clearly gotten around. Hundreds of people have now become permanent fixtures in front of the small warehouse, where they spend their days squatting apathetically in the sweltering sun.

Instead of waiting for handouts, they could be preparing to slaughter their livestock. The meat would feed the area's starving people and reduce ever-growing herd sizes that would help alleviate the serious problem of overgrazing. The environmental consequences of burgeoning cattle herds are catastrophic. In East Africa and the Sahel region, overgrazing is already estimated to have claimed an area of about 680 million hectares, or roughly 1.7 billion acres. "The irony of the situation is that the nomads would rather face starvation with their livestock than eat or sell the animals," wrote the Nairobi newspaper Sunday Nation. Herds of cattle are even beginning to encroach on the country's unique national parks and destroy its last semi-desert regions.

Dying with the cattle 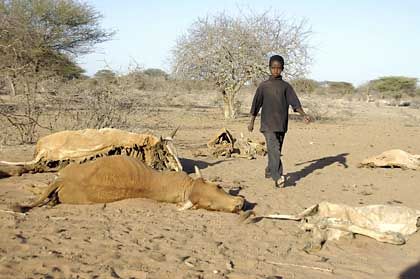 A boy walks by cattle carcasses in northern Kenya.

Similarly to the Dinka tribes in Sudan, the Samburu cattle farmers generally do not eat the meat from their cattle. Instead, they drink the milk and occasionally a small amount of cattle blood. The vast herds serve primarily as status symbols and as currency in a region where the price of a bride has risen to more than a hundred cows. "The herds are more important to the Masai than a woman," says Iris Krebber at the Nairobi office of the German aid organization Welthungerhilfe (German Agro Action). "The cattle-herding nomads actually need to change the way they live as quickly as possible." But it can't happen overnight, especially since the constant calls for help tend to exacerbate the situation rather than encouraging altering lifestyle changes. "Unfortunately, the aid often comes from people who have no idea what it looks like on the ground," says Krebber.

But German Catholic missionary Hubert Mössmer is quite familiar with the region. He has been living in North Horr, on the edge of the Chalbi Desert, for the past 10 years. Mössmer believes there's no reason for people to starve in Kenya now. "We had a lot of rain in recent years, and that's why the livestock herds have grown everywhere," he says. Herds that once consisted of 200 goats have now mushroomed to 600, says the missionary. "It's complete idiocy, they'd be better off planting vegetables."

The surplus has essentially destroyed the local market for goats these days. And traveling the 500 kilometers to Nairobi and its markets is also out of the question. Because the corruption-plagued Kenyan government hasn't invested in road construction, large stretches of the country have become practically inaccessible and much of the suffering population in the north has been cut off from the capital. At the same time, although Kenya's fertile western region has seen record harvests, corn is spoiling in the silos on Lake Victoria because it isn't worthwhile to sell it. Aid organizations are increasingly distributing free corn from the United States, essentially destroying the market for local farmers. For them, it's cheaper to allow their grain to rot than to truck it northward hundreds of kilometers along catastrophic roads and then sell it for low prices.

As the day comes to an end in Loiyangalani, the blood-red sun sinks into the lake to the sound of the generator at the Oasis Club. The only activity is that of the aid organizations' trucks stirring up dust clouds on the bumpy road. Deschler occasionally raises his glass of whisky as if to toast the trucks and their drivers. "Crazy aid," he murmurs. Unfortunately, there is little he can do about it.