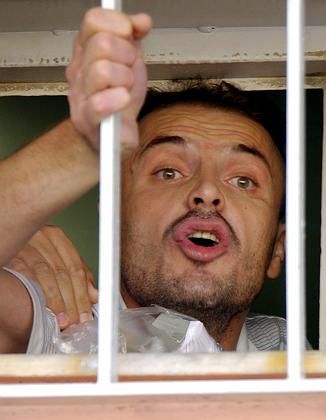 The appearance a fortnight ago before an Istanbul magistrate could hardly have been more theatrical. "I had prepared a one-ton bomb, I would have attacked Israeli ships," the Syrian Luai Sakra, 31, hollered with gleaming eyes, still in his prison chains. "Not one Turk would have been harmed! Only Israelis! Allah Akbar!"

The mega bomb would have been disastrous. The police found 750 kilograms of hydrogen peroxide -- a bomb-building material often used by al-Qaida -- in a flat in Antalya. The Islamist confessed that he wanted to load the explosives on speed boats and run them into Israeli cruise ships. The Israeli government immediately ordered five luxury liners with Jewish passengers to be rerouted to Cyprus and put out a warning against traveling to Turkish holiday destinations.

Sakra's beard was immediately shaven off in police custody. His arrest is viewed as a great success in the fight against Islamic terror, and German agents find themselves wishing they'd arrested the man in Munich or Berlin.

Why? Based on intelligence from Turkey, security agencies have identified the Syrian not only as a close friend of Abu Musab al-Zarqawi -- the Jordanian chief of al-Qaida in Iraq -- but also as former asylum seeker in Germany. Until shortly before Sept. 11, 2001, Sakra lived in a southern German town under the name of "Louia Sakka," and still has family in the Black Forest region.

Sakra was born in the Syrian city of Aleppo and entered Germany in September 2000 to seek asylum. Back then he was a no-name to German authorities. Sakra moved to Schramberg, in the state of Baden-Württemberg, a Black Forest town of about 19,000 people surrounded by lush green fields, and famous as the birthplace of Junghans watches.

An asylum dormitory called "Majolinka" -- a long, whitewashed, two-storey building -- still stands on a street called Banhofstrasse in Schramberg. The building once housed a crockery factory. Then resettlers moved in; later it was a transition home for asylum seekers.

In fall 2000, four of the 200 places were taken by a young family from Syria: Sakra and is wife, just 18 at the time, and their two sons. They lived on the ground floor in one room with four beds and a kitchenette. Luai Sakra was hardly ever home. When he was around, he avoided any attention. He was slender, lanky, non-descript; he always wore a shirt and pants. No caftan, no long beard.

Nonetheless, the government rejected his asylum application. His appeal before the administrative court in Freiburg, case number A 5 K 10444/01, also failed. But back then none of the authorities could have sensed what sort of refugee was finding shelter in the Black Forest.

Back then, in fact, the Syrian had been an ardent follower of al-Zarqawi, who now coordinates insurgents in Iraq. Sakra took dozens of trips before his stay in Germany to Syria, Turkey, Jordan, and Afghanistan. And in the Afghan town of Herat, where Zarqawi led a military camp, Sakra is suspected of being one of his first trainees.

During his travels in the Middle East, in 1997, Sakra met two German converts to Islam: the brothers Christian and Matthias K., who tended to rave about Chechnya and the mujahedeen. The families hit it off. Soon the Germans married a pair of Sakra's sisters and moved close to Schramberg. When Sakra came later -- seeking asylum -- the brothers served as translators.

German intelligence noticed the converts: For a while the German military counterintelligence agency, MAD, screened one of the brothers, who worked for the German military. (Sakra's relatives are still being watched by security agencies because they're assumed to have been in jihad training camps.) But the main actor wasn't on the radar screen.

Then, on July 24, 2001, Sakra went underground. His family flew to Damascus. On Sept. 10, 2001 -- one day before the attacks in the US -- Sakra allegedly told the Syrian secret service that al-Qaida attacks on America would occur in the near future. Though he didn't name the cities or buildings, Sakra did give certain vague details of "Operation Holy Tuesday," in which planes would be used as weapons and towers as targets. The Syrians passed on this crucial information to the CIA right after Sept. 11. The Americans were reserved at first -- they suspected a feint by the Syrians -- but they started to look for Sakra. For the Mossad and the CIA he became one of the most wanted men in the world. And German authorities would come to realize -- too late -- that they'd hosted a possible top member of al-Qaida in the Black Forest.

At first it was a race. Could the intelligence agencies catch an Islamist who presumably knew all about 9/11 beforehand? At first, no. On Nov. 15 and Nov. 23, 2003, bombs exploded in Istanbul in front of a Jewish Synagogue, the British Consulate and the HSBC bank. Members of the Turkish terror cell later told interrogators that a Syrian called "Aladdin" had financed the attacks. Investigators identified the fairy-tale man as Luai Sakra, who also went by "Dr. Alaa" and "Ala al-Din."

A court ruling in Amman suggests how close Sakra had been to Zarqawi in all these years. On Feb. 11, 2002, the judges convicted him in absentia, with Zarqawi, to 15 years in prison. Sakra allegedly supported the Jordanian terror group that had planned attacks for the turn of the millennium, on (among others) the Mariott Hotel in Amman. The official indictment from 2001 reads, regarding Sakra: "Current residence: Germany, on the run." Suppose German authorities had caught him back then?

In real life, though, he only wound up in custody last month, on July 30). Upon his arrest at the airport of Diyarbakir, this terrorist from a well-to-do family carried $120,000 in cash, and investigators assume he managed finances for Zarqawi.

The Syrian's fanaticism could be seen in court two weeks ago, when he confessed to ordering the attacks in Istanbul and to taking part in the execution of a Turkish truck driver in Iraq. "I have no regrets!" he shouted at journalists.