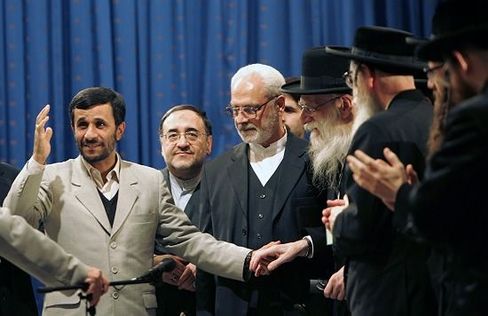 Iranian President Mahmoud Ahmadinejad and participants at a convention of Holocaust deniers in Tehran.

SPIEGEL: How does one feel as an Iranian Jew when your own government invites highly dubious 'experts' who deny the Holocaust to your country?

Yashayaie: It hurt feelings in our community very deeply. When our government questions a historical fact like the murder of 6 million Jews, we Iranian Jews feel very sad.

SPIEGEL: Why didn't your community put up any significant resistance to this event?

Yashayaie : Back in January, we wrote a letter to the president to protest against the conference. I told him that he could not achieve any benefits for the Iranian nation, the Muslim community or the situation in Palestine by denying the Holocaust. Unfortunately we didn't receive any answer.

SPIEGEL: Shouldn't you have presented your own facts at the conference?

Yashayaie : First of all, we never even bothered to take part in this shameful conference. We would not have been able to get much of a message across anyway, considering the kind of atmosphere that prevailed there.

SPIEGEL: Did the conference cause much of a stir in Iran?

Yashayaie : No. Many Iranians know absolutely nothing about the genocide. The crime of the century against the Jewish people is barely even mentioned in our school textbooks.

SPIEGEL: Are you afraid that President Ahmadinejad's anti-Israeli agitation will trigger a wave of anti-Semitism in Iran?

Yashayaie : I don't want to rule out that possibility, but so far we haven't noticed anything. The president keeps stressing that his rhetorical attacks are aimed at Israel and not against Jews in Iran. So far, life has been totally normal for the 25,000 members of our community. In Tehran alone we have 26 synagogues, as well as Jewish primary and secondary schools.

SPIEGEL: But you also try to avoid being recognizable as Jews in public. For example, you don't wear the yarmulke, the traditional skullcap.

Yashayaie : Iranian Jews do not traditionally wear the yarmulke. And officially there is no discrimination. As Iranians, we even fullfil our compulsory military duty.

SPIEGEL: Nevertheless, you are excluded from holding political office.

Yashayaie : We Iranian Jews have never aspired to a career in politics or the military.