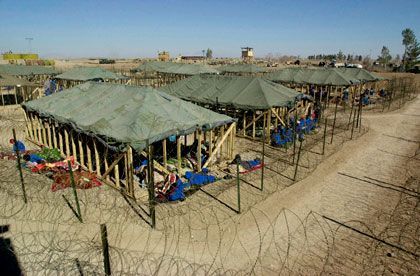 A US prison in Afghanistan for al-Qaida and Taliban fighters.

That all-important piece of evidence is pitch black and about 20 centimeters long. It's a single strand of hair from the head of Khaled el-Masri, 41, and spent most of its life heavily oiled and slicked back. Now, the hair has become a global player; current German-American relations largely hinge on it.

El-Masri, namely, is part of one of the most unusual criminal cases in recent years. The father of four claims he was kidnapped by United States agents one year ago in Macedonia, carted off to a prison in Afghanistan, and accused of being an al-Qaida terrorist. The tress from his do may be able to confirm his story. Scientists at the Bavarian archive for geology in Munich are currently using a method called isotope analysis, which can search for trace elements such as sulphur, to roughly determine where in the world el-Masri has been in recent months. Munich's Ludwig-Maximilians University is world famous for the procedure -- in fact, isotope analysis has helped solve many difficult crimes in the past.

According to initial results, el-Masri's story is, in fact, true. Fearing far-reaching global diplomatic consequences, the German government, however, wants to see the case treated rather discretely. After all, el-Masri's allegations are not directed at some random rogue state but at the most powerful nation in the world and a close partner of Germany's. Government officials here are concerned: The explosive topic shouldn't, under any circumstances, harm trans-Atlantic relations now that there has been, with US Secretary of State Condoleezza Rice's visit to Europe last week, the first noticeable sign of rapprochement between Germany and the US since the Iraq conflict.

Another key aspect in the big picture is, of course, President George Bush's visit to Mainz next week. Officials feel that nothing should be allowed to cast a shadow over that event, either. After all, Chancellor Gerhard Schroeder's government just recently sighed in relief when the German federal prosecutor's office dismissed war crimes charges against US Secretary of Defense Donald Rumsfeld for the torture scandal in Iraq's Abu Ghraib prison.

Germany doing what it can -- quietly

Still, no state in the world can just look away when a foreign nation kidnaps and deports one of its citizens and acts as if it were outside or above the law. Nevertheless, German Foreign Minister Joschka Fischer's response was a grumbling "no" when asked if the case was on the agenda for his meeting last week with Rice.

Yet while keeping the case low-profile is considered vital, some steps at resolution have been made. German Interior Minister Otto Schily, the only German minister who was a loyal friend to the US even during the Iraq war, headed to Washington recently to visit with CIA director Porter Goss. One of the points on Schily's agenda was likely an attempt to explore whether another "el-Masrigate" can be avoided in the future. Berlin wants assurance that this was a one-time lapse. At the request of the Justice Ministry, the Foreign Ministry, and the Chancellory, the German intelligence services had done their homework before Schily's visit. Sure enough, the Americans quietly admitted to kidnapping el-Masri and vaguely implied how the whole matter had somehow gotten out of hand. 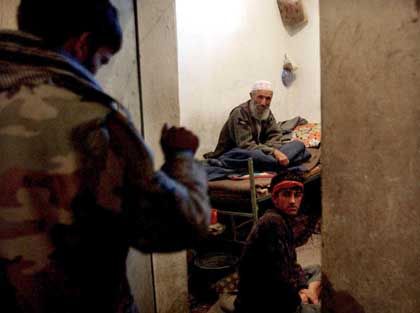 El-Masri may have been kidnapped by American forces and brought to an Afghanistan prison.

One of the key figures in the deadly Sept. 11 attacks, the Hamburg-based Yemenite Ramzi Binalshibh, told the CIA of a coincidental meeting he had once had on a train ride. He was told of a man by the name of "Khalid al-Masri" who had apparently urged Mohammed Atta's Sept. 11 pilot crew to get training in Osama bin Laden's camps in Afghanistan. Binalshibh was also told that this man "al-Masri" had helped Atta's men establish contact with a senior al-Qaida member in the city of Duisburg in western Germany's Ruhr region.

It's still not clear who this mystery man really is, even though he popped up in the official report of the Sept. 11 commission. The CIA and FBI have both been looking for the alleged contact, but so far, all efforts have been in vain.

At one point, the authorities thought they had him cornered, in the southern German town of Neu-Ulm not far from Stuttgart. That's where the Lebanese-born el-Masri, who's been a German citizen since 1995, lives and where his kids attend a Christian kindergarten. According to the authorities in Neu-Ulm, el-Masri is a well-integrated member of the community, although he is known to have close ties to a multicultural house in town being observed by German authorities as a known Islamist hotspot. El-Masri allegedly had contact with Reda Seyam, a suspected al-Qaida member, though authorities never found any concrete evidence that el-Masri engaged in any sort of terrorist activity.

In Germany, the information on el-Masri isn't even enough for authorities to launch an investigation. The situation in the United States is completely different, though: Following Sept. 11, US President George W. Bush has authorized American agents to act outside of all internationally accepted legal norms in the fight against terror.

Thus, the first opportunity was to be used to ferret the suspect from Neu-Ulm off to be interrogated in the secret prisons in Afghanistan. On Dec. 31, 2003, el-Masri boarded a bus in Munich bound for Macedonia. He was looking, he said later, to get some time away. A week of vacation in Skopje seemed just the thing. He and his wife had fought heavily, el-Masri claimed. When he crossed the Serbian-Macedonian border, patrols pulled him off the bus.

All explanations were in vain as three armed Macedonian men in street clothes took him to a hotel. After three weeks of interrogations, one of the Macedonians told el-Masri that "the matter is now no longer in our hands." El-Masri recalls that seven or eight masked men put some diapers and a dark-blue training suit on him, before bringing him to an airplane, fastening him up tight with a seatbelt and then sedating him with an injection.

In a city that el-Masri believes was Kabul, several masked men with American accents beat him, he claims. Tied up with handcuffs and foot shackles, a man of Lebanese descent relayed the cold, hard truth to him: "You are in a country where the laws don't apply to you."

Following endless interrogations, a hunger strike, and permanent proclamations of innocence, el-Masri says he was flown to Albania one day and then transported back to Macedonia in a car. Aboard the plane a man passed on an important news item to him that helped el-Masri place events in a proper timeframe: Germany has just elected a new president. It was May 28, 2004.

Maybe the whole case would have never become a heated political issue if the German investigators hadn't worked so tirelessly and thoroughly. The Munich-based state prosecutor Martin Hofmann, who at least officially is investigating against unknown perpetrators, is now fairly convinced that el-Masri isn't lying: "There's just no indication that he is."

The prosecutor has checked the basic parameters of el-Masri's testimony. The bus driver, for example, testified that el-Masri really sat in the vehicle that left Munich on New Year's Eve 2003. El-Masri was on board until they reached the Macedonian border, but not for the remainder of the trip. In addition, there's a stamp of entry in el-Masri's passport dated Dec. 31, 2003, as well as an exit stamp from Jan. 23, 2004 -- the day he was apparently flown to Afghanistan.

Working through the Federal Bureau of Criminal Investigation, the state prosecutor sent inquiries to the police authorities of all countries allegedly involved: To the FBI, of course, but also to the Macedonian, the Albanian and the Afghani authorities. The FBI said it would cooperate as much as possible, but avoided any specific response to the inquiry from Germany.

But even without that help, the German investigators have made some progress. Because el-Masri claimed that he felt a trembler during his imprisonment, they checked for earthquakes in the Hindukush last year. Sure enough, the seismographs detected several quakes between Kabul and Kandahar, and that, in turn, corresponds with the preliminary result from the isotope analysis. It provides important information indicating that el-Masri was, in fact, in the region at the time. "That's a key part of the puzzle," say investigators.

State prosecutor Hofmann is, therefore, confident that the real circumstances behind the story -- which some parties don't want to be made public -- will be known at last.