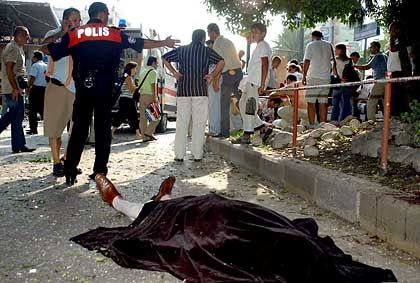 "A source of despair": Kurdish terrorists have launched a number of recent attacks in Turkey.

No ferries sail to Imrali, a prison island in the Sea of Marmara, southwest of Istanbul. Lawyers and other visitors who wish to make the one-hour crossing need special permits and travel by military boat. Masked Special Forces guard the docks, and visitors submit to strict security checks. The island has exactly one prisoner: Abdullah Öcalan, 58, leader of the banned Kurdistan People's Congress (PKK) and Turkey's Public Enemy Number One, serves his life sentence here.

Turkish authorities believe a string of recent attacks on tourist destinations in Turkey can be traced back to Öcalan, although his separatist party renounces killing civilians. Confinement on an island, in any case, has done nothing to damage his mystique. Thousands of PKK supporters revere him as an idol; Kurdish solidarity committees organize campaigns throughout Europe for the man they call "Apo," and the PKK even declared 2006 the "Year of Mass Support for President Apo."

And then there are the Kurdistan Liberation Hawks (TAK), the radical splinter group whose members are willing to murder for Apo. Last week the TAK -- which has nothing, officially, to do with the PKK -- carried out a series of attacks on tourist targets at beach resorts in southern Turkey and in Istanbul. Three people were killed in Antalya, and almost a hundred were injured. The influential Turkish columnist Mehmet Ali Birand warned that Kurdish terrorism was entering a "new, dangerous phase."

"As long as Apo is still being held by the fascist Turkish government," the extremists said in a statement, "our attacks will continue." They threatened to turn all of Turkey into "hell" and warned tourists against travelling there.

But what do they want? Do these terrorists believe that they can bomb Öcalan out of jail? A court in Ankara only recently ruled against a retrial despite the European Court of Human Rights describing the original Öcalan trial as "unfair."

Probing the Roots of Terrorism

Turkish security authorities now want to work out who's behind the TAK bombers and what role Öcalan's PKK is playing. Despite his incarceration, they are pretty sure Öcalan still pulls the strings. They believe he passes orders to the outside world through his lawyers.

The PKK, which used to be called the Kurdistan Workers' Party but renamed itself after Öcalan's arrest, has condemned the recent bomb attacks and expressed sympathy for the victims. It behaves as if it had nothing to do with the "Liberation Hawks." However, Turkish politicians like Abdurrahman Kurt, chair of the conservative Justice and Development Party in Diyarbakir province and himself a Kurd, thinks the TAK is just a particularly militant wing of the PKK. "Its a tactic," he says. "The PKK says it wants to use political means, and meanwhile it leaves the TAK to go on bombing." The PKK is trying to make itself a compelling negotiation partner. "Their message is: If you talk to us, we can stop the extremists."

It is striking that the first time the TAK carried out any attacks -- the bombing of two small hotels in Istanbul in 2004 -- was shortly after the PKK had renounced their 1999 cease-fire. While the PKK militia have been concentrating on military targets since then, the TAK has deliberately targeted civilians -- tourists in particular.

So far the police have managed to arrest only one suspected terrorist. He intended to carry out an attack on the port city of Izmir, obviously to coincide with the attacks in Antalya and Mararis. He is said to be a PKK member who admits to having trained at a PKK camp in northern Iraq. Investigators found 2.5 kilograms (about five pounds) of Semtex explosives in his apartment. He wanted to set off the incendiary device, made from a camping gas cylinder, in the city's exhibition center.

But Öcalan, the prisoner of Imrali, has made a few friendly noises. He's indicated that he would be prepared to call for a cease-fire if the government in Ankara made certain legal promises. The PKK, he says, would even be prepared to hand over its weapons. One of the demands is that "Kurdish identity" should be anchored in the constitution. The Kurds want to be "citizens of Turkey" -- which would represent a rejection of the old aspiration for a separate Kurdistan.

Prime Minister Tayyip Erdogan has met the PKK offer with silence. His government will stick to its principle of no dialogue with terrorists. It knows that many Kurds in the southeast also want an end to the violence. The distinguished Kurdish politician Serafettin Elçi publicly attacked the PKK recently, calling it a "source of despair."

The violence has been going on for 22 years. "Our afflicted region," says the Kurdish writer Seyhmus Diken, "is tired of fighting."