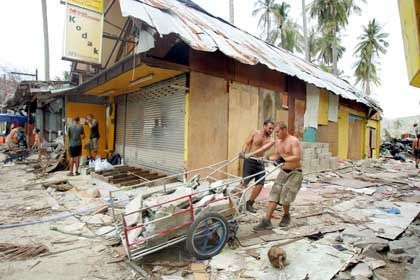 Reconstruction work on the Thai island of Koh Phi Phi. Large investors are trying to snap up the best sites.

Three months after the tsunami catastrophe, Pronthip Khongsong from the small, Thai fishing village of Laem Prom trudges across the sand where her village once stood, fighting back tears. She used to run a small restaurant right on the sea and nestled under her small copse of palm trees. She also had a couple of beach huts she rented out to tourists.

Now, however, she has nothing. The devastating monster wave of Dec. 26 tore everything away. In addition, her mother, her sister and her small niece were all killed.

The village itself, located on the Andaman coast north of the holiday island of Phuket, has also disappeared. Only a few foundations of buildings and some sturdy palms remain; mattresses are scattered about. A few photos that were fished out of the ocean are posted on one of the trees -- they show an old woman, a monk and a blue mountain lake.

Investors trying to drive away residents

Despite the disaster, Pronthip and her neighbors wanted to immediately rebuild their homes after the water subsided. That, however, proved to be more difficult than they thought it would be -- and it wasn't just the money that was lacking. A powerful corporation, known as The Far East Company, has other plans for the land. It has already claimed 32 hectares of nearby coastal land and is telling villagers -- even those who once lived there -- to stay away. The company wants to transform the former fishing region into a brand new holiday paradise.

Since the plans have become known, an atmosphere of fear has dominated Laem Pom. Pronthip herself says she feels like she's being followed "by a mafia," and her neighbor Ratree Kongwatmai reports that just after the deadly wave, men she had never seen before tried to stop her from returning to her destroyed property. The close to 50 families of Laem Pom are doing what they can to confront the threat and to show that they are serious about not giving in. They've erected a small tent city, they've marked out foundations and they've purchased construction materials. 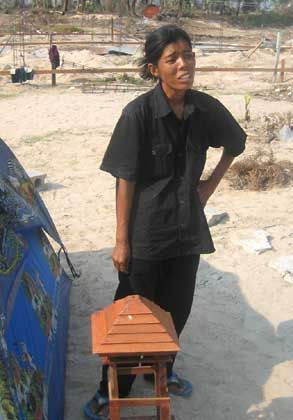 Yuphin Choprasi lost her family in the tsunami. Now she is fighting to remain where they died.

"I want to live on the land where my family died," says Yuphin Choprasi, a gaunt woman dressed in black, who has set up a small shrine to the tsunami victims in front of her blue tent in order to appease the spirits.

Laem Pom isn't the only place where residents in Thailand are fighting to keep their land these days. After the tsunami destroyed large parts of the islands on the west coast of the country, investors began scoping out places to develop new beach resorts complete with shiny new bungalows and hotel facilities. In the process, they have become famous for being inconsiderate and ruthless. Indeed, the gentle Siam so often advertised in Thai travel brochures is hard to find here these days.

Fight for land is not new

A few kilometers north of Phuket, a group of sea nomads lives in the small village of Taptawan. They too may be forced to move out -- officials have already come to survey the land. "But we didn't let them -- what do they think they're doing," the village elder says. "Before the tsunami, we never saw them and then, suddenly, here they are."

The fight for the best property on the white Andaman Sea beaches is not a new one and it began even before the tsunami disaster. But it is one the villagers seem destined to lose due to the complicated Thai system of property ownership. Millions in Thailand are essentially living on public land without holding any sort of title.

The residents of Laem Pom -- mostly fishermen and former tin miners who used to work at the now defunct mines nearby -- never bothered worrying about ownership rights or property registration. Indeed, many of the villagers didn't even have citizenship documents or even a last name until just a few years ago. Unsurprisingly, they were also unaware that outside investors were trying to get title to the land they lived on. The tsunami gave these efforts to take over the land a significant push. And the rewards could be huge: In the vacation paradise of Khao Lak, prices per square meter of property had reached up to 200 prior to the tsunami. 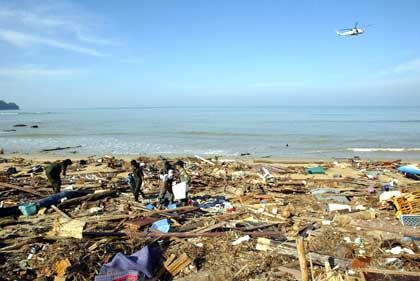 Khao Lak was once a tourist mecca where prices per square meter of property were as high as 200.

But even if the villagers had been well-versed in the concept of property rights, it is unclear that they would now be better equipped to avoid the investor onslaught. Two years ago, Pronthip Khongsong became the only resident of Laem Pom who succeeded in getting her property rights recognized by a court. It was expensive, and in the end threatened to ruin her life. Following the court ruling, gangsters immediately threatened to kill her husband if she didn't abandon her claims to the land. He immediately decided to flee with their son to Bangkok. Pronthip shows a newspaper photo of a well-known Mafioso being detained by the police. "He was here," she says, pointing at the criminal.

The villagers have not been left completely alone in their struggles. Some non-governmental organizations and politicians are trying to help flood victims quickly rebuild their houses. Yet despite their efforts, an estimated 10,000 residents along the Andaman Coast are at risk of being evicted from the villages and regions where they lived before the tsunami.

"I am outraged that our country can allow something like this to happen," says Kraisak Choonhavan, a member of the Thai Senate. "For the residents, it is like a second tsunami, heartless and vile."

The Senator is pessimistic when asked what chances the villagers have of prevailing in the current conflict. "They have no influence, whereas the businessmen have lawyers, money, and contacts as high up as the parliament and the government." In addition, Kraisak believes, the property office is "the most corrupt agency in the entire country." 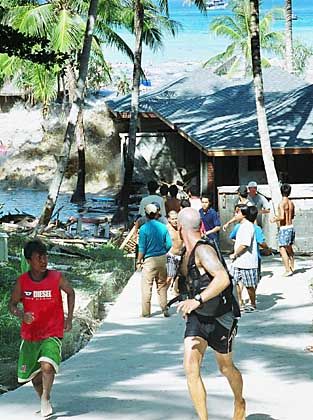 Rebuilding after the tsunami in Thailand has revealed corruption and heartlessness in the government.

Indeed, the priority for the Bangkok government is getting tourists back to the beaches of Thailand as quickly as possible. And with much of the Thai economy dependent on tourism, villagers are almost sure to lose out. The new hotels in the tourist paradise of Khao Lak, for example, are to be built a bit further from the beaches -- on the same exact spot where thousands of tsunami refugees are still living in makeshift barracks.

How successful the tourism mecca will be in achieving its goal of a well-thought-out and systematic reconstruction of the region remains to be seen. On the island of Koh Phi Phi, for example, the business people who once crowded the stunning vacation paradise with their boats, bungalows and bars (or, as Kraisak says, "transformed it into a slum,") are doing all they can to resist being pushed back from the beach. Just like the fishermen, these small entrepreneurs are skeptical of the project. It is, they say, merely a conspiracy of officials, politicians and large investors who want to reserve the best spots for themselves.