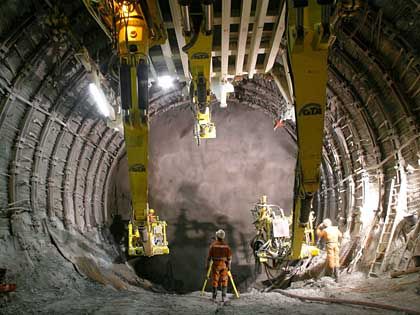 The new Gotthard railway tunnel in the Swiss Alps will be the longest in the world.

The unmanned elevator races down the shaft and comes groaning to a halt right in the warm, damp belly of the Tgom mountain. Perfectly on schedule, it will shortly take half a dozen construction workers almost one kilometer (0.6 miles) up to the mountain's surface.

Almost 1,000 meters of mica slate and gneiss lie above the enormous rocky cavern. Warm water seeps through its walls. An elaborate ventilation system lowers the air temperature in the huge space from more than 40 degrees Celsius (104 degrees Fahrenheit) to about 28 degrees (82.4 degrees Fahrenheit).

The construction workers are breathing heavily. At the end of their shift, they stand waiting in the half light behind a security barrier. They're wearing white helmets and carrying flashlights, as well as backpacks with oxygen masks. Spending more time than necessary near the ventilation shaft is prohibited, due to the risk of falling boulders. Grubby signs hang everywhere with the warning message "Stop risk."

This uncomfortable pit lies beneath the mountain village of Sedrun in the canton of Grisons. The Swiss are building the world's longest railway tunnel here: the Gotthard Base Tunnel. Since 1993, excavation work has been going on at this construction site and three others. A total of 13 million cubic meters (459 million cubic feet) of rock -- the equivalent of five Cheops pyramids -- will have to be removed from the mountain massif so that high-speed trains traveling at 250 kilometers an hour (155 mph) will be able to race through the Alps ten years from now. 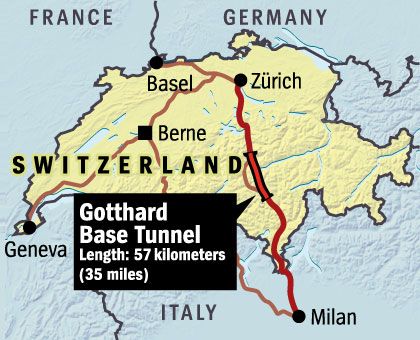 The Gotthard tunnel will greatly cut travel times between Zürich and Milan.

Two thousand workers are filling eight-hour shifts around the clock inside the tunnel shafts. Two thirds of the total 153.5 kilometers (95.3 miles) of tunnels, galleries and shafts have already been carved out of the mountain. The rock in Sedrun is so fragile that it's not possible to use drilling machines; the construction workers use explosives to laboriously blast through up to six meters (19.7 feet) a day.

In some places, the tunnel needs to be supported with massive steel arches every 30 to 40 centimeters (12 to 16 inches). Between the arches, metal grids and sprayed concrete hold back the loose boulders. The tunnel walls have been covered with reflectors to help the construction workers keep track of whether the walls are shifting, despite all the precautions taken. An ominous cracking sound can be heard frequently -- as if the ancient rock were protesting against the work.

Portal to the mountains

Construction of the mega-tunnel will cost some €5.5 billion ($7.2 billion), according to current estimates -- over €1 billion ($1.3 billion) more than originally planned. When it is finished, it will cut the travel time between Zürich and Milan by one hour, to two hours and 40 minutes.

The gentle gradient along the length of the tunnel means that the fastest cargo trains will be able to race through the Gotthard massif at a speed of 160 kilometers an hour (99 mph) -- twice as fast as on the existing Alpine train routes. Cargo trains weighing up to 4,000 metric tons (4,409 US tons) -- twice the current maximum weight -- will be able to use the route. The result will be more freight traffic on the railway, and fewer trucks trying to make their way through the chronically congested Gotthard road tunnel -- or at least that's what the tunnel's engineers hope. 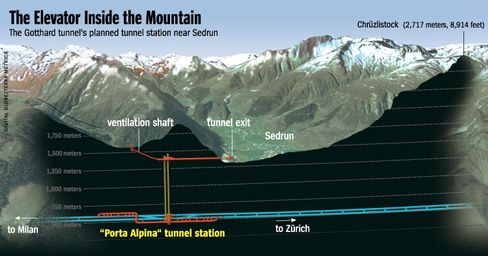 From the "Porta Alpina", passengers will have easy access to the ski slopes.

Just by itself, the mega-tunnel is already one of the great construction projects of the century. But the elevator to the underworld that is currently taking workers down to their workplace is even more spectacular. The canton's inhabitants have great plans for it: They want to transform the dark construction site beneath the Alps into a portal to the mountain kingdom, to be called the "Porta Alpina."

From 2016, the elevator that is currently transporting workers, machinery and tons of smashed rock should be available to rail passengers, taking them in a few minutes from an underground train station to Sedrun, a village of 1,500 inhabitants on the surface of the Gotthard massif. From there, the travelers would be in easy reach of the ski slopes or be able to go hiking in the picturesque Alpine meadows.

Tourists could then take the Glacier Express train to glamorous holiday resorts like St. Moritz or Zermatt. The Grisons canton would become far more accessible -- and hence more attractive as a tourist destination -- for people from the densely populated regions to the north and south of the Alps. Zürich would be just one hour away, Milan only one-and-a-half.

The elevator will carry tourists 800 meters to the surface.

At first, the Porta Alpina was just the crazy vision of two old schoolfriends, Marc Cathomen and Arthur Loretz. Cathomen sits in his office in Ilanz, his gaze flitting from one of his two computer monitors to the other. "Arthur and I are always talking about crazy ideas," the 36-year-old computer scientist says with a smile. "But building a train station in the tunnel near Sedrun seemed perfectly logical to us." After all, it had always been planned to include a train station in each of the two tunnels -- although those stops were originally intended to be used only in emergencies, for example to evacuate passengers in case of fire.

Five years ago, Cathomen and Loretz began promoting their project among the people of the Surselva region. They worked their way tirelessly around the pubs where the locals liked to meet, gave public lectures and collected signatures. The local people quickly forgot their initial skepticism. They understood that the apparently crazy idea could spell salvation for their region, which has long suffered from depopulation and declining tourism.

Finally the politicians also accepted the idea of a train station inside the mountain. A feasibility study prepared by Switzerland's federal transportation agencies and the canton of Grisons reached the conclusion that the Porta Alpina was not such a stupid idea after all. Converting the emergency stop into a train station suitable for tourists could be achieved with around 50 million Swiss francs (€32 million, $41 million). One train from the north and one from the south could stop at the station every hour without delaying the rest of the rail traffic.

The risks for passengers would be minimal. The authors of the feasibility study believe a fire in the tunnel is "very unlikely." The worst thing that could happen would be that a power outage could cause the elevator to stop in the shaft for a short time, but that would be less than an hour at most. 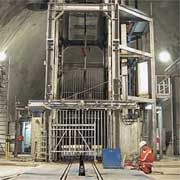 The elevator races upwards at a speed of 12 meters (39 feet) per second.

What will it be like racing 800 meters (2,625 feet) skyward after a comfortable train journey? Traveling in the spectacular elevator has become just another everyday experience for the workers waiting to knock off work in the stuffy rock cavern. "It's best to close your eyes when the elevator starts," says chief engineer Alfred Seiler. "The wind can be pretty intense."

The trip on the Alpine ghost train begins. The steel cage races through total darkness at a speed of 12 meters (39 feet) per second. The bars which form the elevator walls hardly give any protection from the wind. Your eyes begin to stream with tears and your ears get blocked.

The eerie experience is all over in less than two minutes. Once you've reached the top, it's time to step onto a rickety train, which travels horizontally through a dark access tunnel for one kilometer. Then you finally glimpse the light of day -- and suddenly find yourself with a view of a stunning mountain panorama.

If the Porta Alpina project is completed, the elevator would of course look a little different -- it would inspire a bit more confidence, with two storys and room for up to 80 people. Passengers would wait for the elevator to depart at one of four waiting rooms -- two in each of the two tunnels. To stand waiting by the train tracks would mean risking death: Incoming trains create enormous pressure waves which could blow waiting passengers away.

Grisons' director of construction and traffic affairs, Stefan Engler, depends on the support of the other cantons around the Gotthard massif in order to be able to carry out the prestigious construction project. Speaking in his office in an old villa in Chur, he is very enthusiastic. "The Porta Alpina would be unique in the world," he says. "It would be a symbol for the mountain regions' powers of regeneration."

The cantons of Grisons, Uri, Valais and Ticino have to develop a common plan for the Gotthard region by the beginning of next year. In it, they will have to explain how the region will benefit from the Porta Alpina in the long term. The Swiss government will base its final decision on their report.

The project stands a good chance of being approved. Berne recently gave the go-ahead for the necessary preliminary work. Construction workers are now starting to blast the four future waiting rooms out of the rock. That will end up costing €10 million ($13 million). Half of that sum will be paid by the Swiss federal government, the other by the canton of Grisons.

Whatever the final decision, the self-proclaimed "highest elevator in the world" has already become a tourist attraction. The construction company Alptransit Gotthard AG -- a subsidiary of Switzerland's railway operator Schweizerische Bundesbahnen (SBB) -- is letting a maximum of 15 visitors a week use the elevator to travel down to the construction site. Despite a ticket price of €60 ($79), the trips into the mountain are already booked out until the end of 2007.