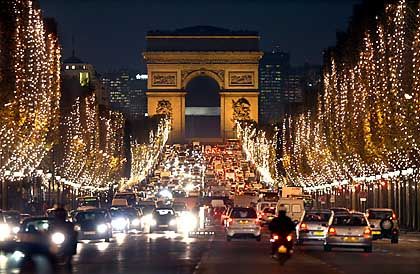 The Champs-Elysees Avenue in Paris risks turning into a cheap retail drag.

Fifth Avenue might be longer, the skyscrapers on Causeway Bay are taller, Bond Street is more fashionable and Ginza more exotic, but voilà -- when it comes to flair, and that typical French mixture of prestige and exclusivity, then the grandest thoroughfare in Paris beats the main drags of New York, Hong Kong, London or Toyko hands down. "Les Champs Elysées" -- directly translated it means the fields of paradise.

Visitors to Paris often consider the stroll from the Arc du Triomphe down to the Place de la Concorde to be the emotional highlight of their trip, especially at this time of year, when the avenue shimmers in a sea of Christmas lights. Locals on the other hand with patriotic modesty call the two-kilometer-long street "the most beautiful avenue in the world."

And they hope that it remains so -- even if, over the past 300 years, the boulevard, designed by Louis XIV's genius landscape gardener Le Nôtre, has evolved from a tree-lined walkway to a shopping strip with ten lanes of traffic.

Sure, the exhaust fumes and the up to 500,000 visitors a day sometimes give the impression that the street is just one vast closing-down sale. But still, when it comes to big celebrations like that for the World Cup victory in 1998, the spectacular millennium party, or the annual national holiday on July 14 -- then the 70-meter-wide stretch of the Champs Elysées serves as a stage for the self-image of the French Republic.

Now this symbol is facing a new danger -- the rampant onslaught of cheap stores is eating away at the avenue's charm. Cafés and bistros have given way to pizzerias and fast-food joints; astronomical rents -- between €5,000 and €10,000 per square meter, are pushing out traditional restaurants and cinemas. Instead the street is dominated by luxury shops, like the pompous Louis Vuitton store, or giant mega-stores for the Gap, Nike or Adidas. "The Champs Elysées is being colonized," a Paris blog exclaims, "and the French aren't lifting a finger."

Will all of Paris soon be in the inescapable stranglehold of international brands? Perhaps not, now that the left-wing city government has openly declared its opposition.

The city government recently commissioned a study by a London consultancy, Clipperton Development, and were alarmed by the results. The urban planning gave their diagnosis for Paris: A dangerous monoculture was developing on the avenue -- 102 of the 332 shops were only selling clothes. If the onward march of fashion centers, huge sports stores and high street clothing chains wasnt halted, then the British experts warned that the Paris landmark risked becoming just a "banal supermarket."

Even worse: The Champs Elysées risked the fate of London's Oxford Street -- which has turned into a faceless shopping street, full of junk shops and cheap chain stores. "Even now," London's Sunday Telegraph sympathetically stated, the street, "doesnt seem very French any more."

Public officials in Paris seem to have been deeply affected by this horror scenario. Deputy Mayor Lyne Cohen-Solal, a Socialist who is in charge of trade issues, had a concrete opponent in mind: the fashion retailer Hennes & Mauritz (H&M), which had hoped to open a new Paris branch on the Champs Elysées in 2008.

These plans seem to have been shipwrecked in the face of Gallic resistance: The city administration's authorization committee has voted to impede the Swedish conglomerate's ambitions, with no dissenting voices and only one abstention. "We have nothing against H&M," Cohen-Salal announced, "but the Champs Elysées is at a turning point, the avenue risks losing its soul."

The dispute over Number 90 Champs Elysées is not just about a new tenth branch of H&M in Paris. Star architect Jean Nouvel had designed a flagship store for the Swedes, with 2,800 square meters of ultra modern retail space. This pushed the French past their pain threshold.

The Swedish company now wants to appeal to a higher national authority to make the decision. The retailers on the Champs Elysées are quietly pleased with the veto against their Scandinavian competitor. "It was more than just another boutique," says the spokesperson for the local trade association.

"The colossus has been denied," cheered the newspaper Le Parisien. And the mayor of Paris's XIII district is confident that H&M's plans been withdrawn for good. "We only want to protect our cultural inheritance," says Francois Lebel, "so that our beautiful avenue does not become an über-dimensional shopping alley."