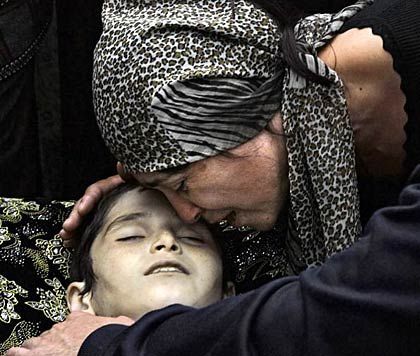 Most of the defendants forced to sit behind the iron bars in Russian courtrooms find them humiliating. But for 24-year-old Nur-Pashi Kulayev, on trial on charges of terrorism, organized gang crime, and hostage-taking, the bars in Vladikavkaz' high court - as thick as an arm - could be live savers.

According to officials, this father of two from the Chechen village of Stary Engepoi is the only survivor of the terrorist group that seized control of School No. 1 in Beslan on September 1 last year, taking 1,120 hostages in the process. During that attack in the Russian constituent republic of Northern Ossetia, 330 people were killed in three days, including 186 children. Another 783 victims suffered severe injuries, the scars of which some will carry for the rest of their lives. When the proceedings against Kulayev began on May 17, the black-clad mothers of Beslan who were in the courtroom screamed curses, threatened to lynch him and swore revenge.

But the more the man said in court, the quieter and more attentive the witnesses became.

What Kulayev told the court contradicts the official version of what happened during the tragedy and confirms the worst fears of the victims' families: the explosion on September 3 in the school's gym, according to him, was no coincidence. He testified that a Russian sniper hit one of the hostage-takers who had his foot on a trigger mechanism. The explosions and the Russian forces' subsequent assault on the school were a direct consequence of the sniper's shot, said Kulayev. 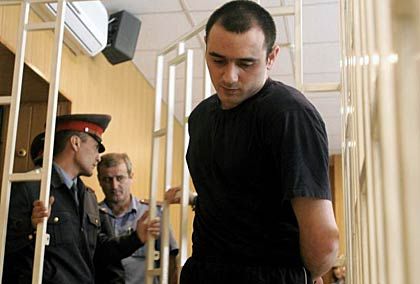 Kulayev has little to gain from his testimony; no matter what he says, he can hardly expect leniency from the court. A life-sentence is almost certain in his case. But by assigning partial blame for the tragic finale to the Russian security forces, Kulayev has at least saved face among the relatives of those who died and his fellow countrymen.

"Help us," an orphaned mother, seemingly motivated by utter desperation, occasionally yelled at Kulayev during the trial. Many of the Beslan victims' relatives have given up hope. They don't expect any state help in their quest for the truth.

Previously unreleased documents by the national commission in Moscow investigating the Beslan tragedy, made available to DER SPIEGEL, confirm relatives' fears. Instead of calling for self-criticism in the wake of the disaster at Beslan's School No. 1, the commission recommends that the Russian government crack down harder on terrorism.

The key proposals in the paper are:

While all of these measures may fit nicely into Russian domestic policy, they do not correspond with those details which emerged from an analysis of the commission's collected findings.

From the beginning, Alexander Torshin had high expectations. The chairman of the 20-strong investigation commission, which consists of members from both chambers of the Russian parliament, announced in September 2004 that eye witnesses and heads of the security forces would be called to testify. The Beslan working group would "not be any worse than the US commission investigating the 9/11 terrorist strikes."

Indeed, in addition to politicians and leading secret-service agents, the commission questioned those directly affected by the hostage drama as well as critical journalists. The commission's draft final report - previously unpublished - stated that "there was a systematic failure of security structures" in the neighboring Republic of Ingushetia, whose border runs near the town of Beslan.

When the authorities launched their anti-terrorist strike, they "were unable" to effectively seal off the district around the school, the report said. Police, security forces, and army also did not cooperate as closely as needed. These conclusions evoke memories of the final report by the 9/11 commission, which stated that security branches failed to anticipate the attacks largely due to a lack of cooperation with one another, faulty analysis and incorrect conclusions.

But in areas where the US commission - consisting of equal numbers of Republicans and Democrats - laid out some painful truths in the wake of a lively, public debate, its Russian counterpart held discussions behind closed doors.

The Beslan committee is dominated by delegates loyal to the Kremlin and under strong pressure from the general prosecutor's office, which is worried that its own version of events may be discredited. The committee has postponed the report's release, originally scheduled for March, several times. An October release date is now being discussed.

The Kremlin is counting on committee chairman Torshin to keep things from getting out of hand. Torshin was once a lawyer connected to the Central Committee of the Communist Party of the Soviet Union and later in the Putin administration. In the working papers made available to DER SPIEGEL, there is no trace of criticism of Interior Minister Rashid Nurgaliyev or the head of the secret service, Nikolai Patrushev.

There would be enough reason for reprimand. As security forces stormed the school, the regional head of the secret service announced that the Beslan terrorist group consisted of "nine Arabs and a negro." Two months later, prosecutors said that 27 of the 32 hostage-takers had been identified. But five months later, that same authority announced that no more than 20 identities could be verified.

Worse even is a suspicion, supported by evidence, that is being voiced by both members of the Beslan citizens' committee and members of the commission in Moscow. Yuri Savelyev, a committee member and delegate of the Rodina (Homeland) faction, asserts that the Russian army's special forces unit used flamethrowers when storming the school on September 3 - with fatal consequences. "Most people died because they were buried underneath the burning roof which collapsed." A report published by the military prosecutor in Vladikavkaz and cited in the daily paper "Moskovsky komsomolez" confirmed that authorities fired at the school four times with a flamethrower and a T-72 tank, "which could be deadly for hostages." Will these kinds of sensitive details be included in the commission's final report in the fall? The relatives of the Beslan victims are skeptical.

"So many children are dead, and no one has taken responsibility," said Lyudmila Tuayeva, glancing toward the charred ruins from her house, located at 37 School Lane. Tuayeva lost her daughter Inna in the burning school.

Only 100 meters away from her, a few cranes tower in the Beslan sky. They have been there for a while now, along with the workers who have been brought in to lay bricks. Progress is fast; there are three shifts a day. Russia's highest construction authority has decided to build two new schools here, each with three stories, a lot of space and a pool.