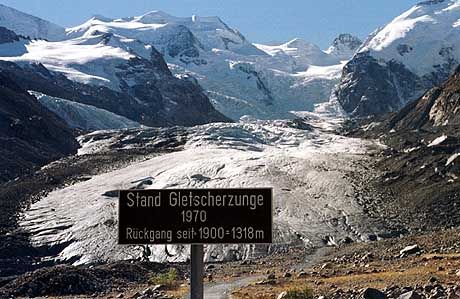 The Morteratsch glacier in Switzerland has retreated by 1.5 km since 1900. Some scientists believe that glacial fluctuation could be a more normal development than previously thought.

He may not look like a revolutionary, but Ulrich Joerin, a wiry Swiss scientist in his late twenties, is part of a small group of climatologists who are in the process of radically changing the image of the Swiss mountain world. He and a colleague are standing in front of the Tschierva Glacier in Engadin, Switzerland at 2,200 meters (7,217 feet). "A few thousand years ago, there were no glaciers here at all," he says. "Back then we would have been standing in the middle of a forest." He digs into the ground with his mountain boot until something dark appears: an old tree trunk, covered in ice, polished by water and almost black with humidity. "And here is the proof," says Joerin.

The tree trunk in the ice is part of a huge climatic puzzle that Joerin is analyzing for his doctoral thesis for the Institute for Geological Science at the University of Bern. And he is coming to an astonishing conclusion. The fact that the Alpine glaciers are melting right now appears to be part of regular cycle in which snow and ice have been coming and going for thousands of years.

The glaciers, according to the new hypothesis, have shrunk down to almost nothing at least ten times since the last ice age 10,000 years ago. "At the time of the Roman Empire, for example, the glacier tongue was about 300 meters higher than today," says Joerin. Indeed, Hannibal probably never saw a single big chunk of ice when he was crossing the Alps with his army.

The most dramatic change in the landscape occurred some 7,000 years ago. At the time, the entire mountain range was practically glacier-free -- and probably not due to a lack of snow, but because the sun melted the ice. The timber line was higher then as well.

The scientists' conclusion puts the vanishing glaciers of the past 150 years into an entirely new context: "Over of the past 10,000 years, fifty percent of the time, the glaciers were smaller than today," Joerin states in an essay written together with his doctoral advisor Christian Schluechter. They call it the "Green Alps" theory.

Joerin admits his theory goes against conventional wisdom. "It is hard to imagine that the glaciers, as we know them, were not the norm in past millennia, but rather an exception," he says while he and his companions dig out the tree trunk with shovels, axes and bare hands.

Indeed, critics accuse him and his colleagues of relying on a thin and ambivalent layer of facts. The Green Alpinists respond to the argument their own way: with a large orange chain saw. Kurt Nicolussi, a slender man in his late 40s, slices a slab of wood as large as a wiener schnitzel out of the trunk and analyzes it. "At least 400 annual rings, well preserved, perhaps the best sample we have ever had," he declares proudly. 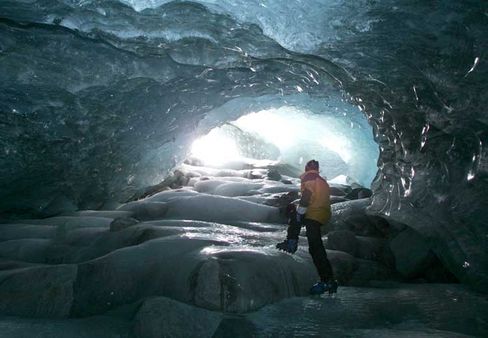 Journey to the center of the earth. Or under the glacier at least.

Nicolussi, professor for Alpine Research at the University of Innsbruck, Nicolussi is a dendrochronologist, something of a tree historian. He records the exact location of the find, carefully packs up the slab and labels it with a new name: "TSC-160" -- find number 160 of the Tschierva Glacier. Under the microscope, the thickness and the shape of the annual rings reveal a considerable amount of detail about the location and the climate conditions under which the tree grew. To date, he has collected and analyzed more than 400 chunks of wood.

Nicolussi's assessment of TSC-160: It comes from a stone pine (Pinus cembra) that lived at least 538 years. "This is not unusual, pines grow extremely slowly, but become quite old," the scientist explains. TSC-160 died approximately 6880 years ago, during the Neolithic Age, somewhere at the foot of Piz Bernina which is today covered with an impenetrable ice shield.

Somewhere along the line, the tree was buried by masses of ice and dragged into the valley where it remained until the glacier set it free again last summer -- a secret message from the Stone Age at a place thought to be covered in "eternal ice."

Although glacier experts like Hanspeter Holzhauser have been collecting remains of plants in the vicinity of glaciers for years, they only began systematically analyzing the finds about 13 years ago.

At first, he and his students collected over a thousand little chunks of wood and shreds of turf on their excursions along the glaciers, from the Engadin in the east to the Unterwallis in the west, from the Forno and Stei Glacier to the du Mont Mine Glacier. Finds include the remains of birch trees, willows, Norway spruce, pines, larch and a lot of the resilient Swiss stone pine.

There is a simple deduction that lends support to the Green Alp theory: The bits of trees that have been washed out of the glaciers must come from further up the mountain. And if trees grew up there, then the mountains could not have been covered by glaciers.

Schluechter sent over a hundred of the old bits of wood to a special laboratory for carbon dating. They discovered that the trees didn't grow up there continually, but rather within ten periods of time since the end of the last ice age.

The dynamic history of glaciers

"The history of the glacial cover apparently is more dynamic than had been assumed until now," says Schleuchter. According to this model, the glaciers were smallest about 7,000 years ago, largest during the "mini ice age" of 1650 to 1850. Since this last cold spell, the tongues of ice have been receding quickly -- for a paleo-climatologist 150 years are just a wink in time.

Schluechter knew that his theory would be a hard sell in professional circles, and he needed more samples to back it up. He came up with a trick to get help: He and doctoral candidate Joerin published an article in the the Swiss Alpine Association's members magazine. At the end they included a plea to "mountain guides, mountaineering schools and hut keepers, to register wood and turf finds. They promised that "Finders would get the next summit drink for free." The feedback was amazing: some 50 envelopes with tips and samples landed in the Institute's mailbox.

Some experts have greeted the Green Alp theory with great interest. They include Stefan Rahmstorf of the Potsdam Institute for Climate Impact Research, who studied Schluechter's results. He too considers it possible that the Alpine glaciers used to be smaller than they are today.

But there are critics. Like Oetzi, the 5,300 year old Stone Age man whose body was found in the Oetz Valley Alps. After all, how could his corpse have remained intact if the ice receded again and again? The Green Alpinists argue that the fluctuation in the glacier level was subject to local influences and did not hold true for the entire Alps region.

Wilfried Haeberli of the Department of Geography at the University of Zurich is a more vocal critic. The extreme warm phases suggested by Schluechter's theory are not compatible with findings derived from ocean sediments, pollen analysis and ice cores. In fact, most climate data proves that since the Ice Age, it has never been warmer than it is today. How, one might ask, could the Alps have been free of glaciers in the Stone Age?

Negating the effect of climate change?

Joerin is quick to explain that he is not trying to explain away the effects of man-made warming of the past few years: "Our findings so far could also be seen as giving the exact opposite of a climatic all-clear," he says. "If we can prove that there were ancient forests where the glaciers are today, it means one thing in particular: that the climate can change more suddenly than we thought."

Up on the Tschierva Glacier the two scientists are especially keen on finding the answers to the most pressing questions of the day: How quickly did the climate change? How quickly did the balance of ice slip from a plus into a minus and back again? The carbon dating method they've been using is far too imprecise for this, which is why the scientists plan to compare their results to the analysis of the carbon rings. For that they need more samples like TSC-160.

Joerin spots the ideal specimen. "Up there, that is a prime example," he says, pointing to a tree trunk in the ice, deep and unreachable. The scientists will have to return at another time, but they have already set a date. By October the glacier will have receded another 50 meters, freeing the tree trunk for the chainsaw and the microscope.