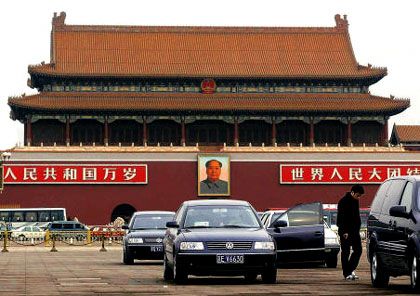 Germany's Volkswagen has been building and selling cars in the People's Republic of China since 1984.

Hu Maoyuan, 53, is fond of parties and celebrations. Only recently, Hu, the head of China's biggest automobile manufacturer, the Shanghai Automotive Industry Corporation (SAIC), celebrated the 20-year anniversary of his company's joint venture with Volkswagen with fireworks and high-ranking dignitaries from VW's hometown of Wolfsburg. Two days later, Hu gave another party, but this time for one of VW's biggest competitors in China, Rick Wagoner, CEO of General Motors (GM). Wagoner was in China to help Hu inaugurate a project for the production of environmentally friendly cars.

Hu is likely to keep on celebrating. The Chinese auto giant just signed a joint venture agreement with British automaker MG Rover. Under this spectacular deal -- which still needs the Chinese government's official blessing -- SAIC will essentially take over the brand. For the first time ever, the Chinese will be able to start exporting cars to a Western automobile market.

In Germany, the only people familiar with the car company's acronym, SAIC, have been industry insiders. Until now, the Chinese state-owned company, a majority of which is held by the city of Shanghai, has been satisfied playing the role of a profitable but unnoticed holding company that enters into joint venture agreements with Western corporations -- thus bringing money and expertise into the country -- whenever it can. People in the auto industry, however, are slowly beginning to wonder whether the Chinese, following the Japanese and Korean lead, are preparing to launch an assault on the European and North American auto manufacturing industries.

It may too be early for such doomsday speculation, but it's obvious that the Chinese have an clear objective in mind: The anticipated takeover of Rover is an important step in China's strategic plan to expand its economy to overseas markets.

SAIC, especially, is dedicated to global expansion. In South Korea, the company acquired a share of that country's second-largest automaker, Daewoo, and it recently acquired the fourth-largest automaker, Ssangyong. This brand, which has acquired technical licenses from Mercedes-Benz, provides the Chinese with important technologies for producing its own SUVs.

SAIC CEO Hu believes that the current offensive is only the beginning. Next year, the group plans to become a publicly traded company on the Hong Kong Stock Exchange, a move it hopes will raise $1.5 billion in shareholder cash. It plans to use these funds to upgrade car manufacturing plants at home and to pay for its ambitious global shopping spree.

Until now, the auto giant has hardly made an impression with its own models. Most of the cars on display in the lobby of SAIC'S 26-floor headquarters building in downtown Shanghai bear the VW and GM logo. So far, the biggest benefit SAIC has derived from the joint venture companies is financial.

When it comes to talking about the future, Mr. Hu is just as secretive as he is about his private life. Like many Chinese executives, he avoids drawing the ire of the government and party by indulging in too much personal luxury. On the surface, at least, the things that are said about Hu seem statesmanlike. He lives in an exclusive residential complex in Shanghai, alongside government bureaucrats and party functionaries. He supposedly has never taken a vacation. It's all part of the myth of Chinese senior executives. And even though Hu does play golf and likes to bowl, it's all business.

His steep rise to the top of his profession is a product of both his ambition and willingness to make sacrifices. In 1968, in the confusion of the Cultural Revolution, he left high school to work in a factory. It was only in 1983, when he had worked his way up to the job of plant manager, that he was able to obtain a degree in engineering from the University of Shanghai. By now, he is one of the controlling figures in China's most important industry. 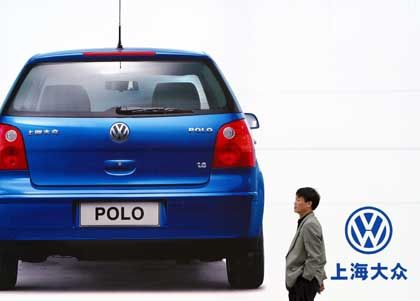 A VW Polo advertisement in Shanghai.

China will soon replace Germany as the world's third-largest automobile manufacturing country. China produced more than 2 million cars in 2003 alone, an increase of 85 percent. In his position at the helm of SAIC, Hu manages a network of 55 subsidiaries and 63 joint ventures for cars and parts. The group employs more than 60,000 people and produced 800,000 vehicles last year, including more than 600,000 automobiles, generating sales of about $12 billion.

There are few types of vehicles SAIC does not produce, but its biggest seller is still the Santana, VW's indestructible model from the 1980s. The car is produced jointly in Shanghai by the Chinese and the Germans, and it dominates the city's streets in the form of taxicabs and police cars.

A yellowed photo hangs on the wall in SAIC's company museum. It depicts former German Chancellor Helmut Kohl, still relatively slim, together with Chinese Deputy Premier Li Peng at the 1984 ceremony celebrating the signing of the first agreement between SAIC and VW. Although the Santana represented SAIC's big jump forward, the Chinese soon became hungry for more.

To encourage a reluctant VW to speed up its transfer of German technology, Hu also convinced GM to enter into an agreement in the 1990s. The Chinese strategy of playing off Western automakers against each other was successful. Nowadays, VW has its current Passat and Polo models produced in China's high-tech manufacturing plants. In addition, R&D has been upgraded considerably. At the same time, SAIC is benefiting heavily from its simultaneous dealings with VW competitors. In June, GM sold more cars in China than the Germans for the first time.

The dispute between his feuding partners, with their constant new expansion plans in China, can only benefit Hu. Whatever the outcome, his company can only expect to augment its own billion-dollar cash reserves. When two foreign competitors fight, China ends up being the winner.

SAIC needs the money for patriotic purposes; Hu knows what Beijing's industrial planners expect of him. They want him to transform SAIC into one of three globally operating auto giants in the People's Republic. The other two are First Automotive Works, another VW joint venture partner, based in the northern city of Changchun, and Dongfen. If government planners have their way, this trio will one day dominate the Chinese auto industry, which is currently made up of about 120 manufacturers.

SAIC has taken an especially dynamic approach to reaching that objective. The group plans to be selling more than a million vehicles per year by late 2007. The SAIC logo, a curved S, will appear on 50,000 cars. By 2010, Hu plans to move up into the ranks of the world's six largest automobile manufacturers. SAIC has already made it to Fortune Magazine's list of the world's 500 top-selling companies -- at position 461.

VW and GM have been eyeing this expansionary trend with increasing suspicion. Only after its partners objected, for example, did SAIC back off from plans to acquire a stake in Chinese automaker Chery. The growing state-owned company headquartered in Anhui Province had built a car that looked like a copy of a VW Jetta. In addition, the Americans were accusing Chery of having copied parts of a Korean-made GM model.

The company's Western partners are also unlikely to be thrilled by Hu's announcement of his plans to "utilize the joint venture companies to build SAIC brand name products." In the Yizheng plant in Jiangsu Province, a five-hour drive west of Shanghai, SAIC employees are currently producing the first car to be sold under the company's own brand name. The model will be called the Sabre, and will look like a station wagon version of the Opel Corsa.

A tour of the dimly lit plant highlights two things: the tremendous hurdles the Chinese have yet to overcome, and their obsessive approach to overcoming those hurdles. The plant's 1,600 workers earn an average of 180 a month. Most of them assemble the basic version of the Santana for VW Shanghai -- about 200 cars a day. About 20 engineers are busy working out the details of the Sabre model.

Last year SAIC produced 2,245 units of the Sabre. That's why the company's own brand-name vehicles are currently only being produced on the plant's assembly lines once a month. But Huang doesn't find this discouraging. "For us," he says, "the Sabre is only the beginning."

To wean SAIC away from its dependence on expensive, imported foreign parts, Hu is trying to convince high-quality suppliers to begin manufacturing in China. German mid-sized companies, which so far have been supplying parts to VW Shanghai from Germany, are being urged to move their production to China. Shanghai is playing a key role as a potential manufacturing site.

In Anting, a Shanghai suburb, Hu and city officials are in the process of developing an automobile manufacturing city. If all goes according to plan, Anting will have been transformed into a sort of Chinese Wolfsburg (VW headquarters in Germany), complete with worker housing, plants, suppliers and research laboratories, by 2010.

One thing Hu knows is that he has to avoid direct confrontation with his Western partners if he wants to achieve his goals. That's why he likes to use an allegory to encourage increased technology transfer. People in hell, says Hu, are forced to slurp their soup, because each person is trying to eat the soup with a spoon that's too long. "But in heaven," he says, "they feed each other."