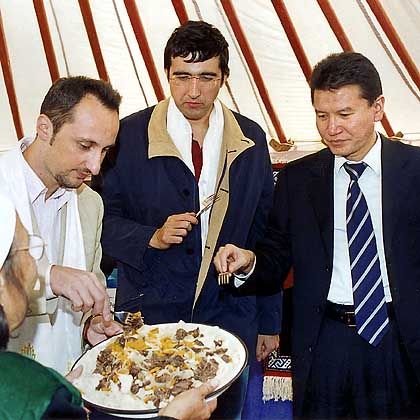 He claims that he can communicate with aliens. Once, he says, he was even taken on a tour of one of their UFOs. "The extraterrestrials put me in a yellow astronaut suit and showed me their spaceship. I was on the bridge. I felt quite comfortable in their company." And who is the lucky space tourist? None other than the president of the Russian Republic of Kalmykia, Kirsan Ilyumzhinov.

The 44-year-old multimillionaire has other interests than just space aliens. In the past, he regularly consulted a Bulgarian fortune teller named Babushka Vanga. About 13 years ago, the blind psychic told him that he would be appointed leader of Kalmykia and elected president of the World Chess Federation (FIDE), would open a factory to clean the wool of Kalmykian sheep and, last but not least, would have an oil pipeline built through the Caucasian steppes.

The pipeline doesnt exist yet, but the psychics other predictions have all come true.

Ilyumzhinov has ruled one Russias poorest republics, a dusty strip of land bordering the Caspian Sea, home to 290,000 people, since 1993. He assumed the presidency of FIDE two years later. In 1998, he organized the Chess Olympiad in the Kalmykian capital of Elista, fulfilling yet another of Babushkas predictions -- that people would come to Elista from all over the world in that year.

This year, the focus is once again on Elista, with its population of just over 100,000. The chess world championships are underway, with Russian Vladimir Kramnik and Bulgarian Veselin Topalov battling it out for the title. Entering Thursday's 12th and final match, the two chess geniuses are tied at 5.5 points a piece -- with a pot of $1 million waiting to be split between them.

But regardless of who wins the 2006 title, President Kirsan Ilyumzhinov has dragged competitive chess into its deepest crisis ever.

The World Championship this year is a farce. It all started when Topalov, who was behind 3:1, accused his Russian adversary of cheating. It was "odd, if not suspicious," said Topalov, that in the third match, between moves 15 and 16, Kramnik went to his private bathroom three times within 13 minutes -- at 3:55 p.m., 3:57 p.m. and 4:03 p.m. In the ensuing days, objections were filed, bathrooms were closed and then reopened, Kramnik failed to appear for the fifth match, open letters were written and lawsuits announced.

While all this was going on, Ilyumzhinov was shuttling back and forth between Moscow, where he would meet with Russian President Vladimir Putin, and Elista. At one point he fired the panel of referees, which he had appointed himself, and personally took on its responsibilities. He rules FIDE "in the same authoritarian way he runs his impoverished republic," chess legend Garry Kasparov wrote in a recent editorial for the Wall Street Journal. "Serious sponsors rarely want anything to do with Mr. Ilyumzhinov and his organization."

Nevertheless, Ilyumzhinov was reconfirmed as FIDEs president in June. A quick reference to the millions of dollars of his own money already invested in the game is enough to silence all critics. He quashes opposition from within FIDE.

A gaunt man, Ilyumzhinov is partial to dictators and dictatorship. He wanted to hold the World Championship in Baghdad in 1996 and had already made arrangements with the then Iraqi dictator Saddam Hussein. In 2004, he made Libya the venue for that years championship. Indeed, Ilyumzhinov likes to refer to himself as a mixture of "Napoleon, Lenin, de Gaulle and Marx."

His likeness is displayed prominently throughout the republic -- from Elistas airport to the billboards along Kalmykias roads -- images of the president on horseback, with Putin, with the Russian Orthodox patriarch and with the Dalai Lama.

The president is himself no slouch when it comes to chess. He won the Kalmykian national chess championship in 1976 at the tender age of 14. When the Soviet Union collapsed in 1991, Kalmykian came into a great deal of money, though it remains unclear exactly where it came from. He owns a private jet and six Rolls Royces -- he has himself chauffeured around Moscow in his black limousine but prefers a white one while at home in Elista. He also sunk $50 million to construct City Chess, a settlement on the citys outskirts designed to resemble a collection of country houses, complete with a glass palace -- the venue for the Kramnik v. Topalov duel.

Ilyumzhinov is an admirer of chess phantom Bobby Fischer and compares him with Isaac Newton, Copernicus and Russian cosmonaut Yury Gagarin. Ten years ago he issued a directive, known as Ukaz 129, to promote chess in Kalmykia. Chess is now part of the curriculum in the first three years of elementary school, and 17 pupils have already placed in the world rankings, an astonishing achievement, especially compared to the Russians. 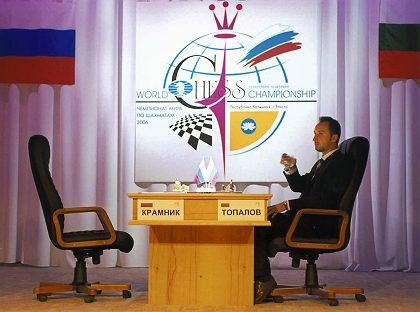 World Chess Champion Veselin Topalov waits for his opponent Kramnik to show up for game five. He never did.

For Ilyumzhinov, the current chaos at the World Championship, complete with all the talk about bathrooms and cheating, is meaningless. Indeed, his current interests lie elsewhere, with international politics, for example, and with US President George W. Bush.

"The man provides order," he says, "he conquers countries, territories and oil wells. He gives the wells to the rich oil companies, making them even richer, and thats completely okay." In fact, says Ilyumzhinov, it is quite possible that the worlds population will soon be living in a single, American state. "As long as order and discipline prevail -- whats the problem?"

And what about the extraterrestrials? "The day will come when they land on our planet and say: You have behaved poorly. Why do you wage wars? Why do you destroy each other?'" the president says. "Then they will pack us all into their spaceships and take us away from this place."

Given his psychic's success rate so far, we may want to start packing.