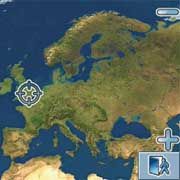 With its GPS-aligned maps, Nokia wants to put Europe and the world on your mobile phone. Almost every company in the business is jumping into the market.

He holds the world in his hand. The world rotates smoothly around its axis, then the breakneck nosedive begins: towards Europe, Germany, Berlin and finally Berlin's city center.

The first streets of houses become visible, and eventually the building in front of which he stands: a renovated factory from the Wilhelminian age on Invalidenstrasse. Pleased, Michael Halbherr glances down on the mobile phone that has just verified his exact position.

"That's only the beginning," Halbherr says. His Swiss German sing-song accent and his woollen sweater make him seem almost chummy and homely. But looks can be deceptive. The 42-year-old chats with jovial serenity about how groundbreaking his system could become -- not just for users but for the entire industry.

Halbherr is the director of the Berlin-based software company Gate5, which was acquired by Nokia -- still the world's largest producer of mobile phones, with a 30 percent market share -- last autumn. The engineer is responsible for working with his team of 70 employees to make the cartographic altitude flights, that were until now mainly the domain of Internet services like Google Earth, available to mobile phone users.

The system, recently introduced at the 3GSM wireless technology conference in Barcelona, is called Nokia Maps. It is the first time a mobile phone producer is has simultaneously gone head to head with a navigation system against providers like Tom-Tom and the search engine company Google.

The results are remarkable. Even hard-boiled Google earthlings are surprised by the computer-game-like quality of the mobile phone graphics. And many people are startled upon picking up a mobile phone and seeing it automatically determine its own location -- without having been provided the name of a single street.

Three's no electronic snitching behind this performance. It's a GPS chip that calculates its own location on the basis of the positions of 20 navigation satellites orbiting the Earth -- just as navigators in millions of cars all over the world already do every day.

A few clicks are all it takes for Halbherr to download a city guide for just a few euros. He wants to know whether there is a restaurant nearby -- and the mobile phone promptly works out the route to take him there. Then he clicks on the telephone number appearing on his display to reserve a table. And while he's at it, he also sends the position data to his colleague, who receives it on his own GPS-equipped mobile phone, which will then show him the way to the table.

"Until now, you needed a travel guide, a navigator and a mobile phone to do this," Halbherr says. "But it's much easier combining everything in a single mobile phone."

Halbherr's system turns the world into a physically explorable database and mobile phones into a kind of remote control with which to systematically zap one's way through real space.

But in Halbherr's business, the competition never sleeps. Navigation technology is considered one of the most important trends at this year's Cebit consumer electronics fair, which opens next week in Hanover. A veritable GPS fever has gripped broad sectors of the industry. The year 2007 could go down in the history of technology as that of all-encompassing GPS-ization -- even China now wants to follow in the footsteps of the United States and Europe and set up its own satellite navigation system.

It's not the first time a technological spring fashion spreads to all sorts of technological devices: First, cheap photo chips transformed notebooks, personal organizers and mobile phones into cameras. Then every conceivable device had to feature an integrated MP3 player, even watches. Now large parts of the electronics industry have set their eyes on GPS technology.

There's hardly a brand of devices out there that isn't being upgraded with a GPS chip: mobile PCs produced by Asus, iPaq mini computers by Hewlett Packard, picture cameras by Ricoh, wristwatches by Casio and Suunto. Even Sony's pocket game console, the Playstation Portable, is being sold with a navigator function -- at least in Japan.

Many companies, especially in Germany, are seeing new opportunities open up. The Yahoo search engine, for example, wants to gain a new competitive advantage vis-à-vis Google by providing users with location-specific search services. Marco Börries is the director of Yahoo's project, called Yahoo Go. He was once dubbed the "German Bill Gates" for daring to challenge Microsoft with his Star Office suite. The new positioning-based search engine was largely developed by Börries's Hamburg team of 35 people.

Navigation technology could reshuffle the deck for chip producers too. At present, many quality devices contain a chip produced by Californian company Sirf. Now German chip producer Infineon wants to cut off as large as possible a piece of the pie for itself by providing a tiny new mobile phone chip called the Hammerhead II. Barely the size of an oat flake, the new chip is said to require only 0.3 miliwatt of energy -- considerably less than the rival product, which can suck a battery dry in just a few hours. Infineon's Reiner Schönrock predicts that one out of three mobile phones could be equipped with a satellite navigation system within a few years. 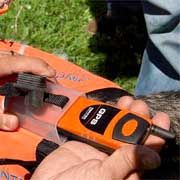 Pooch patrol: Small GPS devices can help owners quickly find stray dogs. But will these be used by jealous girlfriends on their boyfriends in the future?

But the generalized frenzy surrounding positioning technology sometimes takes a whimsical turn. Those who repeatedly find themselves having to search for their dog can equip the problem pooch with a roughly matchbox-sized satellite box made by the Swedish company Benefon. The device then communicates the dog's location to the owner's mobile phone whenever necessary. It's easy to imagine a jealous wife slipping the device into the car or her husband's coat pocket to find out whether he's really been working late hours at the office. Still the product's price promises to keep it relatively exclusive for the time being: A positioning box costs about €400 ($523).

For years, the end of physical space was evoked -- utopia seemed to lie in the vastness of cyberspace. According to some cyber-visionaries, the future belonged to telecommuters who would require neither offices nor airplanes. But the reality of globalization looks different: Never before have people moved, traveled and flown as much as they do today. Now the personal electronics industry is adapting to this mobile lifestyle by undergoing a kind of "topographical revolution."

But not everything bearing the GPS label actually contains useful navigation technology. Many producers are still disoriented in the face of the possibilities offered by the technological means available. The Blackberry 8800, for example, does dispose of a GPS chip. But those who want to use the pre-installed positioning function are likely to be disappointed: Uninspiring fragments from Blackberry Maps wobble sluggishly onto the display, the graphics are abysmal and the possibility of navigating from A to B seems never to have been heard of. It's enough to put users off GPS technology for good.

Nokia has opted for a more professional path. For the Finnish corporation, location-based services determine the marching route. The Finns have announced they will introduce three new GPS-equipped mobile phones on the market over the course of the next few months alone. Owing to Halbherr's brilliant vector graphics, Nokia appears poised to finally make positioning technology sexy and playful.

As soon as the new N95 mobile phone, which goes on sale next month, is turned on its side, the map image immediately turns into a three-dimensional, perspectival impression -- as if one were sitting on a plane that's beginning its landing approach.

This intuitive handling method is made possible by the system's complex architecture -- the Swiss engineer's area of expertise. Halbherr studied electrical engineering at Zurich's Technical University before submitting his dissertation on parallel computing at the Massachusetts Institute of Technology (MIT) in Boston. "In the old days, you would have needed a mainframe computer to calculate navigation maps," Halbherr says. "But today's smart phones have such powerful processors they can do it just as well."

Turning an industry's habits on their head

The system of payment also turns many of the industry's old paradigms on their head: Those who want to can download the maps of more than 150 countries onto their mobile phone via radio data transmission and free of charge (or they can download them onto a computer connected to the Internet at www.smart2go.com). What is more, the software isn't exclusive to Nokia mobile phones -- it also works on smart phones featuring Windows Mobile. Only those who want additional services such as navigation or voice output are asked to pay.

The unconventional business model was controversial at Nokia originally. Indeed, the proposal to develop Nokia Maps in Germany is also said to have been met with resistance from within the company headquarters in Espoo. Germany, after all, is a high-wage country with unruly trade unions -- not to mention the fact that its educational system has been in a state of crisis since the first Program for International Student Assessment (PISA) study gave German schools poor marks. To top things off, Nokia Maps was to be developed by Gate5, a software firm whose roots lie somewhere between the bohème of digital art and the computer hacking subculture.

Gate5 co-founders Andreas Steinhauser and Frank Rieger were once firmly rooted in the local hacker and art scenes. Rieger served as spokesman for the famed Chaos Computer Club for a time. They already small-timed their way through conferences and galleries for the Art+Com company with their Terravision program 10 years ago.

Terravision was a kind of gigantic three-dimensional world simulator that pre-empted much of what Google Earth later managed to stage so successfully. The digital journey around the world was controlled by visitors applying pressure to a big discoidal mouse.

Swiss electrical engineer Halbherr's task now consists of grounding the high-flying Terravision developed by Berlin's hacker bohème, shrinking it to mobile phone format and distributing it to millions of pockets the world over.

It's an expedition into the unknown, undertaken on a terrain where many have lost their way before. Recent pioneers have tried again and again to transplant GPS technology from the car to the mobile phone -- unsuccessfully until now. Siemens, for example, offered a GPS-equipped mobile phone as far back as 2005 -- it flopped. Finnish company Benefon already presented a similar device as early as 1999.

The success of GPS-equipped mobile phones was stalled, until now, by a simple obstacle: The GPS systems used in cars are only partly suited for use by pedestrians. That's still true of the system used by Nokia, as a simple test demonstrates: Standing on Invalidenstrasse in Berlin, Halbherr requests the route to the nearby Brandenburg Gate. Nokia Maps calls on him to suffer two kilometers (1.2 miles) through drizzle -- as if he were a car. What the navigator won't tell him is that it might be simpler to just take the subway train for three stops.

"Ground truthing" is the technical term for this comparison between abstract data and reality. But Nokia isn't responsible for what's true on the ground. That's the job of the two map producers, Atlas and Navteq. Their employees now actually have to cover an immense number of routes on foot, instead of driving them as they used to.

Walking through the rain or taking the subway: It's on those kinds of subtle differences that the success of mobile search engines will likely depend. It will depend, in other words, on people voting with their feet.

"Mobile positioning could have enormous effects on everyday life; it's comparable to the watershed moment that took place in the 16th century," says Christoph Schlieder, a computer science professor in Bamberg, Germany. "It was then that pocket watches replaced turret clocks. This form of mobile time-measurement turned the entire world of work inside out."

So just where will the pocket-size navigators lead us? "That," says Halbherr disarmingly, "is something I'm curious to find out about, too."