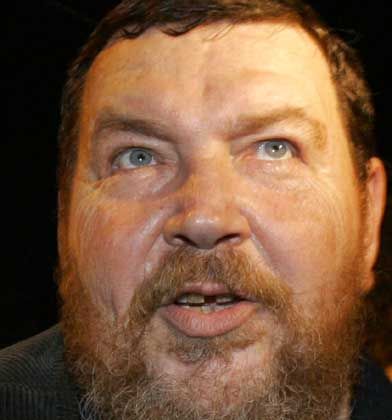 This man is everything one shouldn't be in Rome. He is fat, loyal to Italian Prime Minister Silvio Berlusconi and he perspires heavily. He supported the Iraq war and he isn't ashamed of his sparse reddish beard. Despite his outward appearance, Giuliano Ferrara cuts a sharp figure when it comes to thought. And despite his 150 kilograms (331 pounds), Ferrara is one of the most nimble of Italy's intellectuals. He enjoys the reputation of being well-versed on just about any topic -- to the point being able to run intellectual circles around most conversation partners.

"Food!" roars Ferrara in his baritone voice, as he walks heavily into Checco er Carrettiere, a legendary trattoria in Trastevere. When he walks, Ferrara stretches his head forward and extends his arms a little to keep his balance. His boat shoes look as though they've had a run in with a steel press.

He has the Soviet Union to thank for his weight. The parents of the now 53-year-old Ferrara were members of Italy's communist aristocracy. His mother was the secretary of Italian Communist Party leader Palmiro Togliatti, while his father was the Moscow correspondent for party newspaper L'Unità in the 1950s. Every morning Ferrara would eat Cornetti at home and stuffed blinis in school. For lunch, there was borscht at school followed by pasta at home.

After that Ferrara gained weight -- and power -- until they began calling him "Elefantino." He is still Elefantino, but everything else has changed.

"The liberal, secularized society is in danger of forfeiting its supreme value, namely the protection of life," Ferrara begins lecturing practically the minute he sits down. He plunges his fork into the San Daniele ham on the table. "It gives me an upset stomach," he says, chewing the ham, "to think that progress is supposed to mean being for the abortion pill, for embryonic research and for termination of pregnancy -- but also for artificial insemination. This wine, by the way, comes from Latium. It's a Colle Piccione."

Ferrara, this conservative old warhorse, was once a communist party secretary in auto manufacturing center Turin, the heart of Italy's labor movement. He parted ways with the party in 1982. "There came a time," he says, "when I could no longer say 'we' at party conventions without really meaning 'me.'"

He traded in his party membership for a German course at the Goethe Institute, and eventually packed his German Shepherd into his Renault 4 and headed north to Berlin, where he planned to study the early writings of Leo Strauss in the original German. "When I saw the piles of dog shit on Berlin's sidewalks," Ferrara says, "I knew it would be a great place to live. Have some more of the ham!"

Leo Strauss, the Jewish skeptic and mentor of the American neo-conservatives, is a constant reference point for Ferrara -- next to another German, one who has been living in the Apostolic Palace at the Vatican since April. "I am a papist atheist," says Ferrara.

His newspaper Il Foglio ("The Page") always carries extensive commentary on every dogmatic signal coming from the German pope. Most of these op ed pieces are signed, simply, "Elefantino" -- in red ink.

Nowadays, Ferrara is convinced that no one can understand politics without an understanding of religion. "Jürgen Habermas is right when he says that the liberal, secular society cannot justify its values -- actually, I'd rather say its purpose -- from within. As a result, we must seek a dialogue with the cultural power that has been manufacturing purpose for the past 2000 years: the church."

Within the general relativism of values, he says, wiping his mouth, religion is no longer a private matter. When he says "Act as if God existed and grant Him full participation in public life," Ferrara is completely in agreement with Pope Benedict XVI.

The next dish is Gnocchi alla Romana. His napkin is showing its first stains. Sometimes Ferrara groans and breathes heavily. But only when he is searching for just the right thing to say. He wears his size and dimensions with ease.

Back in the 1980s, Ferrara began feeding the CIA political analyses on a regular basis. "The pay was good, but what I liked about it was the amoral aspect. Besides, it was good for my narcissism."

In 1994, "Elefantino" became a cabinet minister and press secretary in the first Berlusconi administration. He was often heard complaining about his boss's vanity which, for the Machiavellian Ferrara, is the only unpardonable sin of the prince. 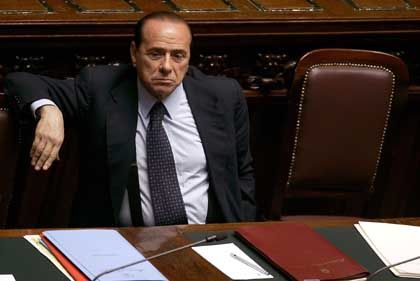 Italian Prime Minister Silvio Berlusconi's popularity is waning, but he still has some big backers.

"But that's just the way he is. Silvio (Berlusconi) has the megalomania of a Kim Il Sung. But," he says, tucking his napkin back into his shirt, "it's softened by a high degree of self-irony. What are you having? The veal loin is excellent, very juicy with lots of oil. I'll have an Involtino, just one roll, thank you."

Would he vote for Berlusconi again? "Of course. If only because he's my friend. I like politicians who don't talk the same way they all do. Salute!"

Ferrara never joined Berlusconi's party. "I never wanted to be part of his senior staff. I'm not cut out to be a career politician." Some call him Berlusconi's brain, while others prefer to liken Ferrara to Pinocchio's talking cricket. A heretic, a court jester -- a court heretic who knows exactly how far he can go, and who has never forgotten that everyone at court has to play the political prostitute on occasion.

Nowadays, as editor of Il Foglio, he still has the ear of his former boss. More than ever, in fact.

Surrounded by stacks of journals

Il Foglio is a journal of journalistic luxury and intellectual trends -- a stimulating mix of indignant ranting, hyper-intellectualism and the unpredictability of the Osservatore Romano, which is just as likely to run a two-page story on the soccer genius of striker Roberto Mancini as on the "Dominus Jesus" declaration of the Congregation for the Doctrine of the Faith. Ferrara's paper devotes one page to prison stories and features the country's best crime section.

Its writers include free thinkers and independent minds like Adriano Sofri, co-founder and head of the Marxist Lotta Continua. The Catholic leftist Otto Kallscheuer -- also a regular contributor to Il Foglio -- has called the daily "the right-wing newspaper of the disillusioned Left."

"We didn't follow any of the rules back then," says Ferrara, as he recalls the founding of Il Foglio in 1996. "No photography, no cheap paper, analysis instead of news and only one printed page."

Nowadays, Il Foglio has the financial backing of a few businesspeople from Milan and Sardinia, most of them friends of Berlusconi. Veronica Lario, the unconventional wife of the prime minister, owns a large stake in the paper. And thanks to government subsidies, says Ferrara, the paper, with a circulation of 14,000, can now support itself. 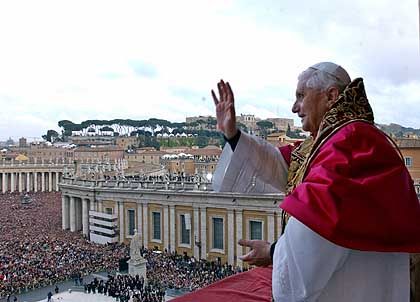 From his study around the corner, Ferrara enjoys a view of the Tiber River amid stacks of books, heaps of newspapers in three languages, The New Republic and book manuscripts.

Ferrara is a Falstaff, amoral and constantly hungry for new ideas, gorging and intoxicating himself with clear thought. He devours vast quantities of international newspapers on a daily basis, dines on lead stories in publications ranging from The Spectator through the Los Angeles Times to the National Review, and is so hungry for fresh thought that his intellectual meals occasionally include a serving of half-baked ideas, such as the debates over Darwinism and "intelligent design" in the American Bible Belt.

His paper devoted page after page to pumping intellectual ammunition into the recent campaign against artificial insemination and embryonic research. Ferrara, married to an Italian-American feminist, has no children of his own. He says: "I am opposed to abortion, but I am in favor of the abortion law. Women should never again be forced to resort to back-alley abortions."

The mood of Berlusconi

Every weekday evening, Ferrara and the guests on his talk show "Otto e Mezzo" ("Eight-thirty") butt heads over topics as diverse as (German Chancellor) Angela Merkel, gay marriage or the debate over the Iraqi constitution. The program, which offers an hour of concentrated debate on independent channel La 7, even makes do without scantily clad audience pleasers -- and still manages to garner a respectable 1 million Italian viewers.

Nevertheless, Ferrara insists that he is not a powerful man. "In Italy," he says, "the brother-in-law of a police chief has power. I have no foundations, no government titles and I don't own a company." But one thing he does have is influence. According to its left-leaning counterpart Il Riformista, Il Foglio is something of a must-have accessory for the Italian intellectual.

The drama of politics and leadership may have impressed Ferrara at first. But those days are past, he says, "Berlusconi is only a visionary when it comes to business. In politics, he navigates without instrumentation, taking one day at a time."

Ferrara presents his laundry list of complaints. The government has not modernized Italy as promised. The country is in debt, the economy is less competitive than before, and the country's inherited ailments -- its judiciary, the Mafia, Mezzogiorno -- are everything but healed. But then why should anyone vote for Berlusconi again next April?

"Berlusconi reflected a mood in Italian history," says Ferrara. In his view, true statesmen became a dying breed when Italy's old system collapsed. "Another coffee? Italy is a country that can afford a mood like Berlusconi -- and a mood like Il Foglio."

Ferrara has eaten his fill and is in good spirits. "Perhaps I do like it here after all. I like this cynicism, this sense that nothing is really important. This randomness that leaves so much room for caprice. We are not a country of limits and bunkers."

Gargantua has eaten and has expressed his thoughts. The symposium has come to an end: "Andiamo."

He hurries out into the city of noise, of caprices and manhole covers stamped with the original mark of the political: "SPQR" -- "Senate and People of Rome." Behind him, he leaves a blood-red speckled napkin. But that's just the remains of his Gnocchi alla Romana.