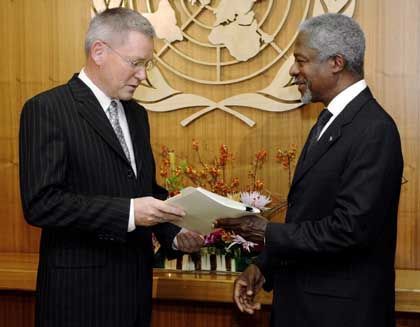 UN investigator Detlev Mehlis handing his report on the assassination of Rafik Hariri to Kofi Annan.

Detlev Mehlis sits in a cream-colored armchair on the 34th floor of the United Nations headquarters in New York; his schedule is spread out on the table; a telephone is ringing incessantly. Every half hour another UN ambassador stops by to pay his respects. Deep furrows have worked their way into his face, his voice sounds flat, his eyes look tired and his trademark roguish smile is barely discernible.

Mehlis, the man sent by the UN to investigate the car-bomb murder of former Lebanese Prime Minister Rafik Hariri on Feb. 14, has just presented his report to the Security Council. As the first special investigator in the history of the United Nations, Mehlis, 56, sat at the far left end of the horseshoe-shaped conference table and, for the second time since beginning his investigation, presented the fruits of his labors.

It's an investigation with major political implications for the Middle East. The US government is especially interested in evidence proving that Syria, the decimated hegemonic power in Lebanon, was behind both the planning and execution of the attack. It would provide Washington the justification it needs to impose sanctions the Bush administration believes are long overdue, and not just because of the Syrians' alleged involvement in the Hariri murder. The Bush administration is convinced that terrorists are pouring unhindered into Iraq through the country's border with Syria.

But that's not all. The United States is convinced that Syria, under current president Bashar Assad, is weakened. And they want to keep the pressure on -- Syria, after all, continues to support terrorist organizations like Hezbollah.

During the course of his investigation Mehlis, a Berlin public prosecutor specifically recruited for the UN mission, interviewed 500 witnesses and compiled a Hariri file encompassing 37,000 pages. And Mehlis believes he is close to the truth -- nevertheless, he was unable to find enough solid evidence to ensure that his case would hold up in court. His meticulous investigation, though, has elevated him to hero status in Lebanon, but now Mehlis wants to go home, back to his office on the top floor of Court of Appeals in Berlin-Schöneberg, back to what he calls "the job that I like." The constant fear of falling victim to an attack in Beirut has taken its toll on Mehlis. Despite the Syrian withdrawal from Lebanon, Syrian intelligence services continue to maintain a network of agents in the country -- and in Damascus, Mehlis is seen as an acute threat.

Many have tried to convince him not to go. The American ambassador to the UN, John Bolton, used flattery to get Mehlis to stay, calling his work "extraordinary." UN Secretary General Kofi Annan made a personal appeal. But the German remained steadfast. And now, the United Nations has a problem -- it has no replacement and no clear idea as to when the investigation could finally be completed.

Mehlis says it could take another one or two years -- that is, unless Syria begins to cooperate more fully. But that isn't likely to happen. Although a UN Security Council resolution called upon the Assad regime to cooperate with the UN investigators "immediately and completely," the Syrians have continued to stonewall the investigation, Mehlis told the Security Council. The Syrian ambassador demurred, insisting that "we cooperated completely," prompting an incredulous stare from Mehlis.

Serge Brammertz, Deputy Prosecutor for Investigations at the International Criminal Court in The Hague, has been mentioned as a possible Mehlis successor. But he would be facing a job even more difficult than that of clearing up the Hariri murder. In the wake of the murder of prominent journalist Gibran Tueni last Monday in Beirut, the Security Council decided to widen the special investigator's mandate even further. The next special investigator will be charged with helping the Lebanese investigate all political murders in the last 14 months.

Gibran Tueni was the publisher of al-Nahar, widely respected for its role as one of the Arab world's most liberal newspapers, and was also a member of the Lebanese parliament. As an advocate of the Lebanese independence movement, he was highly critical of Syrian control over Lebanon. His star author Samir Kassir, an equally uncompromising critic of the Assad regime, was killed in a bombing attack in June. A few weeks later, popular television host Mai Shidiak survived an attempt on her life but lost an arm and a leg. "What are we waiting for?" asked Tueni in a eulogy at Shidiak's funeral, "until we are killed, one after the other?" 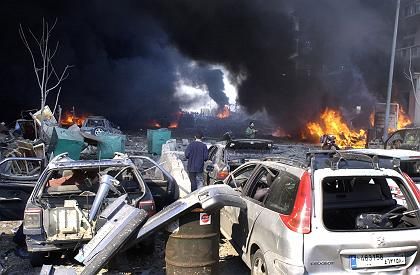 The 48-year-old Tueni was himself the target of many a murder threat. He moved to Paris for safety, but returned to Beirut two weeks ago under police protection. He died one day after returning to Lebanon, only 500 meters from Mehlis's office. The attackers had attached a 100-kilogram bomb to his parked car. The explosive they used had only been on the market for two months -- and it's one that only a very few intelligence agencies have in their arsenals. The Lebanese authorities promptly flew in four European explosives experts to assist in the investigation.

Mehlis knew and was fond of Tueni, and had also questioned him as a witness. When he received word of the murder in New York, it became a symbol of his own impossible mission.

While in Beirut, Mehlis performed the function of an outside auditor of Lebanon Inc., of someone who examines the company's books and exposes the offences of its executives -- a role in which he felt increasingly uncomfortable. He repeatedly complained that every step his team took was politicized -- sometimes by pro-Syrian politicians, sometimes by the Hariri camp -- at times prompting Mehlis to wonder whether his investigation was doing the country more harm than good.

The report he presented to the Security Council paints a picture of Middle Eastern political customs -- of political elites who have no qualms about committing political murder should it further their ends. But despite his extensive investigation and report, after seven months the Berlin prosecutor is still unable to answer the decisive question: Did orders for the Hariri murder came from the very top in Damascus?

The more time Mehlis spent piecing together the puzzle surrounding the affair, the more he realized that he was dealing with a thick and impenetrable web between the regime in Syria and its lackeys in Lebanon. He also learned just how difficult it is in this environment to glean information that could hold up before an international court. 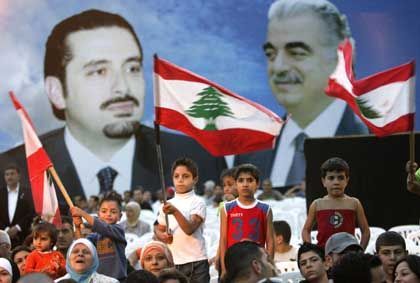 During the course of his investigation, Mehlis uncovered a system in which Syrians and Lebanese had formed an alliance with one overriding objective in mind: to guarantee and solidify their own influence. When Hariri, a wealthy construction magnate and former prime minister, began to question this system, he was first seen as a troublemaker and ultimately as a problem.

As a result of the transcripts, Ghazale knew that Hariri, despite having been warned by the Syrians, was unwilling to relent. When Hariri began publicly criticizing Lebanese officials for being Syrian lackeys, Ghazale called Hariri, on August 3, 2004, and threatened him directly. Ghazale apparently told Hariri that the Syrians were displeased about Hariri's comments in the press, especially after Hariri and Assad had come to terms. Did Hariri plan to comply with the agreement known as the "Damascus protocol?" he asked. Hariri, intimidated by the Syrian's threatening tone, said: "Naturally."

The Lebanese intelligence agencies have compiled 26,000 pages of interrogation reports. The UN investigators analyzed the reports covering a period between December 2004 and March 2005, the months seen as decisive in determining Hariri's fate. They also opened a safe in the private residence of Ali al-Hajj -- one of the key suspects arrested in the case and a former head of the Internal Security Forces -- in which the general had stored several hard disks containing intelligence agency information. Mehlis also discovered a secret slush fund held by the influential Lebanese security agency Sûreté Générale, which was used to finance secret operations and was controlled by the director, one of the main suspects in the Hariri case. Mehlis's team is now looking into whether the fund was used to finance the Hariri attack.

The German prosecutor is convinced that this network of Lebanese and Syrian officials is responsible for the murder. But to this day, he and his staff have failed to prove who the spider in the web was and who issued the orders to kill Hariri, nor have been they been able to identify the killers themselves. In the past few weeks, the special investigator has also been forced to look on as the Syrians use their state-owned television in an effort to discredit him.

One of the men interviewed on Syrian television was one of Mehlis's witnesses, the man to whom accusations against President Assad's brother, Mahir Assad, and his brother-in-law, Assif Shaukat, the head of Syrian military intelligence, are attributed. In a confidential version of his first report in October, Mehlis wrote that both men could have prepared the attack during several conspiratorial meetings in Damascus. 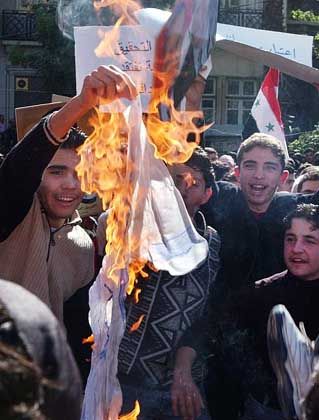 Syrians burning an Israeli flag in a demonstration against Mehlis's first report, which implicated leading Syrian officials in the murder of Rafik Hariri.

The witness, a Syrian named Hussam Tahir Hussam, announced on live television that he was pressured by the UN commission and lured by a $1.3 million payment stemming from associates of the Hariri family. The public recantation was a blow to the UN special investigator, who has called it part of a "disinformation campaign" and "manipulation by Syrian officials." Mehlis's assertion is also supported by a statement the witness made to the Lebanese chief public prosecutor shortly before his appearance on Syrian television. The Syrians, he said, had placed his father under arrest.

Another of Mehlis's chief witnesses, the defector Suheir al-Sadik, also proved less than helpful to the investigation. His statements led Mehlis to several Syrian generals. Sadik claimed that he had attended a number of preparatory meetings in his Beirut apartment, and later stated that he had chauffeured some of the conspirators on the day of the Hariri killing.

Verification of Sadik's claims would have moved the investigation forward. But a DNA sample that the UN team obtained from the supposed co-conspirator proved to be useless when they were unable to find matching DNA at the conspirators' alleged headquarters or at the scene of the crime.

Meanwhile, the Syrians are derisively claiming that Sadik's testimony was bought. Like Hussam, Sadik also says that he was given large sums of money.

And some potentially important witnesses have been kept away from Mehlis completely. Shaukat, part of the Damascus old guard and one of the 19 defendants, was not one of the five Syrians the Mehlis was permitted to question in Vienna in early December. Now the commission is hoping to be able to interrogate Shaukat after all.

Mehlis is hated in Damascus. The Syrian media vituperate against him as the "son of a Jew," as a drinker and as a corrupt henchman of the Lebanese. For security reasons, the curtains in Mehlis's office in Beirut's Monteverdi Hotel remained drawn day and night. An entire army of bodyguards accompanied him whenever he ventured into the city. Mehlis himself characterized his life as a special investigator as "semi-luxurious solitary confinement."

Mehlis, ostracized in Damascus and a hero in Beirut, is mainly a security problem back home Berlin. In anticipation of his return, the police have assembled a special task force that will protect him around the clock. Berlin's venerable Court of Appeal on Elssholzstraße -- where Mehlis has his office -- will likely be forced to undergo a security makeover.

But Mehlis hasn't yet made his escape. UN Secretary General Annan has convinced him to stay on a few more weeks, at least as an advisor, until a successor can be found. Although Mehlis will likely be traveling back and forth between Berlin and Beirut a while longer, his Beirut episode will finally end in late January.