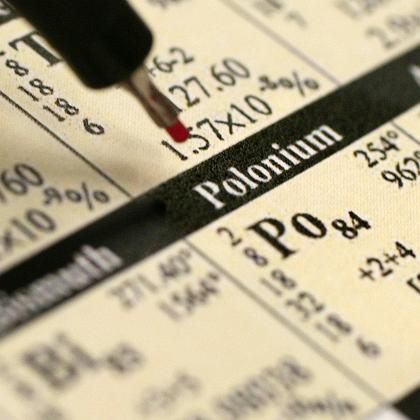 Polonium was discovered in 1898 by Marie Curie.

Polonium is an extremely dangerous element that is mainly produced in Russian nuclear reactors. For a murderer, it is also an ideal poison. The radioactive metal sends out such strong alpha-rays that in the dark it glows a faint blue. But the deadly rays don't travel much more than five centimeters.

You can even hold polonium in your hand, since it is unable to penetrate skin. In fact, its destructive powers are only fully unleashed when the substance is swallowed -- even a miniscule amount can be fatal. In Alexander Litvinenkos case a milligram would have been sufficient.

Experts agree, though, that even such a small amount would have been very difficult to procure. "To produce the amounts required you would need too use a nuclear reactor," British toxicologist Nick Priest of the University of Middlesex told the BBC.

Extremely low levels of polonium are actually naturally present in the atmosphere and the ground. The shiny silvery metal is created in several stages as uranium decays, and it also decays extremely rapidly. As a result, a ton of uranium ore contains only one ten thousandth of a gram of the deadly substance.

Patient assassins with plenty of time could use a chemical process to produce polonium from uranium. "There is even a book that explains how it can be done," notes Herwig Paretzke of the GSF National Research Center for Environment and Health in Neuherberg near Munich.

But this method only creates insignificant quantities of the element. Nuclear reactors, on the other hand, can be used to artificially generate larger amounts of the highly valuable substance. Russia exports about eight grams per month to the US, its sole buyer, with a single gram selling for about $2 million.

Polonium was discovered by Marie Curie in 1898. She won the Nobel Prize for her efforts and named the element after her home country, Poland.

Scientists have found a wide range of applications for the element since that time. It was used in the detonators of the first atomic bombs, where its rays acted to trigger atomic reactions. In the 1940s it was used in automobile spark plugs in order to strengthen the ignition spark. Later it was used in the production of plastic films and other artificial fibers. Surrounded by gold film, polonium acted to reduce the effect of harmful electrostatic charges during the production process.

Today, polonium is hardly used in manufacturing or other industries anymore. It decays too quickly, and more effective substitutes have been discovered. However, researchers still use it as a source of alpha rays. It is not known to what extent defense industry researchers continue to toy with the idea of using polonium for military purposes. Modern bombs no longer contain polonium, but all the atomic powers likely continue to maintain old separation facilities.

The International Atomic Energy Agency (IAEA) monitors the sale of the element. The agency has registered numerous cases of illegal trade in radioactive substances, but there are no confirmed reports of stolen polonium. Still, that means little in this case, since the poison could easily be stored in a small bottle or capsule and smuggled across several borders. In any case, experts say it would be all but impossible to manufacture the necessary amount of polonium in a simple basement laboratory. The amount that was used in the attack almost certainly came from a nuclear reactor or a particle accelerator. In order to create a larger quantity of polonium in an accelerator, the element bismuth is bombarded with particles.

A variety of the element, called polonium 210, was used in the murder. It decays rapidly, having a half-life of just 138 days, indicating that whoever acquired the polonium for the murder must have had access to a relatively fresh supply. Paretzke estimates that the polonium used to kill Litvinenko was less than one year old.

There is little risk that any bystanders were irradiated in this case. In fact, standing near smokers is riskier. Tiny airborne particles of the radioactive metal commonly settle on tobacco leaves. This explains why cigarettes can contain significant quantities of polonium. Heavy smokers are exposed to an annual dose of radiation from polonium equal to about 250 lung x-rays.