When Wilfried Rosendahl, an archeologist from Mannheim, embarked on a secret mission to the somewhat isolated town of Idar-Oberstein, he felt uncomfortable. "Apparently some people vacation there voluntarily," he says with a noticeable shudder.

Rosendahl went to the workshop of lapidary Michael Peuster to view the results of a special order. Peuster had cut and polished a 14-kilogram (31-lb.) block of crystal to make a life-sized replica of a human skull.

The project took Peuster over a year to finish. This Sunday the skull goes on display at the Reiss-Engelhorn Museum in Mannheim, mysteriously lit and displayed in a glass case. Rosendahl will ceremoniously pull a black cloth from the case to open the "Skull Cult" exhibit, and he's looking forward to the astonished looks on the faces of museum visitors.

He won't hide the fact that the transparent skull is not an archeological artifact. On the contrary, says Rosendahl, "this is the first time that the manufacture of this type of skull has been documented from the very beginning."

There are plenty of crystal skulls, and the legends that surround them are fueled by their mysterious origins. To this day, doomsday believers and fans of esotericism assume the transparent heads are indeed products of Mayan or Aztec culture.

Until recently, many scholars held the same erroneous belief. Respected institutions, like the Smithsonian National Museum of Natural History in Washington and the Musée du Quai Branly in Paris, purchased the skulls from dubious dealers and displayed them in their collections. Only in recent years have the specimens quietly disappeared into museum storerooms.

Fanatical believers, however, remain unshaken in their faith that the skulls actually contain extraterrestrial information. Many fear the world will end on Dec. 21, 2012, at the end of the old Mayan calendar -- and that the apocalpyse can be prevented only if all 13 crystal skulls supposedly in existence are displayed in a specific form on that day.

Eccentrics and collectors paid large sums for the relics, and promptly locked them away in safes. SS leader Heinrich Himmler reportedly owned a particularly opulent specimen, which weighed 9.2 kilograms and was 17.5 centimeters (seven inches) tall.

By comparison, Rosendahl's museum specimen weighs a modest four kilograms. The fact that he had it made in Idar-Oberstein is a tribute to the great craftsmen who have been working in obscurity there for centuries. Most archeologists now believe that all of the earlier crystal skulls were made in the gloomy Hunsrück Mountains, near the French border -- not in the sunny realm of the Mayans.

With tools made of stone and wood, copper and tin, pre-Columbian artists in Central America would hardly have managed to create such detailed sculptures out of crystal chunks. Studies a few years ago with a scanning microscope showed, in fact, that the skulls exhibit traces of a processing method which lapidaries have used only for the last 150 years.

Rosendahl finds it surprising that the skulls became so popular only in the late 19th century. Even then there was no evidence at all that they were authentic artifacts from Mexico.

The skulls were brought into circulation by shrewd figures like the Paris antique dealer Eugène Boban. Sinister characters like Boban profited handsomely from the story -- at a time when Western museums were furiously buying up treasures and artwork from the advanced civilization of the Mayans, which had recently become the focus of attention. "But they had very little knowledge about real artifacts," says Rosendahl.

It was a rich seam for crooks and frauds. The British writer Frederick Albert Mitchell-Hedges claimed he had personally excavated a skull in the Mayan city of Lubantuun in Belize in the 1920s. Mitchell-Hedges was a writer of shady heroic epics, but with this cock-and-bull story he solidified his reputation as an adventurer. He advertised his alleged find as the "Skull of Damnation."

Crystal from Brazil and Madagascar

The fictional film character Indiana Jones would later memorialize Mitchell-Hedges on the silver screen. In the fourth part of the film franchise, the whip-swinging archeology professor searches for a crystal skull in Peru.

Peuster, the lapidary, and his godfather Manfred Wild reconstructed the true story of these artifacts. In the past, a number of engravers and polishers from Idar-Oberstein received their training in the two centers of the rock-crystal industry, Milan and Paris. When they returned, they brought additional training to the technicians who had learned their trade in the German hinterlands. Around the end of the 19th century, the Hunsrück region had a reputation among insiders as an El Dorado for the crystal-cutting trade.

Documents confirm that crystal nodules from Brazil and Madagascar were being cut in Idar-Oberstein at the time in question. "And geochemical analyses show that the raw material for the legendary crystal skulls probably did in fact come from these two areas," says Rosendahl.

The isolated town must have attracted traders with fraudulent intentions. "The people here have always been a secretive bunch," says Wild. "When someone showed up and ordered a crystal skull, our ancestors made it -- and it was good."

Even today the success of the local lapidaries stems from this tradition of secrecy. Inexpensive products are displayed in shop cases for tourists. "The really good pieces are traded behind closed doors," says Wild.

He and his fellow lapidaries work anonymously for jewelers like Cartier. Wild understands why he's remained anonymous as an artist: "I can't tell these sorts of clients that their jewelry was made in a backwater in the Hunsrück Mountains."

Kingdom of the Crystal Ship's Clock

His godson recently sculpted a life-sized statue for Bhumibol Adulyadej, the elderly Thai king. Bhumidol -- normally a reserved monarch -- was so delighted that he invited Peuster to a private audience.

Wild himself recently provided another gift for Bhumibol's 60th anniversary celebration. A jeweler working for the Emir of Qatar, who was attending the party, hectically contacted Wild with a very specific request: "'It has to have something to do with a saxophone or a sailboat, and it has to be here tomorrow,'" Wild recounted.

He realized he had something to fit the client's bill. "I thought, 'Wait -- I have a big ship's clock, fully functioning, made entirely from quartz, with four kilos of gold and 2,000 garlands. That's it!" he says.

On another occasion, Wild built crystal combat helicopters that simulate engine noise -- a gift of gratitude from the US helicopter maker Sikorsky for a large order by the Kuwaiti government.

The veteran craftsman has a clean conscience about filling orders from customers who may not be the most upstanding democratic leaders. "With this money, at least they can't buy weapons," he says.

Rosendahl, the archaeologist, says he isn't an unconditional admirer of Idar-Oberstein crystals. But he believes the skull was a success. "It's delicate, without a pronounced forehead," he says. "If it were a real skull, it would certainly be from an attractive woman." 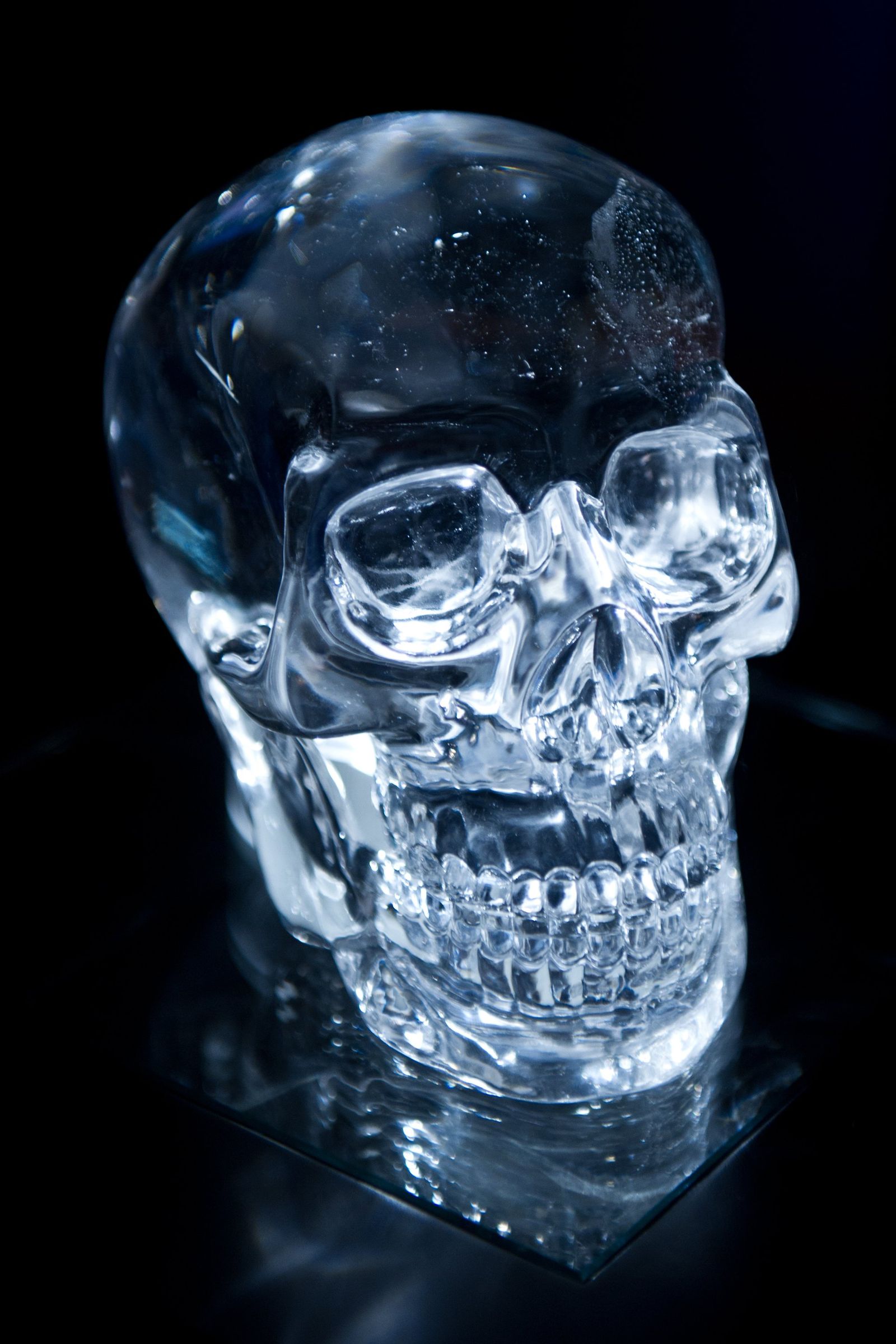 A modern crystal skull goes on display in Mannheim to highlight a secretive tradition of German stonecutting.