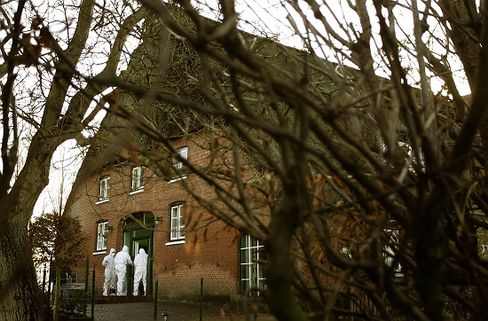 Experts of the Federal Criminal Police Office in Germany inspect a home in Hamburg where radiation was detected.

Most Russians associate a municipal authority with a long wait. That made it even more surprising to Dmitry Kovtun, 41, when, after arriving on Monday, October 30, at the city hall in Hamburg's Altona neighborhood -- a classic structure with a view of the Elbe -- he only had to spend a few minutes submitting his application for a permanent residency permit. He signed a form, and that was it.

But his signature was not the only thing Kovtun left on the form. He also left a passport photo -- one that investigators have confirmed was contaminated with the deadly radioactive rays of Polonium 210.

The contaminated photo from Altona is now playing a central role in the British investigation into the mysterious death of former KGB agent Alexander Litvinenko. They believe the Kremlin critic was poisoned with Polonium on Nov. 1 in the bar of London's Millennium Hotel. And because Kovtun's application with photo was officially dated, they now know that the Russian from Hamburg already bore traces of radiation two days earlier.

On November 1, Kovtun flew from Hamburg to London, to meet in the Millennium Hotel with Litvinenko and a second ex-KGB colleague, Andrei Lugovoy. Investigators are now probing the question of whether it was Kovtun, who is maintaining his innocence in the case, who brought the poison to London. Regardless, state prosecutors from Hamburg now are investigating him on suspicion of handling illegal radioactive substances.

The attention of investigators to Hamburg was first drawn by a SPIEGEL report two weeks ago that Kovtun had flown to London via Hamburg. Officials then found their way to the home where Kovtun is registered -- Erzbergerstrasse 4 in Hamburg's Ottensen neighborhood.

When experts from the German Federal Office for Radiation Protection confirmed radioactivity at the site on Dec. 8, it unleashed a frenzy of activity for the city-state's Interior Ministry. Hamburg police informed the Federal Office of Criminal Investigation (BKA) and set up a special investigatory commission. They reconstructed Kovtun's path -- and in doing so discovered radioactive traces crisscrossing the city and beyond.

Kovtun knows the area along the Elbe River like the back of his hand. In 1992, the former Soviet Army officer applied for political asylum in Hamburg, where at the end of 1994 he met Marina, also of Russian background. They married in 1996.

But Kovtun is not the domestic type. When he has money, he spends it with both hands and the marriage didn't last long. Now Marina lives with her new husband and their two children in Erzbergerstrasse 4.

Even today, Kovtun remains a close friend of his former wife and her family, which owns the house. When he flew into Hamburg on Oct. 28 on an Aeroflot Tupolev jet from Moscow, his ex-wife Marina picked him up at the airport in her BMW station wagon.

They talked and drank together in Erzbergerstrasse well into the evening. Marina and her partner offered Kovtun their sofa for the night. In the apartment and in the BMW, investigators later found traces of radiation. But unlike the photo, it's not possible to track the exact date when the other traces were left and one cannot rule out the possibility that they came from other visits.

On Sunday, October 29, Kovtun called his former mother-in-law Eleonora W., a respected psychiatrist. "Dmitry always called me when he was in Hamburg," she says. "Otherwise I would have been mad at him." She lives on an elaborately restored former farm in Haselau, about 30 kilometres west of Hamburg. She picked him up in her Chrysler 300C. "We sat all evening in the kitchen, drinking and talking," says W. 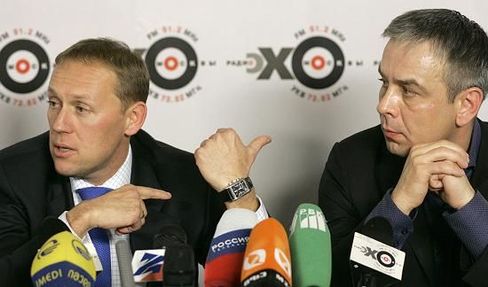 The next morning, the psychiatrist took her ex-son-in-law to Hamburg. In her car, and in her home, there are also traces of radiation -- but they, too, are not datable. Kovtun was relieved that everything went so quickly at the public office, says Eleonora W. He called Marina, whose partner used his own credit card to book a Nov. 1 flight on Germanwings to London for Kovtun.

Later that day, Kovtun met Litvinenko and Lugovoy in the Pine Bar at the Millennium Hotel in London. According to Lugovoy, they met to discuss a cooperation deal between his Moscow security firm and the British security company Erinys and Risc Management. Later, traces of radioactivity would be found everywhere -- in the Millennium Hotel and at Erinys security company. The fact that no radiation has been traced in the bus that took Litvinenko to the hotel has led investigators to believe that he was poisoned inside the Millennium.

A nuclear smuggler or more?

In Hamburg, police consider Kovton to be a nuclear smuggling suspect. "The traces make it hard for us to rule out that he had Polonium 210 on him," says Thomas Menzel, who is heading the investigation.

But Kovtun claims he had visited the London security company Erinys much earlier -- on Oct. 16. But again, unlike the radioactive traces found on the Hamburg photo, the traces found at Erinys could not be dated. Kovtun's Hamburg attorney, Stefan Knief, says his client was probably already contaminated when he flew from London to Moscow, and thus from there via Hamburg back to London. There is no way he knowingly transported Polonium.

This theory of an earlier poisoning is Kovtun's last hope. If it cannot be confirmed, he will likely be indicted.

But investigators still don't know what kind of crime they are dealing with: Was renegade agent Litvinenko to be liquidated? Was his death the result of an accident during the illegal sale of the material? Or was it the work of dark forces who wished to discredit Russian President Vladimir Putin?