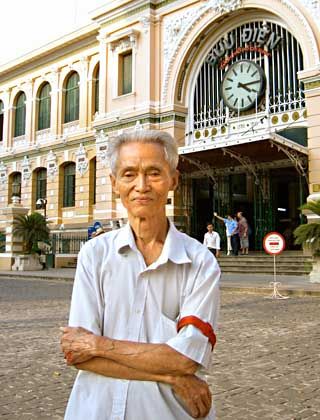 The main post office in Ho Chi Minh City is close to the Saigon River in the quieter part of town, where skyscrapers don't yet jut into the clouds and where no mopeds buzz over the streets like swarms of hornets.

It lies across from Notre Dame cathredral and is housed in an old colonial building from 1886. It looks like the old market halls of Paris, painted apricot, with electrical fans humming between ornamental pillars and spots of sunlight falling through a window in the roof. It's a timeless place -- the most beautiful post office in all of Asia.

Duong Van Ngo, a wiry 77-year-old man, parks his bicycle in the shadow of the sycamore trees, whose trunks are painted white as if they were wearing gaiters. He greets the post card vendors and shuffles through the archway with the station clock. It's eight o'clock on a muggy February morning, the start of his workday.

Ngo sits down at the end of a long wooden table underneath a mural of Ho Chi Minh. He produces two dictionaries and a directory of French postal codes from his briefcase. Then he slips a red armband over his left sleeve to make sure he's recognized immediately. He sets up his sign: "Information and Writing Assistance."

The first person to come to his stand is a man from the Mekong Delta. He's got a letter with him, addressed to a businessman from Europe. He's his chauffeur, and he's been driving him to business meals and meetings for a year. He asks in writing if the man can get him health insurance and asks for a $200 advance. Ngo translates the letter into English. "Dear Sir," he writes with his fountain pen, "might I politely request, sincerely yours." Or would it better to say "affectionately"? No, that's too intimate. The man hands him a bill. Ngo slips it between the pages of his dictionary without ever looking at it.

Ngo is a mediator between worlds -- a professional letter writer of the sort that used to exist in the old days. He chooses each word carefully, formulates cautiously, polishes the style of the letter. He knows how important words are and what harm they can do. Ngo doesn't just translate. He bridges the distance between people, advises and comforts them, discreetly and with perfect attention to form.

Ngo has worked at the post office since he was 17. He says he never missed a day of work, not even during the wars. He speaks the languages of the former occupiers fluently to this day. He learned French in school and English from American soldiers.

The second person to come to his stand is a young woman with red lipstick, long gloves and a little hat to shield her from the sun. She hands Ngo her Nokia mobile phone and shows him some text messages. They're written in French and sound romantic. Ngo translates spontaneously: "When I come and visit you, you'll show me Vietnam and teach me your language, I can hardly wait." The woman smiles with embarrassment. She met the Frenchman via a contact Web site on the Internet. Tomorrow she'll come back and compose an answer with help from Ngo.

The women at the service counters call him the man who writes love letters. He's set up many a marriage, they say, and he's a poet. Well, says Ngo, "maybe two or three marriages. Love usually wanes between the continents, what with two languages, two cultures -- you know. It's not so easy."

Ngo has heard thousands of such stories, some beautiful and others tragic. He searched for the children of US soldiers and relatives of Vietnamese citizens who escaped as boat people after the war. He's witnessed much suffering. He's not giving any details. His customers pay him for his silence.

Sometimes Ngo receives mail himself. The thank you letters arrive from all over the world and they are addressed to "Letter Writer, Main Post Office, Saigon." Ngo never receives e-mails. He hates computers and mobile phones, too. "Words that come from a machine have no soul," he says, adding that people who use such machines have lost all politeness and sense of proper style. During his lunch break, Ngo walks along the street where Vietnamese who live abroad sit in cafes wearing large sun glasses. They've arrived for the New Year's celebrations. They order latte macchiatos as sprinkler systems spray cool water vapor on their faces. Ngo orders noodle soup at a food stall.

Japanese tourists arrive in the afternoon and photograph him as if he were a fossil in a museum. The ladies at the post office counters staple the pages of faxes together and chat. In the middle of it all, new customers wait to be helped at Ngo's desk. They hand him their address books, as well as parcels for their relatives overseas. "Vitogo," says a woman who works in the market and wears a rice straw hat. "The street is called Victor Hugo," he says and rolls his eyes briefly, "like the famous writer." He writes the address on the shipping ticket.

Would Ho Chi Minh up there on the mural have liked what he does -- "connecting people" via his fountain pen? Ngo smiles. Politics, he says, is outside his province. He says he used to be observed by the police because he was suspected of betraying secrets to enemies of the state. Thankfully, that's over, he says. Today, Ngo adds, Vietnam has gone global and the world has become a complex and unpredictable place. This also means that there is greater demand for his work these days than there used to be.

Ngo is now the last letter writer in the city formerly known as Saigon. The penultimate one, his colleague Lieng, died 10 months ago and was not replaced. Ngo thinks the world could use more people like Lieng and himself.

Alas, he says, "It just doesn't want to pay the money for us any longer."