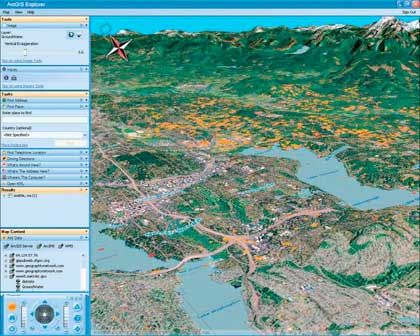 Maps with information about groundwater distribution in Seattle, created using software by ESRI.

Erik Born constantly keeps tabs on the whereabouts of his walruses no matter what part of the Arctic Sea they might decide to visit on a given day. Just off Greenland's ice-bound coast last spring, the Danish biologists managed to embed tiny tracking sensors in the animals' blubber. Now, he can follow his subjects through the four seasons, wherever they might migrate.

Born doesn't even have to leave his own office. Instead, Google Earth's digital globe rotates on his computer monitor. A position marker on the screen identifies the position of each walrus.

Google Earth wasn't really intended for scientists. The Google search engine's extraordinary globe, which is made up of hundreds of thousands of satellite photos and aerial images, first became well-known as a game for virtual hobby pilots.

was initially meant as a game for virtual hobby pilots. Users discovered that it was fun to fly over their own homes, swing up into space and, within seconds, swoop back down into the depths of the Grand Canyon. But now the scientific community is discovering how useful the software is for their own work.

With a single keystroke, biologist Born superimposes colored maps over the Arctic. The maps show him where the ice sheet is getting thinner and the direction in which the pieces of floating ice on which walruses like to catch a ride are drifting. All of the ice data, which comes from satellites and measuring buoys, is available on the Internet. By loading the data into the program, Born can detect how global warming is affecting the migratory behavior of his giant walruses.

And it's not just walruses. Google Earth played an unexpectedly useful role in the wake of last summer's disastrous flooding in New Orleans following Hurricane Katrina. Within just a short time after the hurricane struck, Google Earth had already added 8,000 post-disaster aerial photographs of flooded areas taken by the US National Oceanic and Atmospheric Agency (NOAA). The images allowed disaster relief workers to scan areas on the computer and search, for example, for passable roads.

Epidemiologists, meteorologists and urban planners have also discovered the magic of Google's model of the globe. For them, one of the program's most attractive features is the ability to graphically depict many different types of data on the digital planet. They can set position markers for cases of bird flu or the locations of crimes. The markers have already been used to label hundred of volcanoes. Clicking on the volcano markers opens a window containing images and explanatory text and, in some cases, even a Web camera shot of a smoking crater. Maps, showing data such as population density or ocean temperatures for example, can be layered over the globe.

It isn't surprising that the virtual globe, available as a free download in its basic version, has spread like wildfire. After all, it provides a place to put all the hopelessly scattered information we have collected about our world. Namely, on the earth itself. The digital globe finally depicts everything exactly where it belongs.

Computers have long been capable of processing geographic data. There are powerful, special programs that can create all kinds of colorful maps. And unlike Google Earth, which can only be used to display data, these programs -- experts call them geo-information systems, or GIS -- are also useful in analysis. But operating the programs is also frighteningly cumbersome. Their biggest drawback is that they spit out vast numbers of individual maps without providing a look at the whole picture -- they don't provide a digital globe rotating directly in front of the viewer's eyes.

Google Earth's popularity among ordinary users is injecting new life into the entire industry. "Google Earth offers globally available data in a very straightforward manner," says Klaus Greve of the Geographic Institute at the University of Bonn. "It's also very appealing to researchers who were previously intimidated by real GIS software."

Species distribution on the Web

Greve is working on one of the most ambitious projects in the field of geographic data. He is part of a global effort currently underway to develop a vast species database for everything that wiggles, walks and grows on the earth. Scientists want the database to automatically include information about the habitats of known plants and animals. The data is derived from the enormous collections of natural history museums, where millions of samples -- dried, stuffed or preserved -- are kept in long-term storage. 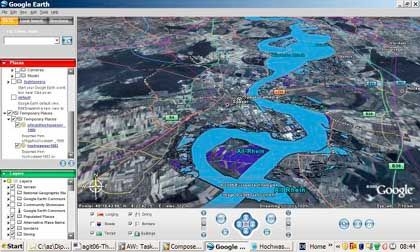 The database will also include the location and time of the find for almost a hundred million objects, data now being scanned and compiled. "For the first time, this will allow us to develop maps showing the global distribution of species," says Greve. "Google Earth can then be used to display their locations."

The program, though, can't do everything. Experts need special software to analyze the data more closely and embark, for example, on excursions into biospheres of the past. To study the spread of the grasshopper warbler and purse-web spider before the Industrial Revolution, for example, a data traveler would simply pull up the desired time window. "This allows us to discover how human beings have affected the environment in which they live," says Greve.

Some of the most avid users of the new geography programs are epidemiologists, who use them to track the spread of disease, and disaster control experts, who often have to make quick decisions over deployment of personnel and resources. Both groups need to be able to readily combine all kinds of data, something for which Google Earth has only limited capacity.

Consistency has also been a problem. "There is currently no open standard that everyone understands," says geo computer scientist Alexander Zipf of Mainz Technical University. But Zipf's team is working on the problem. Their first aim is to develop software that's just as useful for tracking catastrophic floods as reactor accidents. The objective is a constantly updated situation map that includes all of the data rescue and disaster relief teams need. Meteorologists will provide weather data, geologists the data on the flow of ground water in a given area and the Federal Radiation Protection Office the data collected by radioactivity sensors.

Only if the data from all sources fit together can the geo-programs utilize their true strength: computing. If necessary, they can even perform calculations for entire ecosystems.

A team of researchers armed with all manner of sensory equipment and measuring devices is currently traveling in Inner Mongolia, where desertification threatens to destroy vast areas of pastureland. When sheep and goats eat away all the vegetation, the topsoil becomes hard and brittle and is eventually blown away by the wind.

The question scientists want to answer is how many grazing animals the environment can support without being destroyed. To do so, they monitor the movement of dust and measure moisture and methane levels in the soil for different types of vegetation and climate. The computer takes the data derived from smaller areas and performs projections for comparable larger areas, creating models that can be used to simulate the long-term effects of pastural agriculture. But the scientists have to be careful not to become too enthralled with the images themselves. "The software produces these wonderfully colorful maps," says Lutz Breuer, an ecologist in the German city of Giessen who is also involved in the project. "It's tempting to interpret the maps in ways that aren't supported by the data." 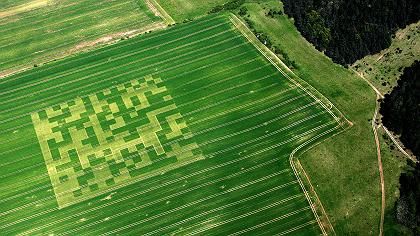 Google Earth has become wildly popular. Some have even begun making designs on the ground to greet users -- like this one in Germany.

Google Earth's globe would be far too basic for these types of environmental models. But the company has already announced coming improvements. The company apparently figures that the more the scientific community uses digital maps in its work, the more attractive the tool becomes for the general public.

This kind of thinking has also given new impetus to the established makers of GIS programs. The California-based firm Esri, a market leader in the field, plans to launch a completely revised version of its ArcGIS program in a few weeks. The new version will also feature a virtual globe accessible through the Internet.

"It allows you to fly around wherever you wish, just like with Google Earth," says Jack Dangermond, the CEO of Esri. "But we've also built in all kinds of tools for researchers." For example, before embarking on a virtual flight over Seattle, the program can incorporate data, such as regional ground water distribution statistics, into its map images.

Skyline, a US firm, has announced a new planet model that's also capable of processing moving images. The model, Skylineglobe, almost seamlessly inserts live video images into its panoramic views from space, offering a novel experience to the cyber traveler. As one flies over a soccer stadium, for example, an aerial view opens up of a match currently underway. A camera mounted on the roof of the stadium delivers the images, while the program automatically adjusts the camera angle.

Life gradually begins appearing on the globe, allowing users to observe their own planet in full swing. Although the technology is currently limited to traffic cameras and a few gimmicks, it does show the direction digital globes are taking: The point is not just to display more and more data in refined abstractions. At the same time, the artificial globe is becoming less and less complicated. One day, so goes the prediction, it will be identical with the world it depicts.

Correction appended: A translation error has been corrected in this text.