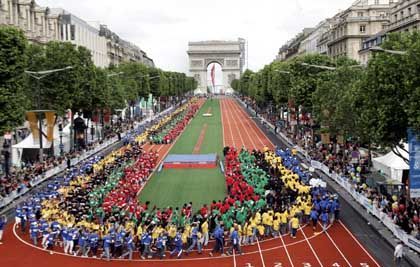 "Love of the Games:" An event on Paris's Champs Elysees advertising the city's Olympic bid drew over a million participants in June.

It is said -- with tongue planted firmly in cheek -- that French tourists who come to London often shake their heads in disbelief over the odd British habit of naming train stations and city squares after famous military setbacks. Think Waterloo. Or Trafalgar, the famous naval battle in which the cantankerous British Admiral Horatio Nelson -- known to strut about his beloved ship, "Victory," like a cock bedecked in all his medals -- was mortally wounded.

Victory and defeat, though, depend entirely on which side of the lines one is standing on -- a fact the French were reminded of last week. Tuesday was the 200th anniversary of one of the greatest British victories of all time. And in honor of Trafalgar's bicentennial, the Brits staged a dramatic maritime parade -- including 167 ships from 36 nations -- all sailing under the approving eye of Queen Elizabeth II and in tribute to the immortal and ever-glorious memory of England's greatest naval hero.

Best represented were the battle's losers, the French -- who, legend has it, started wearing black ties on their naval uniforms to symbolize their mourning over the loss at Trafalgar. They came with six ships, including the nuclear-powered Charles De Gaulle, which, weighing in at 40,600 tons and measuring 262 meters from stem to stern, was the most powerful and imposing ship present. And that from England's former enemy.

Now, one week later, a form of belated French revenge may be playing out in the Far East. On Wednesday, the location of the 2012 Olympic Games will be decided in Singapore. The French are desperate to beat out London, who the French consider their only serious competitor, although Madrid also has a good shot and Moscow and New York are both still in the running.

Two weeks ago, British Prime Minister Tony Blair humiliated French President Jacques Chirac at the failed EU summit in Brussels and, in so doing, tried to establish himself as the leading voice of Europe. The chauvinistic English press have feted Blair as the reincarnation of Nelson or of the Duke of Wellington, who beat Napoleon at the Battle of Waterloo. Even the usually restrained BBC went so far as to suggest a new Hundred Year's War, albeit with non-military methods, had begun. Chirac, meanwhile, has been transformed by a British magazine into "Jacques the Little," a play on French author Victor Hugo's famous polemic against Napoleon III (Le Petit).

The French nation, which has essentially given up on its president and has sent him spiralling downward in the opinion polls, is for now standing solidly behind Chirac. The slogan "Paris 2012" -- complete with the stylized heart in the middle -- is practically ubiquitous; it's on the columns of the national parliament building, on the Eiffel Tower, and in shop windows and cafes across the capital. Athletes, together with stars from all different branches of show business, are mobilizing in favor of the city they argue is the most luminous metropolis on the planet. 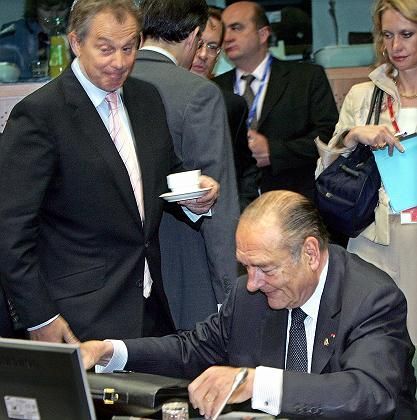 Blair may once again make life difficult for Chirac.

Chirac hesitated for a long time before he decided to make the trip to Singapore. A victory would give him a desperately needed nudge of public support, but a defeat would be just another fiasco -- on a steadily lengthening list -- which could be the final nail in the coffin of national depression. What would Chirac then have left to tell his people a short time later following the traditional, July 14 Bastille Day parade on the Champs-Elysees?

Stubbornly high unemployment numbers, weak growth, high taxes, companies moving production to low-wage countries, a large budget deficit, a trade deficit, a No to the European Union constitution. A No from the International Olympic Committee would mean Chirac's political death and would make him the least successful president of the entire Fifth Republic. His rival Blair, and even Spanish Prime Minister Jose Luis Rodriguez Zapatero or Russian President Vladimir Putin could better weather such a setback. For Chirac, it would be the complete destruction of his place in the history books. France would never forgive him this ignominy.

France is sending by far the largest delegation to Singapore -- made up of 250 athletes, functionaries, politicians, sponsors and state representatives. During their last attempt to get the Olympics, in 2001 in Moscow when Paris lost out to Beijing, Paris only brought along a 62-member delegation. This time, even France's union leaders were brought into the effort. Their role? To dispel IOC concerns that the strike-addicted French could shut down Paris's public transportation system during the games. 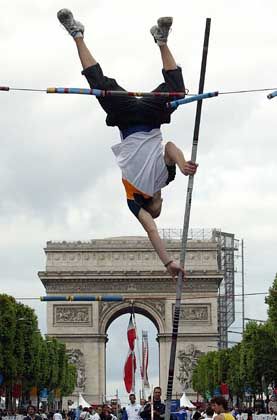 An athlete jumps near the Arc de Triomphe as the City of Paris promotes its 2012 olympic bid with a parade and sport demonstrations on the Champs Elysees called "l'Amour des Jeux" (The love of the Games).

Paris has been fruitlessly trying to get the Olympic Games since 1986. The mayor back then? Jacques Chirac. He dazzled the members of the Olympic committee during their visit, but in the end, the games landed in Barcelona instead. Paris didn't fail because of the concept it had developed for the games, but because of one Juan Antonio Samaranch, at that time the all-powerful puller of Olympic strings -- and native of Spain. Today, Samaranch is still the honorary president of the IOC -- for life of course. And Paris is now wondering if perhaps he will once again deny them and maneuver Madrid to the head of the pack.

The French capital has reserved a budget of some 7 billion for the games -- not even half of what London wants to spend on them. But the Paris infrastructure is light years better than its competitor across the channel. The Stade de France, for example, has been ready and waiting for the Olympics since it was built for the World Cup in 1998.

The economic boost for France could be huge. An estimated 40,000 jobs would be created in Paris, and Mayor Delanoe has promised mid-term revenues of 41 billion -- not a bad return on the investment. And unlike previous Olympics, the city wouldn't allow for any sport ruins to be left behind. The Olympic Village, with its 4,000 apartments to be built in the city's 17th arrondissement, are also intended to have a valuable social side-effect. Half of the apartments would later be converted into public and student housing -- all of which are scarce in downtown Paris.

Technically, the Paris dossier is considered perfect, a fact the IOC has already recognized. The two most-important event centers -- near the Bois de Boulogne in the west and the Stade de France in the north -- are located just 10 minutes from the planned Olympic Village. Add to that the fact that Paris has one of the most efficient metro systems in the world.

But according to experts, objective criteria only count for about one-third of the aspects considered in an Olympic bid. The rest is a complicated bouillabaisse of lobbying and commercial, political and diplomatic interests. In those areas, Great Britain could have a better chance of defending its bid against a politically and economically weak France, which has lacked optimism for years now. Instead, France is threatening to sink into the black hole of its own notorious sullenness. 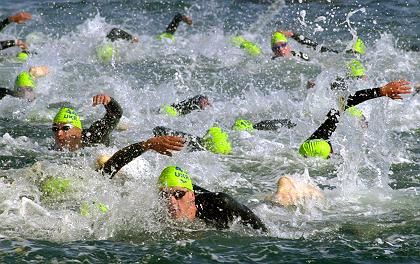 Which is why France is now so keen on once again showing the rest of the world the youthful face of an enthusiastic winner, as it did by winning the World Cup in 1998 and the European Championship tournament two years later. It's drooling over these games as if they were an anti-depressant -- the drug it needs to overcome its self-doubt, its fear and its uncertainty. In a recent public opinion poll, 83 percent of French have declared their l'Amour des Jeux the official slogan thought up by French ski legend and Olympic winner Jean-Claude Killy. Of the youth surveyed between the ages of 15 and 25, the percentage climbed to a staggering 95.

At the beginning of June, the city transformed the Champs Elysee, from the Arch de Triumph to the Grand Palais, into a giant festival arena, in order to prove the popularity of the games in France, for all the world to see. Close to 1 million people participated in the event, in which Parisians could participate in all of the 28 Olympic disciplines. Mayor Delanoe promised an Olympics that would be "popular, in solidarity, environmental and ethical." The presence of the country's top female athlete, track and field start Marie-Jose Perec, ensured a glossy, high-profile event with star power. Organizers spent more than 2 million on a spectacular advertising campaign to promote the event.

But Delanoe, after suffering the painful experience of losing a bid in 2001 to Beijing due to geopolitical considerations, has grown more modest today. Nothing would do more damage to his city than if its representatives were to offend Olympic officials with their proverbial arrogance -- especially African IOC members who sometimes feel the former colonial power hasn't done enough to deal with its past.

"The Paris Games won't be a games of vanity, extravagance or beautiful appearances," Delanoe has promised, again and again, for exactly that reason. On their day of fate, the representatives from Paris will be the first to have their bid scrutinized, with a 9 a.m. appointment on Wednesday morning. After his appearance, Jacques Chirac will then immediately depart for Scotland.

There he will be received by his possible nemesis -- golden boy Tony Blair -- who is the host of the G8 economic summit in Gleneagles.