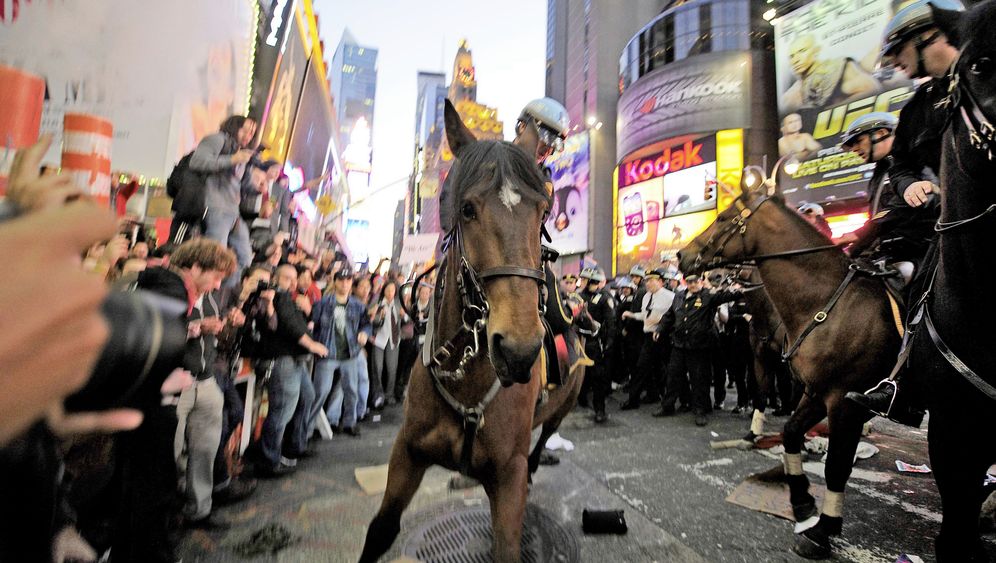 At first, the outraged members of the Occupy Wall Street movement in New York were mainly met with ridicule. They didn't seem to stand a chance and were judged incapable of going up against their adversaries, Wall Street's bankers and financial managers, either intellectually or in terms of economic knowledge.

"We are the 99 percent," is the continuing chant of the protestors, who are now in their seventh week of marching through the streets of Manhattan. And, surprisingly, they have hit upon the crux of America's problems with precisely this sentence. Indeed, they have given shape to a development in the country that has been growing more acute for decades, one that numerous academics and experts have tried to analyze elsewhere in lengthy books and essays. It's a development so profound and revolutionary that it has shaken the world's most powerful nation to its core.

Inequality in America is greater than it has been in almost a century. Those fortunate enough to belong to the 1 percent, made up of the super-rich, stand on one side of the divide; the remaining 99 percent on the other. Even for a country that has always accepted opposite extremes as part of its identity, the chasm has simply grown too vast.

Those who succeed in the US are congratulated rather than berated. Resenting other people's wealth is viewed as supporting class struggle, which is something very frowned upon.

Still, statistics indicate that the growing disparity is genuinely overwhelming. In fact, the 400 wealthiest Americans now own more than the "lower" 150 million Americans put together.

Nearly two-thirds of net private assets are concentrated in the hands of 5 percent of Americans. In comparison, the upper 5 percent of Germany hold less than half of net assets. In 2009 alone, at the same time as the US was being convulsed by mass layoffs, the number of millionaires in the country skyrocketed.

Indeed, if you look at the reports it compiles on every country in the world, even the CIA has concluded that wealth disparity is greater in the US than in Tunisia or Egypt.

In a book published in 2010, American political scientists Jacob Hacker and Paul Pierson discuss how this "hyperconcentration of economic gains at the top" also existed in the United States in the early 20th century, when industrial magnates -- such as John D. Rockefeller, Andrew Carnegie and J. P. Morgan -- dominated the upper stratum of society and held the country firmly in their grip for years.

Writer Mark Twain coined the phrase "the Gilded Age" to describe that period of rapid growth, a time when the dazzling exterior of American life actually concealed mass unemployment, poverty and a society ripped in two.

Economists and political scientists believe the US has entered a new Gilded Age, a period of systematic inequality dominated by a new class of super-rich. The only difference is that, this time around, the super-rich are hedge fund managers and financial magnates instead of oil and rail barons.

A Threat to the World Economy

The academics fear this change could have serious consequences for the country's economic future. As they see it, this extreme inequality threatens to dramatically slow growth in the world's largest economy. This is part of a development, they argue, that has been under way for years but remained largely hidden in the years of cheap credit, rising real estate prices and excessive consumption -- when it seemed everyone was on the way up. And the problems only came to light with the arrival of the financial crisis.

Through the 1970s, income for Americans across all social classes rose nearly in lockstep, by an annual average of roughly 3 percent. Starting in the 1980s, however, this trend underwent a fundamental transformation. Granted, the economy continued to grow -- but almost exclusively to the benefit of the country's top earners. The major economic expansion under President Ronald Reagan benefited only a few, and the problem only grew worse under George W. Bush.

At least since the beginning of the millennium, it has no longer been a simple matter of two societal extremes drifting further apart. Instead, the development is also accelerating. In the years of economic growth between 2002 and 2007, 65 percent of the income gains went to the top 1 percent of taxpayers. Likewise, although the productivity of the US economy has increased considerably since the beginning of the millennium, most Americans haven't benefited from it, with average annual incomes falling by more than 10 percent, to $49,909 (€35,184).

Even for a country that loves extremes, this is a new and unprecedented development. Indeed, as Hacker and Pierson see it, the United States has developed into a "winner-take-all economy."

The political scientists analyzed statistics and studies concerning income development and other economic data from the last decades. They conclude that: "A generation ago, the United States was a recognizable, if somewhat more unequal, member of the cluster of affluent democracies known as mixed economies, where fast growth was widely shared. No more. Since around 1980, we have drifted away from that mixed-economy cluster, and traveled a considerable distance toward another: the capitalist oligarchies, like Brazil, Mexico, and Russia, with their much greater concentration of economic bounty."

This 1 percent of American society now controls more than half of the country's stocks and securities. And while the middle class is once again grappling with a lost decade that failed to bring increases in income, the high earners in the financial industry have raked in sometimes breathtaking sums. For example, the average income for securities traders has steadily climbed to $360,000 a year.

Still, that's nothing compared to the trend in executives' salaries. In 1980, American CEOs earned 42 times more than the average employee. Today, that figure has skyrocketed to more than 300 times. Last year, 25 of the country's highest-paid CEOs earned more than their companies paid in taxes.

By way of comparison, top executives at the 30 blue-chip companies making up Germany's DAX stock market index rarely earn over 100 times the salaries of their low-level employees, and that figure is often around 30 or 40 times.

Hacker and Pierson are far from the only economists and political scientists to recognize a fundamental societal distortion. Larry Bartels, one of America's leading political scientists, also believes America has entered a new Gilded Age. Bartels' 2008 book on the subject, "Unequal Democracy: The Political Economy of the New Gilded Age," has drawn a great deal of attention and even been quoted by President Barack Obama.

"The really dramatic economic gains over the past 30 years have been concentrated among the extremely rich," Bartels writes, "largely bypassing even the vast majority of ordinary rich people in the top 5 percent of income distribution." He doesn't see this fundamental shift in the distribution of wealth as having resulted from market forces or drastic events, such as the financial crisis. Instead, he believes they are "the result of policy choices."

As Bartels explains, much as the economic giants of the Gilded Age developed such enormous influence that they could dictate basic political conditions, today's Wall Street bosses and CEOs have successfully arranged extensive deregulation for their industries. Indeed, he argues that this is the only thing that can explain how hedge fund managers suddenly started making billions of dollars a year. Former Citigroup CEO Sanford Weill, for example, kept a framed pen in his office as a symbol of his influence. It was the pen President Bill Clinton -- at Weill's instigation -- used in 1999 to sign into law legislation repealing the provisions in the Glass-Steagall Act of 1933 that separated the transactions of investment and commercial banks.

At the same time, Bartels writes, the wealthy receive enormous tax breaks worth hundreds of billions of dollars. In the 1970s, capital gains tax was 40 percent, and the highest income tax bracket paid a rate of 70 percent. Under George W. Bush, these rates dropped to 15 percent and 35 percent, respectively. For example, it emerged a few weeks ago that legendary investor Warren Buffett earned $63 million last year but was only required to pay 17 percent in taxes.

Did Inequality Cause the Crisis?

In a medium-term, the consequences of this societal divide threaten the productivity of the entire economy. Granted, American economists in particular have long espoused the view that inequality is simply a necessary side effect of above-average growth. But that position is now being called into question.

In fact, recent research indicates that the economies of countries experiencing periods of pronounced inequality often show considerably less growth and more instability. On the other hand, it also finds that economies grow faster when income is more evenly distributed.

In a study published in September, the International Monetary Fund (IMF) also concluded that: "The recent global economic crisis, with its roots in US financial markets, may have resulted, in part at least, from the increase in inequality" in the country.

An Evolutionary View of Economics

Cornell Univesity economist Robert Frank analyzes this development in his recently published book "The Darwin Economy." In it, he concludes that financial realities are best described not by Adam Smith's economic models but, rather, by Charles Darwin's thoughts on competition.

Frank writes that, with its often extreme deregulation, today's financial and economic system makes it impossible for individuals' self-serving behavior to ultimately contribute to the prosperity of society as a whole, as Smith had envisioned it. Instead, it leads to an economy in which only the fittest survive -- and the general public is left behind.

The question is: How long can the US withstand this internal tension?

Differences between rich and poor are tolerated as long as the rags-to-riches story of the dishwasher-turned-millionaire remains theoretically possible. But studies show that increasing inequality and political control concentrated in the hands of the wealthy elite have drastically reduced economic mobility and that the US has long since fallen far behind Europe on this issue. Indeed, only 4 percent of less-well-off Americans ever successfully make the leap into the upper-middle class.

"The major difference between this Gilded Age and the last one is the relative absence of protest," historian Gary Gerstle told the online magazine Salon in October. "In the first Gilded Age, the streets were flooded with protest movements."

Manhattan hasn't yet quite reached that point. 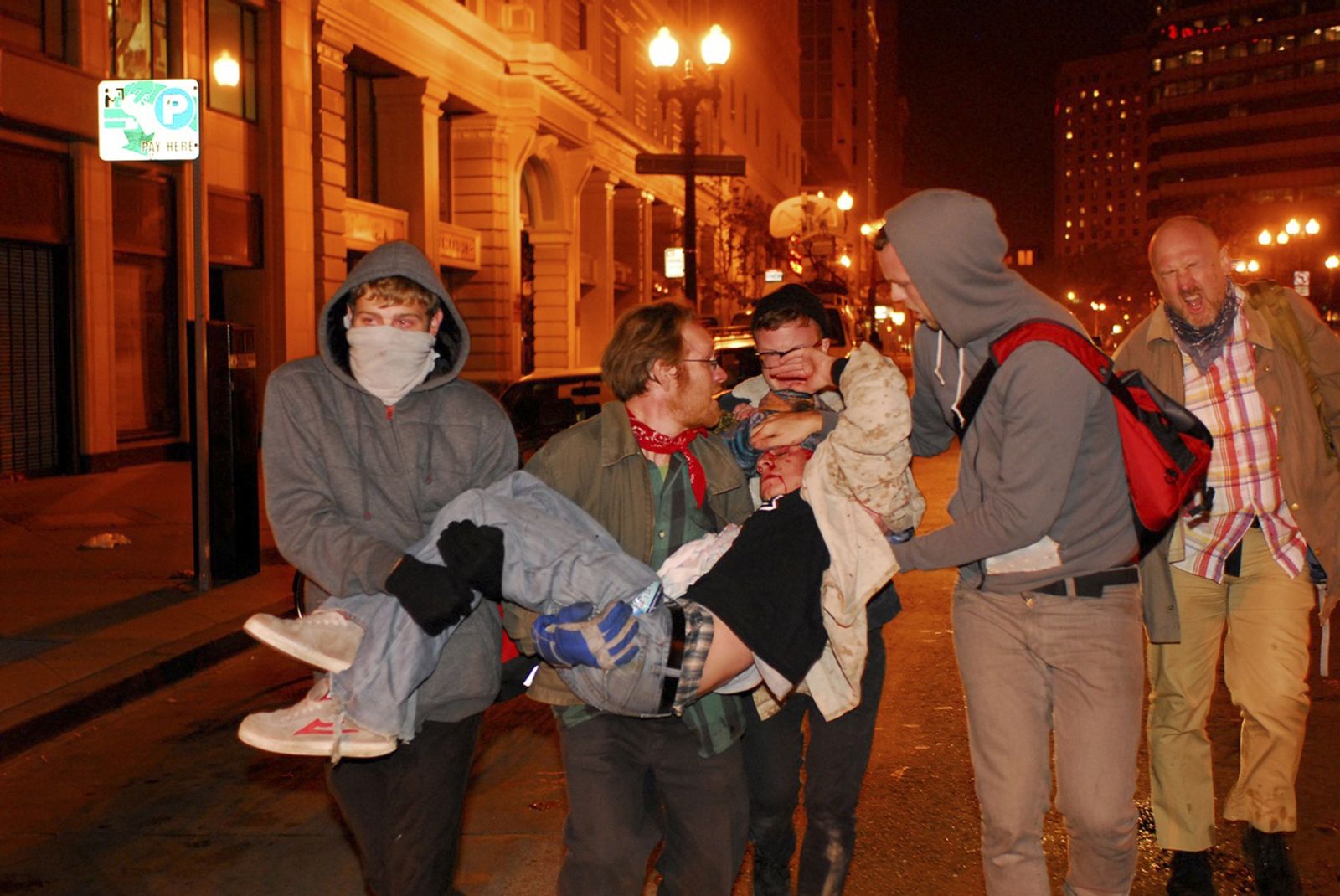 The protests have spread to cities throughout the United States and the world. Indeed, the Occupy Wall Street website claims that the movement "has spread to over 100 cities in the United States" and that there have been "actions in over 1,500 cities globally." Here, Occupy Oakland protester Scott Olsen, a former US Marine and Iraq war veteran, is carried away after reportedly being injured by a tear gas canister during a demonstration in Oakland, California, on October 25. 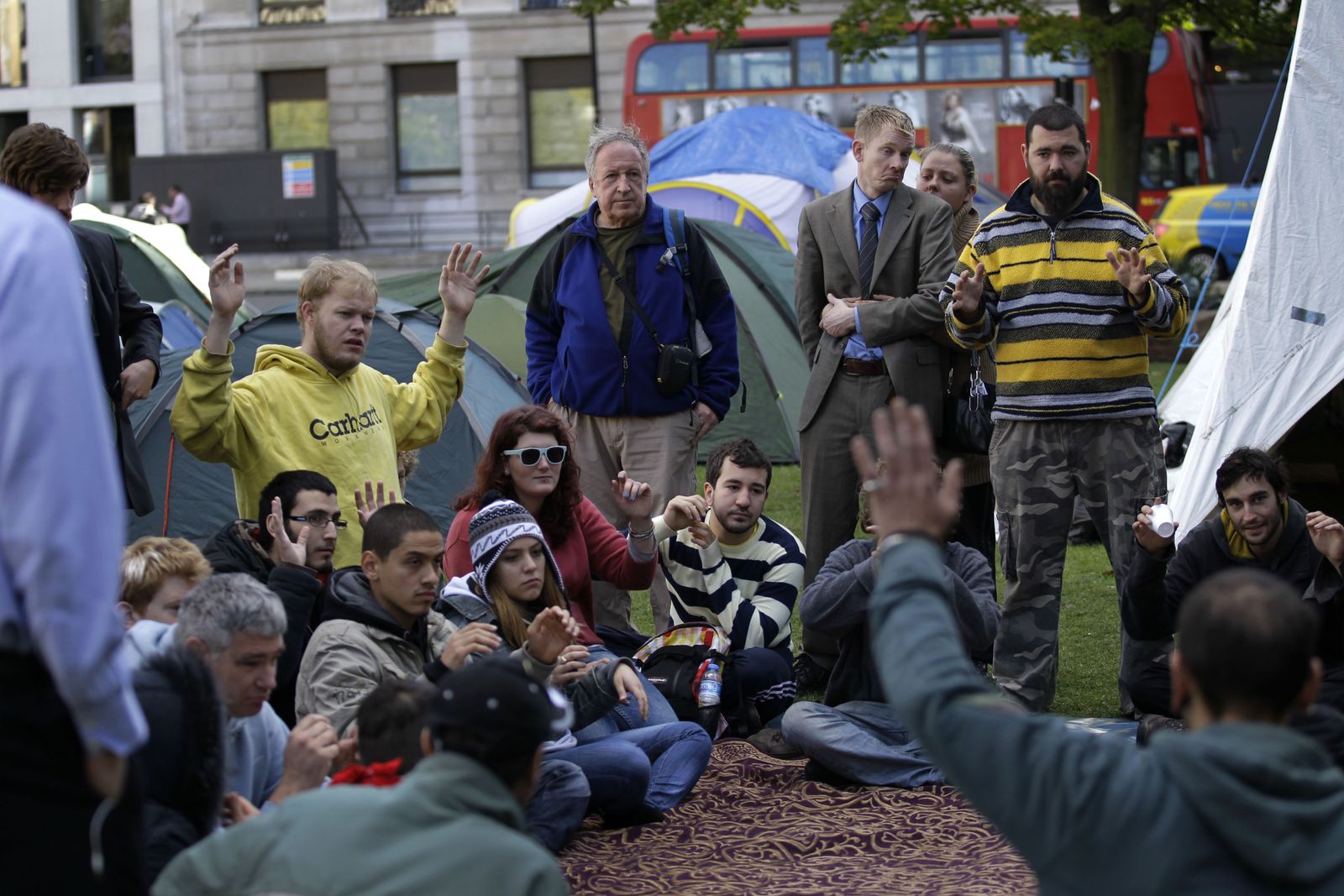