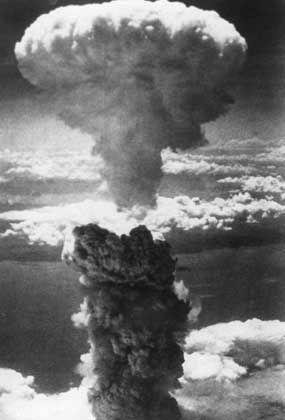 How close was Hitler to an atomic bomb? A German historian claims he was much closer than previously believed.

The United States needed 125,000 people, including six future Nobel Prize winners, to develop the atomic bombs that exploded over Hiroshima and Nagasaki in 1945. The uranium enrichment facility alone, including its security zone, was the size of the western German city of Frankfurt. Dubbed the Manhattan project, the quest ultimately cost the equivalent of about $30 billion.

In his new book, "Hitler's Bomb," Berlin historian Rainer Karlsch claims Nazi Germany almost achieved similar results with only a handful of physicists and a fraction of the budget. The author writes that German physicists and members of the military conducted three nuclear weapons tests shortly before the end of World War II, one on the German island of Ruegen in the fall of 1944 and two in the eastern German state of Thuringia in March 1945. The tests, writes Karlsch, claimed up to 700 lives.

If these theories were accurate, history would have to be rewritten. Ever since the Allies occupied the Third Reich's laboratories and interrogated Germany's top physicists working with wunderkind physicist Werner Heisenberg and his colleague Carl Friedrich von Weizsäcker, it's been considered certain that Hitler's scientists were a long way from completing a nuclear weapon.

Karlsch's publisher, Deutsche Verlags-Anstalt, is already issuing brazen claims about the "sensational results of the latest historic research." The Third Reich, says the publishing house, was "on the verge of winning the race to acquire the first functioning nuclear weapon." Even before the book was published, the generally reserved publishing house sent press kits to the media, in which it claimed that the author had solved "one of the great mysteries of the Third Reich."

The book is being presented Monday at an elaborately staged press conference. Karlsch, an unaffiliated academic, plans an extensive author's tour.

The only problem with all the hype is that the historian has no real proof to back up his spectacular theories.

His witnesses either lack credibility or have no first-hand knowledge of the events described in the book. What Karlsch insists are key documents can, in truth, be interpreted in various ways, some of which contradict his theory. Finally, the soil sample readings taken thus far at the detonation sites provide "no indication of the explosion of an atomic bomb," says Gerald Kirchner of Germany's Federal Office for Radiation Protection.

Karlsch spent several years in archives researching his subject, discovering many unknown documents on the history of science in the Third Reich. That includes a manuscript of one of Heisenberg's speeches which historians had previoulsy assumed had been lost. The manuscript alone would have been a significant find, but it wasn't enough to satisfy Karlsch or fully support his offbeat theory. As a result, in order to give his theory wings, he had to make some speculative leaps. 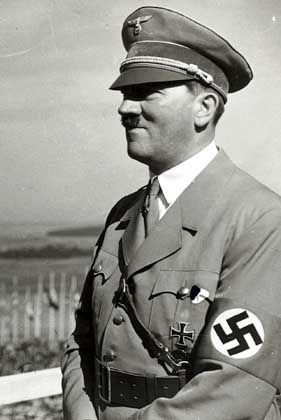 Did the Nazis conduct three nuclear weapons tests in 1944 and 1945?

For one thing, he focuses on Erich Schumann, who served as chief of research for Germany's weapons division until 1944. At Schumann's estate, Karlsch discovered records from the post-war period. Schumann was a former physics professor and wrote that in 1944 he discovered a method of generating the high temperatures (several million degrees Celsius) and extreme pressure necessary to trigger nuclear fusion using conventional explosives. The hydrogen bomb is based on this principle.

During World War II, explosives experts experimented with hollow charges -- essentially hollowed-out explosive devices -- which possess extremely high penetration force. The success of the bazooka is based on this effect and Schumann believed he could apply it to a nuclear weapon. He assumed that enough energy for nuclear fusion would be released if two hollow charges were aimed at each other.

It's a theory that deserves serious consideration. However, Schumann never claimed to have tested his theory in practice. Karlsch, however, believes it was applied. He claims Schumann presented his ideas at a conference in the fall of 1944. He then speculates that, under instruction from the SS, a team of physicists working with Kurt Diebner, a rival of Heisenberg, made use of the discovery.

Karlsch bases his theory in part on statements made by Gerhard Rundnagel, a plumber, to the East German state security service, the Stasi. In the 1960s, the Stasi became aware of rumors circulating in the former East German state of Thuringia that there had been a nuclear detonation in 1945. Rundnagel told the security service that he had been in contact with the research team working with Diebner. He said one of the physicists in the group had told him that there were "two atomic bombs in a safe." Rundnagel later said the two bombs were dropped over Hiroshima and Nagasaki. Despite that inconsistency, Karlsch believes the man should be taken seriously.

An argument full of holes 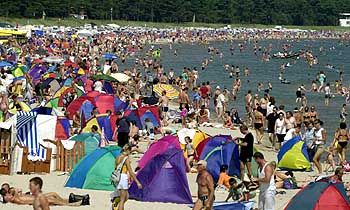 The island of Ruegen in the Baltic Sea is a popular summer vacation spot. Was it also the site of secret nuclear testing by the Nazis?

The biggest hole in Karlsch's argument stems from his inablility to prove how the Diebner group managed to implement Schumann's ideas. According to Karlsch, Diebner and his colleagues used a special device that combined nuclear fission and fusion to initiate a chain reaction. With the help of physicists, Karlsch came up with a design for such a weapon and presents it in his book. Joachim Schulze, a nuclear weapons expert at Germany's Fraunhofer Institute, took a look at Karlsch's model and said it would be "incapable of functioning."

Another theory Karlsch presents in his book -- that the Germany navy tested a nuclear weapon on the Baltic Sea island of Ruegen -- is nothing short of fantastic. His key witness is Luigi Romersa, a former war reporter for a Milan newspaper, Corriere della Sera. For years Romersa, a Roman who is now 87, has been telling the story of how he visited Hitler in October 1944 and then was flown to an island in the Baltic Sea. Romersa says that he was taken to a dugout where he witnessed an explosion that produced a bright light, and that men wearing protective suits then drove him away from the site, telling him that what he had witnessed was a "fission bomb."

Unfortunately, Romersa doesn't recall the name of the island he claims to have visited or who was in charge of the bizarre event. Karlsch believes it was Ruegen. He dismisses the fact that soil analysis shows no evidence of a nuclear explosion by pointing to erosion.

A more credible witness is the recently deceased Thuringian resident Clare Werner. On March 4, 1945, Werner, who was standing on a nearby hillside, witnessed an explosion in a military training area near the town of Ohrdruf.

"It was about 9:30 when I suddenly saw something ... it was as bright as hundreds of bolts of lightning, red on the inside and yellow on the outside, so bright you could've read the newspaper. It all happened so quickly, and then we couldn't see anything at all. We just noticed there was a powerful wind..." The woman complained of "nose bleeds, headaches and pressure in the ears."

The next day Heinz Wachsmut, a man who worked for a local excavating company, was ordered to help the SS build wooden platforms on which the corpses of prisoners were cremated. The bodies, according to Wachsmut, were covered with horrific burn wounds. Like Werner, Wachsmut reports that local residents complained of headaches, some even spitting up blood.

In Wachsmut's account, higher-ranking SS officers told people that something new had been tested, something the entire world would soon be talking about. Of course, there was no mention of nuclear weapons.

Did Stalin hear reports about the weapon?

And what about the 700 victims, supposedly concentration camp inmates, Karlsch claims died in the tests? This impressive figure is nothing but an estimate based on the number of cremation sites Wachsmut recalls. However, on the reputed detonation date, the Ohrdruf concentration camp, part of the larger Buchenwald complex, recorded ony 35 dead.

Another piece of evidence Karlsch cites is a March 1945 Soviet military espionage report. According to the report, which cites a "reliable source," the Germans "detonated two large explosions in Thuringia." The bombs, the Soviet spies wrote, presumably contained uranium 235, a material used in nuclear weapons, and produced a "highly radioactive effect." Prisoners of war housed at the center of the detonation were killed, "and in many cases their bodies were completely destroyed."

The Red Army's spies noted with concern that the Germany army could "slow down our offensive" with its new weapon. The fact that dictator Josef Stalin received one of the four copies of the report shows just how seriously the Kremlin took the news.

Unfortunately, the document Karlsch presents is of such poor quality that it cannot be clearly determined whether the report describing the explosions was written before or after the detonation Clare Werner claims to have witnessed.

More importantly, however, what Clare Werner claims to have seen could not have a detonation of the type of bomb the German informer sketched for the Red Army. That type of device would have required several kilograms of highly enriched uranium, which all experts, including Karlsch, believe Nazi Germany did not possess.

There is one expert who the author, and his boastful publisher, hopes will support his theories. Uwe Keyser, a nuclear physicist who works for Germany's Federal Institute of Physics and Technology in Braunschweig, is currently testing soil samples from Ohrdruf. Keyser believes that the readings for radioactive substances he has obtained so far are sufficiently abnormal so as not to rule out the explosion of a simple nuclear device. Of course, Keyser's readings could also be caused by naturally occurring processes, material left behind by Soviet forces stationed in Ohrdruf until 1994 or fallout from the Chernobyl disaster or nuclear weapons tests conducted by the superpowers.

Keyser says he needs "about a year" to conduct a more precise analysis. He also needs someone to continue footing the bill.