In Czechoslovakia, it all started with the students.

By late autumn of 1989, the Berlin Wall had already fallen, the border between Hungary and Austria had become porous and Poland had long since held largely free elections. But in Czechoslovakia, the communist government was still doing what it could to maintain a firm grip on the reins of power. It wasn't to last.

On Nov. 17, thousands of students took to the streets of Prague. The march was a peaceful one -- but it was nevertheless brutally suppressed by hundreds of police dressed in riot gear. Two days later, the crowds had ballooned in size and, on Nov. 20, fully 500,000 Czechs and Slovaks joined a peaceful march through the capital. The Velvet Revolution -- two weeks of non-violent demonstrations which eventually brought down the communist regime -- had begun. 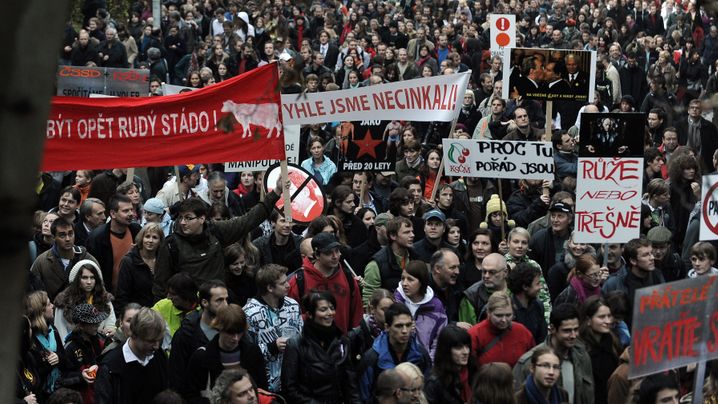 Of the numerous anti-communist revolutions that took place across the Eastern Bloc two decades ago -- during a year which Timothy Garton Ash calls "one of the best in European history" -- the Czechoslovak overthrow of its communist leadership comes closest, perhaps, to the ideal of democratic revolt. Hundreds of thousands of freedom-loving citizens passing out flowers to soldiers and jingling their keys as a symbol of freedom: What could be more egalitarian than that?

This week, the Czech Republic is marking the 20th anniversary of their Velvet Revolution. Many of the demonstrations are being recreated, thousands lit candles in downtown Prague in commemoration and Vaclav Havel, who emerged as the hero of the Revolution, is omnipresent. But how do the youth of that nation, whose forerunners were integral in bringing down the communist government, feel about the event today?

"Being a slave to capitalism is no different from being a slave to communism." That is what Jana Kajnarová's mother tells her. Kajnarová, who now lives in Berlin, says that nostalgia for the old communist system is particularly strong among the older generation.

"My mother -- who is sick and who is not sufficiently cared for by the state -- was happier 20 years ago," she told SPIEGEL ONLINE. "And many of the pensioners from my hometown Varnsdorf agree with her. Under communism, people worked with the certainty that one day they wouldn't have to work anymore," the 25-year-old adds. "Now, you just don't have that kind of security."

Kajnarová also admits to being disillusioned with the current government, saying that at the moment she believes the Czech Republic doesn't really have a real democracy. "There is simply no real opposition party good enough to pose a threat to (current Czech President) Václav Klaus," she says. Kajnarová goes on to describe the current government as a "farce."

'I Can Travel as Much as I Want'

However as much as Kajnarová can understand that point of view of pensioners in her hometown, and as much as she is disappointed with the Czech government, she still believes that things are better than they were before the Velvet Revolution. "I keep reminding (my mother) that we are free now, that I can travel as much as I want."

This attitude is one shared by many other Czech students this century, as a recent study by Czech polling agency CVVM, published in the Aktuálne newspaper, demonstrates. Czech youth view the fall of Communism as a wholly positive development, according to the survey. A study on attitudes toward the end of communism released by the Washington D.C.-based Pew Global Attitudes Project earlier this month indicates that almost 90 percent of Czechs aged between 18 and 29 approve of a system with multiple political parties. Eighty percent approve of the free market economy.

Ondrej Odehnal, 21, a student from Brno, a city in the south east of the Czech Republic, is certain all aspects of life have improved. He told SPIEGEL ONLINE how among other things, his family's bathroom facilities are far superior now, and said that he felt that corruption in the regime under which his parents had suffered had also distorted the minds of its citizens and their attitude toward the state.

Asked what he thought of his fellow Czechs, those who still mourn the Iron Curtain, he said: "Maybe it's the old communists who miss it? People talk a lot of nonsense."

His friend Michal Je, a 17-year-old also from Brno, agreed with him. "Today, there are very old people who like communism because they had a good position in communist times and were content," Je says. Ben Skála, a 24-year-old graduate from the University of Southern Bohemia in Ceske Budejovice has little to add: "The communists are swine," he says.

'Tired of Our Politicians'

Still, few young Czechs have illusions that they are living in the kind of democratic dream world that the Velvet Revolution made seem possible. Radys Kovaík, a 19-year-old student from Brno, follows politics but has no time for what he sees as the petty machinations of his country's parliament. He told SPIEGEL ONLINE: "I'm interested in politics but only in the important things. The politicians in our country often act like bickering children." Radys too believes that life in his country is inherently better now but he laments the fact that the average Czech's engagement with politics has waned simply because people are "tired of our politicians."

It is an attitude that has become widespread this autumn. A poll conducted by the public research group STEM found earlier this month that while two-thirds of Czechs see the Velvet Revolution as one of the most important events in Czech history, less than half -- just 43 percent -- are happy with the way the country has developed since then. A STEM poll released on Friday found that fully 87 percent of the population are unhappy with the political situation in the country.

On Tuesday, several thousand people gathered in central Prague to mark the anniversary of the beginning of the Velvet Revolution. The crowd retraced the route of that fateful student march that changed the course of Czech history, and it was made up of both the young and old. Indeed, many of those who spoke with SPIEGEL ONLINE travelled home for the celebrations.

But not all. Some preferred to stay in Berlin to go to the Marilyn Manson concert. "Almost all of us are completely different," Odehnal says. "(My generation) is free -- but indifferent and interested in other things. Our life style has changed completely. And we are interested in the future, not the past."