The sea bandits wore maniacal grins as they approached the "Seaborn Spirit" early in the morning of Nov. 5. Thinking they had found easy prey, they headed towards the cruise ship as it was peacefully sailing along the often lawless coast of Somalia. Most of the luxury liner's 151 passengers were still asleep, as the pirates began to open fire with machine guns from two motor boats. With bullets bouncing off the hull, the Norwegian Captain Sven Erik Pedersen warned his guests over the intercom: "Stay inside, we are under attack."

Charles Supple, a 78-year-old passenger, pulled his camera just as one of the pirates only 40 meters away steadied a rocket propelled grenade and fired. Supple saw a flash and quickly threw himself on the deck before the shot exploded just overhead. "It was extremely frightening," he said.

The Spirit was in extreme danger and a few of the ship's crew tried to wash the attackers into the sea with fire hoses. But it was a new high-tech weapon that allowed Captain Pedersen to escape the floating villains with only minimal damage to his vessel. In charge of ship security was a fearless former Gurkha -- the elite soldiers from Nepal in the British army. It was he who used a futuristic sonic cannon developed by the Pentagon to send the pirates packing.

Until now, it wasn't widely known that the US Defense Department was sharing the so-called Long Range Acoustic Device (LRAD) with commercial cruise ships. The weapon is essentially a small dish that beams hellishly loud noise that is deafening but not lethal. Weighing 20 kilograms and as big as a TV satellite dish, the device looks deceptively harmless. But once trained on its target, it blasts a tight beam of painful siren-like sound.

It's not known how the grinning pirates 160 kilometers off the coast of the Horn of Africa reacted as they suddenly were hit by the LRAD. But they were close, and the closer one is to the sonic cannon, the worse the effect is. It's possible they received permanent hearing damage, but at the very least they experienced an excruciating headache and ear pain to the point that they could no longer see or hear. They also quickly lost the desire to board the ship. Of course, even Captain Blackbeard would have quickly set sail when confronted with 150 decibels of pure noise.

It appears the small dish proved instrumental in scaring off the attackers, although Captain Pedersen, dressed in his bathrobe, took to the helm and began maneuvering to create dangerous waves with the ship's wake. He also attempted to ram the pirates, but was unable to hit the smaller motor boats. The brave Gurkha came under fire and was lightly injured from splinters, but he continued his sonic blasts. Eventually, the Seabourn Spirit, engines at full speed, left the Somalis behind. When the ship docked in the Seychelles, the passengers celebrated the captain as if he were Lord Nelson himself.

Ordered by the Pentagon 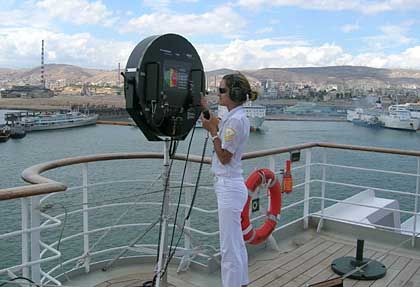 The LRAD was designed by a small San Diego, California firm called American Technology Corporation. The company has sold thousands of the acoustic cannon since 2003, including large orders to the US Armed Forces. Following the al-Qaida attack on the USS Cole in October 2000 that killed 17 sailors, the Pentagon wanted a non-lethal weapon to defend its ships that wouldn't necessarily kill potential attackers.

Around 300 LRADs are in currently in use in Iraq. The US Army even uses the sonic cannons to clear houses acoustically. The dish can even be used as a super megaphone -- enabling soldiers to warn drivers over 300 meters ahead of checkpoints.

Recognizing the potential, police in New York and Boston have also purchased a few of the $30,000 devices. So too, of course, have American and British cruise lines. Besides the Seabourn Spirit, the world's largest cruise ship, the "Queen Mary 2", is able to give pirates an earful.