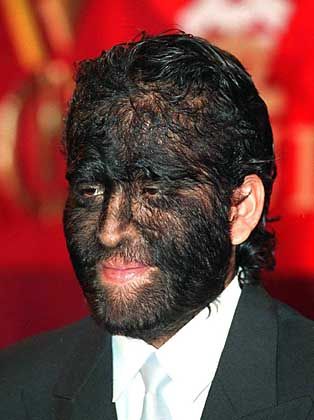 Exotic figures were not uncommon in the court of French King Henry II, where the king and his entourage were entertained by dwarfs, jesters and moors. Like many of his contemporaries, Henry II was immensely amused by the strange quirks of nature. It was 1547, and a dromedary, a leopard and a lion had just arrived from Africa at his Paris zoo in the gardens of the Hôtel des Tournelles.

But another strange being that appeared before Henry's astonished court in the same year surpassed anything they had seen before: a 10-year-old boy who was half-human, half-animal. The boy's entire face -- his forehead, cheeks, nose and ears -- was covered in about four inches of dark-blonde fur, revealing only his eyes and lips.

His name was Pedro Gonzalez, this odd boy with the sable-like facial hair. He was born on the Canary Island of Tenerife and had been given to Henry II as a gift by French corsairs. His life took an unexpected turn at Henry's court, where the young "wild man" showed a profound aptitude for French and Latin. Within a few years, Pedro Gonzalez had advanced to the position of servant at the royal table.

Roman art historian Roberto Zapperi reconstructed the varied life of the hirsute man and his family by examining archives, art collections and libraries, and published a book of his findings.

In days gone by, creatures like this Spaniard probably gave rise to werewolf legends. "Wolf people" appear in the mythologies of many regions and cultures of the world. In the Middle Ages, authors invented fairy tales about these so-called "wild men," covered with hair from head to foot and living in the deepest forests, where they supposedly survived on berries, fruits and raw meat. According to other tall tales, these frightening creatures inhabiting a realm someplace between human and beast lived on remote islands in faraway oceans, and their favorite delicacy was human heart braised in lemon sauce.

Modern medicine only began turning its attention to these "hair people" in the late 19th century. In 1873, the famous German pathologist Rudolf Virchow published an article in the Berlin Clinical Weekly on what he called "Russian hair people."

To this day, however, scientists know little about this odd aberration of nature. That's because the genetic disease, known in medical circles as congenital hypertrichosis, is extremely rare. According to experts, including Munich neuropediatrician Friedrich Baumeister, the genetic defect that causes the disorder is a one-in-a-billion occurrence. There have been only about 50 documented cases of hypertrichosis since the Middle Ages. Until the middle of the 20th century, carriers of hypertrichosis suffered fates similar to those of the Gonzalez family in the 1500s: they were displayed like rare wild animals at fairs, circuses and vaudeville shows.

Cases of the disorder have also occurred in modern times. Not too long ago, Baumeister came across a case in Germany involving a girl, now 14, whose face and back were covered with light-colored hair. The girl has been forced to undergo time-consuming, full-body shaves once every two weeks to avoid a life of ridicule. "You only notice that something isn't quite right," says Baumeister, "when you're within about six feet."

In school, the girl has even managed to occasionally capitalize on her rare genetic disorder. In some parts of Germany, children dress up as the Three Kings to go Christmas caroling. Instead of wearing a false beard, as other children do, she simply let the hair on her face grow, and was rewarded for her true-to-life costume with the best selection of presents.

Dermatologists have now turned to modern medical technology to help lessen the girl's predicament. They use laser beams or tiny hyperthermia probes to destroy the hair follicles, at least those in the most visible parts of her face. But the treatment must be administered skillfully to minimize the tiny scars it produces.

More radical procedures, such as chemotherapy or radiation therapy, are unacceptable because of the side-effects they would cause in victims of hypertrichosis, who are otherwise healthy human beings with normal life expectancy.

Two-and-a-half years ago, doctors in Kazakhstan discovered another victim of hypertrichosis in a remote mountain village near the Chinese border. According to the doctors, the face and body of the victim, a six-year-old boy, are covered by a dense, "monkey-like" fur. "He will have a difficult life," his mother said, "others will tease him and make fun of him, and every look in the mirror will be painful for him."

Studies in the local hospital, where the boy, to the astonishment of doctors, proved to be exceptionally lively, revealed nothing unusual about the boy's social and intellectual development. According to the doctors, he is highly sociable and possesses a sense of orientation that is unusually well-developed for a child his age.

A genetic defect causes the hair growth cycle in victims of this rare disease to run amok. The follicles from which the body hair grows are apparently incapable of switching from the growth phase to the dormant phase, which normally ends in the new hair falling out and the cycle beginning again.

This "curse of the hair" could be caused by a primeval gene stemming from our animal ancestors. Scientists believe that many of these primeval genes still lie dormant in the human genome, and that they have simply been switched off during the course of evolution. A mutation in the victims of hypertrichosis could have led to such a gene being awakened from its million-year slumber.

Doctors and biologists are familiar with a wide variety of such phenomena, known as atavisms. In rare instances, for example, children are born with additional nipples, which, like the rows of nipples normally found on mammals, run from the armpit to the pelvic region. Children are also occasionally born with a small tail-like protrusion at the base of the spine.

However, the atavism theory is contradicted by the fact that people suffering from hypertrichosis also have dense hair growth in areas - the nose and area around the eyes - that are largely devoid of fur in other primates like chimpanzees and gorillas. Experts such as Baumeister also point out that metabolic disorders can cause hypertrichosis on the entire body. The same phenomenon can also be acquired later in life in conjunction with certain diseases, such as multiple sclerosis, or as a side-effect of some drugs.

Both men and women affected by the mutation pass on the defective gene to 50 percent of their offspring. The line ends in family members who are born with normal hair growth.

There are various types of hypertrichosis, depending on the human hair type affected by the genetic defect. Some victims experience uncontrolled growth of the fine, non-pigmented lanugo hair, which covers the entire body of the fetus, including its face, beginning in the fifth month of pregnancy. Fetuses normally lose this hair suit between the seventh and eighth months of pregnancy. In some victims of hypertrichosis, however, this natural process takes years and often ends only in adulthood.

However, uncontrolled hair growth on the body can also affect fully pigmented terminal hair. The best-known example of this especially disfiguring form of hypertrichosis was Julia Pastrana, a Mexican Indian born in 1834, whose entire body - except the soles of her feet and her palms -- was covered with long, thick black hair. From 1854 on, Pastrana, along with her greedy husband, impresario Theodore Lent, traveled the world from one circus to another.

Gaping audiences in London, Berlin and Moscow were horrified by the sight of the "ape woman." But Pastrana was gentle and intelligent, could read and write, played the guitar and sang in a beautiful mezzo-soprano voice. She died at the age of 26, only five days after giving birth to a child covered entirely with hair. Pastrana had desperately hoped that her child would be born without the defect.

This form of hypertrichosis has also affected five generations of a Mexican family in which children were consistently born with darkly pigmented hair covering their entire bodies. Some now work as trampoline acrobats in circuses. Others shave their faces several times a day or remain as far away from other people as possible.

Neuropediatrician Baumeister believes that the family of Pedro Gonzalez, the famous servant of Henry II, owed his animal-like appearance to a third hair type known as vellus. This type of hair grows in all human beings as a soft, silky and often pigmented down in areas of the body where no terminal hair is produced. In this third form of hypertrichosis, however, this fine downy hair grows uncontrollably. In hypertrichosis victims, vellus, which is normally no longer than about a centimeter, can proliferate to lengths of up to 30 centimeters (about twelve inches) if left unchecked. Baumeister has so far found descriptions of nine such cases in the scientific literature. They include Polish-born Stephan Bibrowsky, whose mane-like facial hair gave him the appearance of a lion and who appeared as "Lionel the Lion Man" in circuses and vaudeville shows in the early 1900s.

A boy suffering from the same form of hypertrichosis was born in Germany in 1958. He has since disappeared, and the only remaining existence is an early photograph in the professional literature. It is an image of a boy who appears to be about six years old. He sits with his hands on his knees and gazes sadly into the camera. His face is so absurdly buried under a proliferating mane of hair as to give him the appearance of an old man ravaged by life.

Men seem to adjust to this genetic disorder more easily than women, as evidenced by the history of the Gonzalez family. Author Zapperi believes that "their excessive hair may actually have heightened the appeal of the males in the family, because it created the impression of exceptional virility."

Don Pedro, as the "furred one" liked to call himself, defiantly alluding to his ancestors, a family of chieftains in the Canary Islands, married a beautiful French woman with whom he raised several children, including three daughters and two sons who shared their father's animal-like appearance.

After the death of French King Henry II, the members of the Gonzalez family were given to other royal families, where they were gaped at and painted. Four large paintings of the Gonzalez family still hang in Ambras Castle near Innsbruck, Austria. The faces of the subjects, offset by white ruffled collars, look like an evil trick of nature. Their bearing gives them the appearance of elegant human beings, but the hair covering their faces suggests proximity to the animal kingdom.

After years of being gawked at, Enrico, the eldest son of Don Pedro, managed to trick his master into allowing the family to live quietly in the small village of Capodimonte on Lake Bolsena in Italy. He convinced his master, Cardinal Odoardo Farnese, that he and his family, as wild creatures, were magically drawn to a life in nature. Farnese, a religious man from Rome, was ultimately unable to resist Enrico's convincing but tall tale of the powers of animal instinct.

In the remote village, inhabited by only a few farmers and fishermen, Enrico brought together the widely dispersed members of his extended family, married healthy women several times, and managed to achieve modest wealth as a businessman. His father, Don Pedro, spent the last few years of his life in Enrico's idyllic village, and died peacefully at the advanced age of about 80.

But the fate of the hirsute Gonzalez daughters is more reminiscent of the suffering of "ape woman" Pastrana. Like their father, they lived long lives, but theirs was a hidden existence.