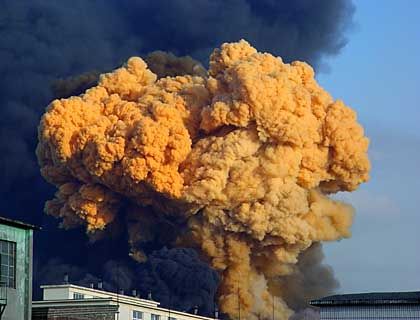 On Friendship Street in the northeast Chinese city of Harbin, hundreds of people carrying white canisters, red buckets, plastic bowls and cooking pots wait for a tanker truck. They have been waiting here in the bitter cold since early morning -- though the water delivery isn't scheduled until 11 am. Two police officers and three women from the neighborhood committee keep an eye on the crowd. Their job is to ensure that the water is fairly distributed when it arrives -- at about five liters per person.

Other Harbin residents have lined in front of the Century Buddha Restaurant on Yilan Street. Twice a day, for an hour and a half at a time, the owner dispenses free water from his private well. Meanwhile, customers at a local supermarket make off with entire pallets of sparkling water and juice. "We are now frugal with water," says a woman in a red woolen cap. "First we use it to clean vegetables, then to wash our hands and finally to flush the toilet."

The water emergency in Harbin, an industrial city of 3.8 million, comes on the heels of an environmental catastrophe with as yet unforeseeable consequences. About 100 tons of toxic chemicals have been floating down the Songhua River ever since an explosion in Jilin, located 400 kilometers (248 miles) upstream from Harbin, released highly toxic benzene compounds. At least five people were killed and dozens injured in the Nov. 13 accident in Chemical Factory 101, and the slick, slowly traveling down river toward Russia, threatens the drinking water supply for more than 10 million people between the northeast Chinese city of Harbin and Khabarovsk in Siberia.

True to form, the Chinese Communist Party attempted to twist the disaster into a propaganda victory, sending convoys of water trucks decorated with red banners ("Love the people -- deliver water") from other cities and ordering soldiers to drill for new wells. But try as it might, the People's Republic cannot obscure the sheer magnitude of this environmental catastrophe. Never before has a city as large as Harbin had to shut off the taps to avoid poisoning its residents. 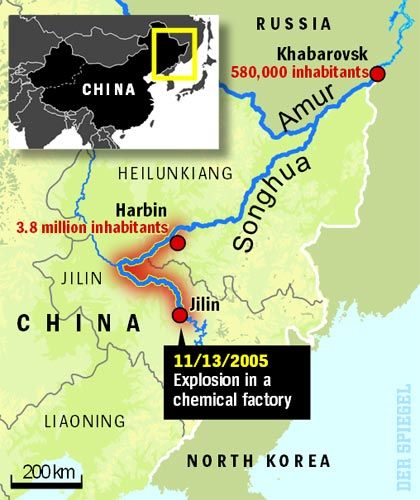 Even if water began flowing once again to the city's residents on Tuesday, the horrific environmental catastrophe reveals the flipside of the socialist economic miracle. Secretiveness and sluggish crisis management highlight the price the Chinese are paying for their boom. And even as westerners envy the half-communist, half-capitalist country for its impressive growth figures and endless backyard market, China is no longer merely the world's factory. It is also the world's toxic waste dump.

China's rise as a global power, achieved with high economic growth rates, is reminiscent of the conditions in the era of early capitalism. Everything that drives production is good, and everything that slows it down -- safety technology, for example, that prevents industrial accidents from leading to massive factory explosions -- is harmful. The result is exploding tanks, burning factories, collapsing mine pits and all manner of toxic leaks. According to official statistics, 350 Chinese die each day in industrial accidents, but the unofficial figure is likely to be much higher. "Occupational safety is a serious problem, because the number of accidents and deaths remains high," said Wang Dexue, Deputy Director of the State Office of Occupational Safety, commenting on the horrifying figures from the country's manufacturing industries.

Adding to the problems are economic reforms that have made many businessmen greedy. China's laissez-faire brand of socialism doesn't prevent executives from spending their money on cars and villas instead of investing it in worker safety and environmental protection. Although the government is constantly vowing to monitor manufacturers more closely, local officials and party leaders are often in bed with the captains of industry in China. This Mafia-like alliance between the politically and economically ambitious is known as "local protectionism."

Chen Bangzhu, an environmental expert on Beijing's Parliamentary Council, says he recognizes an "irrational development" in his country. In an interview earlier this year, Pan Yue, the deputy minister of government environmental agency SEPA, predicted a bitter end to the economic miracle. "This boom will soon come to an end," he said in an interview with SPIEGEL,  "because the environment isn't cooperating anymore."

Swimming or suicide in the Yangtze

The negative consequences of the boom are devastating. Five of the world's 10 most polluted cities are in China. More than two-thirds of all Chinese rivers and lakes are turning into sewers -- even before the recent accident, the Songhua River was hardly a model of cleanliness -- and more than 360 million people have no access to clean drinking water. A toxic soup splashes through the country's waterways, while people living along the banks die from cancer at above-average rates. Nowadays, the then 72-year-old former party chairman Mao Zedong's legendary swimming outing in the Yangtze River in 1966 would no longer be seen as evidence of his strength, but more as a suicide attempt.

The Chinese capital itself is suffocating in its own filth and pollution. On many days of the year, Beijing is covered by a dome of pollution made up of the exhaust gases from more than 2 million cars, as well as the dust from construction sites and cement plants. "The government doesn't want to talk about it before the 2008 Olympic Games, but the level of exhaust gases in Beijing's air is dangerously high," warns a high-ranking government official. Satellite measurements have revealed that Beijing is covered by a blanket of nitrogen dioxide of previously unheard-of proportions.

And there is no improvement in sight. To meet its rapidly growing demand for energy, the government is building coal power plants, with more than 500 planned for the next few years. Although China has its fair share of windmills and Beijing promotes renewable energies, well over two-thirds of the country's electricity requirements are met by burning coal.

"Because energy is so scarce, the Chinese are now burning anything that looks like coal," complains a German environmental expert. And because filters are not in compliance with international standards, emissions of sulfur and nitrogen oxides are "a dimension higher" than in other industrialized nations. "Half of all coal power plants," admits a SEPA official, "violate environmental regulations."

The People's Republic, which could soon surpass the United States as the world's largest producer of greenhouse gases, has lost its ecological balance and is paying a heavy price as a result. About 400,000 people die prematurely each year because of the polluted air they breathe. Experts estimate the annual loss at 8 to 15 percent of the gross domestic product -- or up to $250 billion -- a figure that does not include the costs of treating cancer, skin conditions and bronchitis.

The Chinese leadership has become increasingly concerned about the possibility that environmental damage could jeopardize China's industrial ascent. After the Harbin incident, even Prime Minister Wen Jiabao admitted that the environmental situation is "bleak" and called for "sustainable growth." But many other party leaders see this kind of talk as nothing but Western social nonsense. They prefer to follow the lead of Mao, who summed up his take on the environment in 1958 when he said: "Make the high mountain bow its head; make the river yield its way." Today's comrades, profiting handsomely from industrial growth, believe it is cheaper to clean up in the distant future than to invest in protecting the environment today.

Besides, the system promotes environmental dramas such as the one playing out in Harbin now. The careers of party functionaries are tied to economic success figures, not to fresh air and clean water. "The only thing that counts, when it comes to keeping their jobs or getting a promotion, is what they're doing to increase the gross domestic product," says Sze Pang-cheung of Greenpeace China in Hong Kong. Chinese courts, says Pang-cheung, are notorious for disallowing environmental suits or failing to execute sentences against polluters. Besides, it is usually cheaper for factories to pay fines than to install filters or treatment systems. 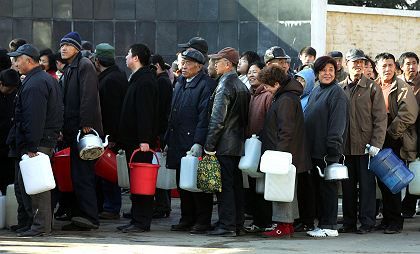 Lining up for water in Harbin, China. Water was flowing again on Tuesday.

Whenever catastrophes do occur, the communist party responds using the same old Stalinist approach. In Harbin, as with the SARS crisis two years ago, authorities initially tried to conceal or at least downplay the true scope of the disaster. At first, the managers of the Jilin PetroChemical Company claimed that the accident posed no danger whatsoever to the Songhua River. State-owned television followed suit and announced that the "accident caused no serious environmental damage." And when the Harbin city administration announced its plans to shut off the water supply, it first offered the transparent excuse that the pipes needed "maintenance work." No one believed that the city's entire system of pipes was shut down for maintenance at -10°C (14°F), and the icy city was soon filled with rumors of terrorist attacks or a predicted earthquake.

Anyone with money fled the city by train or air. Those who stayed cleared the shelves in the food sections of places like Wal-Mart and Metro. The Beijing youth newspaper called the PR gaffe "unjustifiable lies."

Bit by bit -- and fully ten days after environmental officials had detected the toxic spill -- the government began revealing the facts. "They should have told us the truth from the very beginning," complains Zhao, a retiree doing his morning calisthenics in a blue winter coat and blue cap. Once again, he says, the poorest are the worst off. "I must now depend on expensive bottled water. And if I fall ill because of the poisons in the Songhua River, I'll have to pay the medical bills myself."