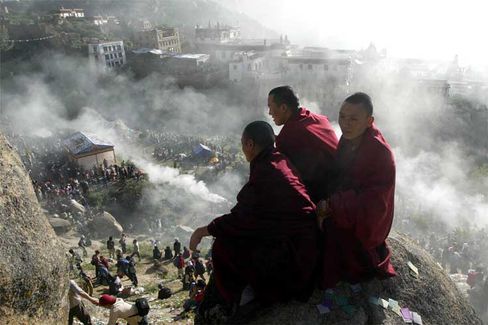 A new railroad is connecting Tibet closer to China.

Looking from the imposing Potala Palace into the Lhasa River Valley, one glimpses a white bridge far in the distance. For the moment, it is empty. But soon, trains will be rolling across and into the brand new train station now under construction on the opposite bank. A whole new quarter of Lhasa is appearing out of nowhere.

Arriving by train in Tibet -- the Roof of the World -- has long captured many an imagination, most notably that of Mao Zedong. For decades, though, the project was prohibitively expensive and intimidatingly complicated. But, now it's quickly becoming reality. Indeed, construction workers have completed the last stretch of track of what will become the highest altitude railroad in the world.

Opening the line is still a ways off; over the next 12 months the new track will be tested. It is unclear how the diesel engines of the locomotives will function in Tibet's thin air. But as of July 1, 2007, regular traffic should be circulating between Lhasa and the city of Golmud, 1,142 kilometers away in the province of Qinghai. The line would complete the link between Tibet and China proper.


It's a monumental undertaking, the sort of prestige project that Beijing has shown an inclination for in recent years. Over the last four years, 35,000 workers have laid down track in bitter cold and at high altitude. The project cost 33 billion yuan (approximately €3.46 billion). That's 10 billion yuan more than originally planned and more than Beijing has spent, over the last 50 years combined, on hospitals and schools in Tibet.

Risky for Workers and Passengers

Never before has a railroad been built at such high altitudes and on such difficult terrain. Almost the entire route lies over 4,000 meters (13,100 feet) high - at its highest point, it is 5,072 meters (16,640 feet) above sea level. The highest station on the stretch - there are 29 in total - rests 4500 meters (14,764 feet) in the town of Nagqu. Almost half of the route travels across permafrost; other stretches, across ground that, when the summer thaw rolls around, is covered in water.

The thin air puts not only rail workers at risk, but also future passengers. The solution? Much like the cabins of passenger jets, the Canadian-made train cars will be pressurized to protect guests from potentially fatal altitude sickness. Doctors will also be on board each of the eight daily commuter trains to attend to the sick.

Prime Miniter Hu Jintao called the feat "an unprecedented triumph of the railroad," recently when the final stake was driven into place. The project is proof, Beijing says, that it only wants the best for Tibet -- a region China seized as its own in 1951.

Many Tibetans are not so sure: As soon as the trains begin to run, they fear, Beijing will have ever tighter control over the region. A functioning railroad means ever-more Chinese on the Roof of the World. Tibetans, they are worried, will lose even more importance in their own homeland and the Buddhist religion and Tibetan culture will be endangered as the risk of ethnic tension rises.

Many Chinese are already seeking their fortune in the Himalayas. Some open small shops, while others work in construction in Lhasa and other Tibetan cities. With immigration came prostitution, offered in hundreds of "beauty salons." Nobody knows though how many have come; Chinese authorities working in Tibet refuse to release statistics regarding immigration to the region.

The railroad is also a logistical windfall for the army says the London-based human rights organization "Free Tibet Campaign." The group claims that the rail grants China the ability to establish new military bases and store nuclear weapons, airplanes and rockets in the region. If Tibet's neighbor, India, sees such moves as a threat, the entire region could be destabilized.

Until now, Tibet has only been accessible to the outside world by three difficult-to-negotiate roads. The region's mineral resources can now be mined more efficiently. "The income of Tibetans will rise," promises a Chinese official. "The train will bring progress to Tibet. It will bring capital, projects and people."

The Chinese already plan to extend the line beyond Lhasa. By 2017 two more stretches will be added: to Linzhi in the East and to to the second-largest Tibetan city, Xigatse.