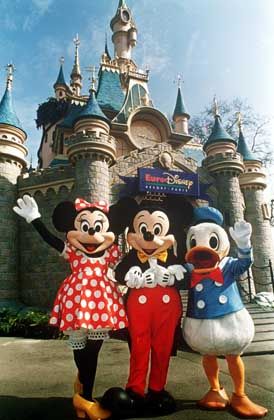 In Marne-la-Vallée, just one hour by train from the French capital, Euro Disney has been unrolling the Christmas celebrations everyday since mid-November. Ads for the amusement park show a fake Santa Claus putting on a show "with real reindeer," while Snow White's Castle turns into "a glittering ice palace." A four-night stay in the park's Santa Fe Hotel can be had for as little as €187 ($247).

But even that bargain may be more than shareholders at Center-Tainment AG, a Swiss-based company, can afford after it announced a "hostile takeover" of Euro Disney at a bizarre press conference in Paris 11 days ago. Since management made the announcement, Center-Tainment's stock price on the Frankfurt Stock Exchange has plunged from €20 to €0.18 a share -- a 99 percent drop.

It was a fine mess, but it came as little surprise. It was preceded by a press conference at the small four-star Hotel Littré in Paris, where five Germans told the astonished world press that Center-Tainment planned to submit a takeover bid for Disney's ailing European subsidiary. Ulf Werner, the company's Hamburg-based chief executive, explained that Euro Disney's long-suffering shareholders would receive one share of Center-Tainment stock for every 200 shares of Euro Disney stock.

But it quickly became clear how amateurish the megalomaniacal safecrackers had been in planning their forced entry into the artificial world of Donald Duck & Co. The Euro Disney shares listed on the Paris Stock Exchange have no voting rights. Even a package consisting of more than 50 percent of shares would not have automatically sufficed to eject Disney, Euro Disney's US parent company. The Americans were sufficiently astute in developing their corporate structure to prevent such takeover attempts.

"Center-Tainment admits, with no ifs, ands or buts, that the outcome of the conference was unsatisfactory," the company announced last week. The men behind the takeover attempt haven't been heard from since.

Both the French stock exchange supervisory authority and Germany's Federal Financial Supervisory Authority (BaFin) are now investigating the shady would-be takeover artists. "We are looking into the case," said a BaFin spokeswoman. "We are conducting a preliminary investigation into suspected price manipulation."

The incident marks a low point in what has been a 14-year tragedy surrounding the amusement park outside Paris. From the very beginning the French, as traditionally anti-American as they are, feared a cultural invasion and punished the park by ignoring it. From then on, Euro Disney's debts began to grow. 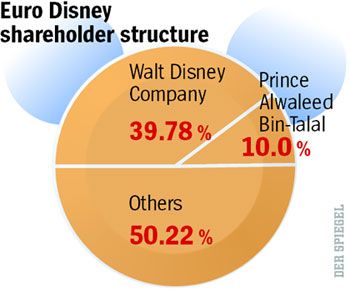 After a refinancing in 1994 and major ad campaigns, business at the park did pick up for a few years, but the success was short-lived. By the turn of the millennium, large cracks began appearing in the dream factory's foundations once again. Suddenly, Euro Disney even stopped servicing its debts. Although the issue of the company's billions in loans is considered settled today, the park's day-to-day operations remain deeply in the red. With a loss of almost €90 million in the past fiscal year, Euro Disney remained a disappointment to its shareholders. Its share price is currently hovering around seven cents.

It has become easy prey on the stock exchange -- exactly the kind of company that attracts gamblers who attempt to manipulate stock prices with the occasional adventurous approach. Nor is the company alone in being attacked in this way. In the past, dubious financial jugglers have periodically attempted to unscrupulously profit from of the German company IG Farben's former Nazi connections. During World War II, the Nazis used Zyklon-B, a poison gas manufactured by a company jointly owned by IG Farben and Degussa, to murder Jews in concentration camps. Three years ago, IG Farben shareholders filed a suit against UBS, a major Swiss bank, in an attempt to force the financial services behemoth to hand over billions in war profits made by a subsidiary it had acquired from IG Farben in 1959.

For years, UBS's ownership of the former IG Farben subsidiary Interhandel AG remained disputed. The question revolved over whether the company was independent after 1945 or whether it still belonged to the parent company. The question had never been sufficiently addressed, and speculators had their eyes on Interhandel's estimated €2.2 billion. The incident temporarily produced gigantic increases in the price of the rejuvenated IG Farben's stock.

The experts at Germany's BaFin will likely encounter similar manipulation attempts in their Disney investigation. Center-Tainment's involvement in the Euro Disney case is reminiscent of the IG Farben rally, not only because the company's stock price experienced similarly massive fluctuations (from about €1 to €30 and back again), but also because of certain personnel similarities. The German investigation has led, once again, to Rüdiger Beuttenmüller, a Hamburg investment manager who was previously convicted of improper accounting practices. In 2003, IG Farben investor Beuttenmüller threatened to sue UBS, and his actions helped trigger the shareholder lawsuit.

Beuttenmüller originally planned to use Center-Tainment to raise capital for an amusement park to be called Krawallino in the northern German city of Bremerhaven. But soon there was nothing but trouble with the planned park's creators, and the deal was cancelled in early October. Suddenly CEO Werner and his shady entourage found themselves with a publicly traded company that lacked both a business and substance. Undeterred, the company's executives decided to embark on the Euro Disney venture.

Unlike Beuttenmüller, Werner still believes that the project will materialize and continues to tell his Christmas fairy tale: "We now plan to analyze the deal. This exciting plan is not off the table."