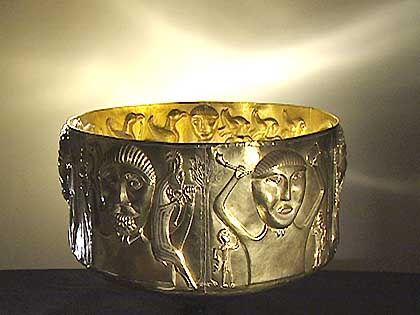 The golden Chiemsee cauldron: an aura of mystery

So there it was, the legendary "Holy Grail" -- in a safe not far from the Zurich airport. Investor Svetlana K. from Kazahkstan had been prepared for almost anything on that day last March. But when she saw what had been described as "probably the most important art-historical discovery in the Western Hemisphere" in front of her, all the other superlatives used in the four-page prospectus faded into the background. "An object of such pre-eminence has probably never been introduced onto the open art market," the document stated, adding that, "Given the proper promotion, experts believe its value could reach a sum of around €1 billion" ($1.4 billion).

A veritable dream bargain seemed to be just within reach: The vessel -- made of 11 kilograms (24.3 lbs) of gold, decorated with Celtic ornaments and said to be more than 2,000 years old -- did indeed exercise an irresistible fascination on the beholder.

But the woman from Kazakhstan had been warned that there was one hitch: She had to snap up the bargain quickly. After all, an investment opportunity like this doesn't come along every day, she was told. That made sense to Svetlana K. and her business partner Vladimir T., and a short time later they transfered the equivalent of €1.1 million ($1.5 million) to Switzerland via a Moscow bank, in exchange for a share of the potential earnings from the marketing of the golden pot.

The Swiss million-dollar deal represents the most recent climax in an adventure story that began with the discovery of the cauldron in the Chiemsee, a lake in Bavaria, in 2001. From the very beginning the artifact has been accompanied by an aura of mystery. Whether it involved occult Nazi groups, gloomy Celtic rituals or even black magic intrigues -- the golden pot could always be made to somehow fit into the story. There were even rumors that the Bavarian state government was holding back secret analyses of the heathen pot -- "presumably in response to pressure from the Catholic Church." Others claimed that coded messages lay concealed inside the vessel's golden reliefs.

The only reliable truth about the origin and use of the cauldron is that no one knows anything definite about it. But what is certain is that another story lurks behind the mysticism and magic. And that story is set in the rough demi-monde of dubious art dealers and shady jugglers of capital.

The Bavarian Finance Ministry is involved in the saga, as is 43-year-old professional treasure hunter Jens E. -- a man who is considered a big shot in his milieu. As early as 1996, he registered a company for the trading and procurement of excavation findings.

But Jens E.'s great coup is said to have come only in 2001, when an acquaintance told him about a strange discovery in the Chiemsee. The hobby diver, locally known as "Lui," had come across a strange object in May of that year, while diving off a beach near the town of Arlaching. The object "lay about unobserved" for weeks, insiders say. It was only in the summer that Jens E. realized how valuable it was and offered the diver his services as an agent. Once "Lui" agreed, Jens E. is said to have engaged art dealer Thorsten K. Between the end of 2001 and the beginning of 2002, Thorsten K. then passed the freshly polished and gleaming golden pot on to the Bavarian State Archaeological Collection in Munich to be analyzed.

The collection's director, Professor Ludwig Wamser, had to begin by answering the burning question: Is the object even antique? The reliefs -- horned divinities, warriors blowing their horns and figures with ancient swords -- seem genuinely Celtic. But the manufacturing process -- and in particular the nature of the soldering technique used -- led the Bavarian specialists to conclude the cauldron had been manufactured during the 20th century -- possibly during the Third Reich.

But determining the pot's age was not just of historical importance -- it also decided the question of ownership. Unlike most other German states, Bavaria does not have a "treasure trove law" -- a legal regulation that makes the state the proprietor of any valuable objects that are dug up. If the cauldron once belonged to the Nazi state, the complicated legal situation would mean that the Bavarian state was its sole proprietor -- otherwise it would have to share ownership with the finders.

On Feb. 1, 2002 -- only a few weeks after receiving the golden bowl -- Wamser presented his astounded colleagues with the "Celtic discovery of the century," as one audience member recalls. Speaking at Würzburg University's venerable Toscana Hall, the professor presented the experts with "a veritable fireworks display of images, a magnificent spectrum of color photos," a person who attended reports. Wasn't the Chiemsee pot a dead-ringer for the silver Gundestrup cauldron retrieved from a moor in Jutland in 1891? Was an archaeological sensation in store for Germany?

The excitement in the hall was close to the boiling point when Wamser casually dropped his punchline: The pot, he announced cheerfully, was a forgery -- manufactured from modern gold, probably by the Nazis. They had planned an "Elite NSDAP School" not far from the place where the artifact was discovered, and might have used it for bizarre consecration rites.

The guests began murmuring amongst themselves. Had SS leader Heinrich Himmler not once employed Otto Rahn, the self-proclaimed Holy Grail researcher? Rahn was thought to have searched the castle ruins of the medieval Catharist sect in southern France for the mystical chalice that was purported to have once caught the blood of Jesus on the cross. Had the Nazis perhaps wanted to instrumentalize the myth of the Holy Grail by manufacturing a copy of the Celtic Gundestrup cauldron? The lecture caused such a stir in professional circles that the press got wind of it: On Aug. 6, 2002, news of the Chiemsee cauldron first hit the headlines.

Even as ruminations on the identity of the finders, and jokes about "Hitler's bedpan" were still making the rounds in the Chiemsee area, treasure hunter Jens E. was already fervently haggling with the Bavarian Finance Ministry over the rights to the cauldron. In June of 2003, the ministry finally broke several months of silence and announced that the artifact had been sold to a "reputable private person," and that the deal had been brokered by one of the finders. To this day the identity of the purchaser -- thought to be a Munich collector -- and the purchase price, which the finders split equally with the Bavarian government, remain a secret. Only the gist of the results of the scientific analysis was made public: The cauldron neither dates to the time of the Celts, nor can it be traced to a legal estate from the Nazi era, according to the meager details released by the ministry.

But the second part of that statement appears somewhat surprising, especially given that the most concrete lead so far might very well have led to a high-ranking Nazi official. The senior director of the long-established Munich jeweler's company Theodor Heiden stated that he can clearly recall the detailed account of a former colleague. This witness claims to have been told by the company's goldsmith Alfred Notz, before the latter's death in the 1960s, about a "golden cauldron weighing more than 10 kilograms (22 lbs.), with a figurative ornament and manufactured by means of the paddle and anvil technique." The cauldron was manufactured in Heiden's workshop between 1925 and 1939, according to Notz -- at the request of the Munich company Elektrochemische Werke München. Its director, Albert Pietzsch, is said to have been a well-known customer of the goldsmith's workshop.

Pietzsch, an engineer, was in personal contact with Hitler from 1920 onward and provided Hitler with generous donations. Pietzsch's investment paid off: The industrialist, who became a member of the Nazi Party in 1927, later rose to the position of Military Economy Leader ("Wehrwirtschaftsführer") and even became the president of the Reich Chamber of Commerce ("Reichswirtschaftskammer"). Pietzsch was arrested by the Allies at the end of the war but if he did know something about the cauldron and its whereabouts, he took that knowledge with him to his grave when he died in 1957.

Following its sale by the Bavarian Finance Ministry, the artifact changed hands again in the spring of 2005. According to insiders, the bowl first reappeared in the orbit of a London letterbox company by the name of Morgan Stanwick, before being passed on to a joint-stock company of the same name in the Swiss canton of St. Gallen.

The director of Morgan Stanwick, whose headquarters is a stately villa in picturesque Jona, is the Swiss citizen Marcel W. -- an eloquent manager who is involved in the business of several companies and boasts a colorful past. Public prosecutors in Darmstadt are currently investigating W. because of dubious capital transfers. And now their Swiss colleagues have also developed an interest in W. -- because of the alleged swindle the investors from Kazakhstan fell victim to. He is said to have spun them the story of the Holy Grail and charges were filed against him in October 2006.

He is alleged to have presented them with a "participation contract" stating that the cauldron could reach the price "level of the golden funerary mask of Tutankhamen." Furthermore, an "expert on Celtic art" is quoted as allegedly "confirming a liquidable current market value of between €250 and €350 million" ($339 and $339 million) for the cauldron.

Questioned by SPIEGEL, this expert is now distancing himself from his "statement." In order to estimate the value of such an object, he says, it first needs to be proven that the object is in fact genuine. Marcel W., on the other hand, did not want to comment on the allegations.

His customers -- who have already paid "several million euros for the purchase price and lump sum payments" in order to "take possession of this piece of world cultural heritage" -- are now seriously concerned about their investment. Their fears seem to be justified. Swiss public prosecutors have, in any case, confiscated the Chiemsee cauldron. It's now just an everyday court exhibit in a fraud trial.