At Germany's International Automobile Show in Frankfurt five months ago, Volkswagen brand director Wolfgang Bernhard said that Europe's biggest automotive group is in trouble, and that unless the company can cut costs drastically and quickly, Volkswagen will have "no future." Bernhard even went so far as to say that without reform the Wolfsburg-based company would find itself in the same position as battered US giant General Motors.

"We have to move quickly -- and not crawl -- if we hope to save this company," Bernhard said. 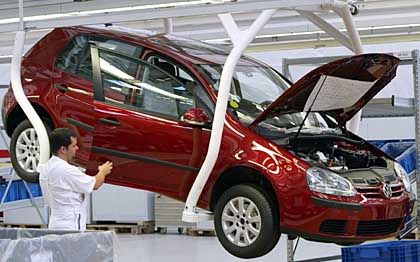 It takes 43 hours to build a Golf at Volkswagen's Wolfsburg headquarters. It takes Renault only 17 hours to assemble the Golf's main European competitor, the Mégane.

But CEO Bernd Pischetsrieder isn't exactly one for quick movements. The bearded Bavarian carefully considers every step he takes before making any decisions. And there was plenty to consider after the VW scandal involving pleasure trips for members of the company's workers' council, after Porsche's surprising bid to acquire a controlling stake in VW and after the row between the sports car manufacturer and the country's second-largest shareholder, the German state of Lower Saxony.

Add to that the fact that Pischetsrieder's contract renewal was long up in the air and, given Supervisory Board Chairman Ferdinand Piëch's dissatisfaction with the former BMW CEO's performance, the last thing Pischetsrieder wanted to do was quarrel with the company's influential workers' council.

Whereas General Motors, Ford and DaimlerChrysler announced their restructuring program some time ago, Volkswagen wasn't ready to follow suit until Friday of last week. After a meeting with the heads of the company's Supervisory Board, Pischetsrieder finally told employees the bad news: Fully one-fifth of the 100,000 jobs at Volkswagen in Germany are in jeopardy.

But no one will be laid off. Instead, employees will be encouraged to accept early retirement or other payout packages. In addition, entire sections of the company's plants in Braunschweig, Kassel and Salzgitter could be sold off to suppliers.

The markets were ecstatic. VW shares were the day's top performer, climbing by more than 9 percent, suddenly upping the value of the VW Group by €1.6 billion -- at least on paper.

The jump in the price of VW stock was the market's reaction to Pischetsrieder's announcement that the company's board had put together a sweeping restructuring program for Volkswagen AG. But what does it look like? Which parts of the company will be sold off, and to whom? Labor costs must "become competitive," said Pischetsrieder. But how? By reducing wages or by increasing working hours but not wages? If its employees are to work longer hours and build more vehicles, then the VW Group has at least one plant too many. Which one should be closed?

VW's CEO has been unable to offer many enlightening answers to these questions. For now, Pischetsrieder plans to negotiate with labor representatives. The strategy was approved by the directors of the supervisory board, which includes Piëch, Lower Saxony governor Christian Wulff, IG Metall union president Jürgen Peters and Bernd Osterloh, a member of the Presidium of the Supervisory Board.

Surprising alliances developed among these members during the course of the meeting. Wulff, a member of the conservative Christian Democratic Union (CDU), suddenly joined forces with supervisory board member Osterloh. There was a general consensus that something had to be done, and that it had to be done quickly -- although by no means with shock therapy. This was a veiled criticism of Volkswagen's brand chief, Bernhard. 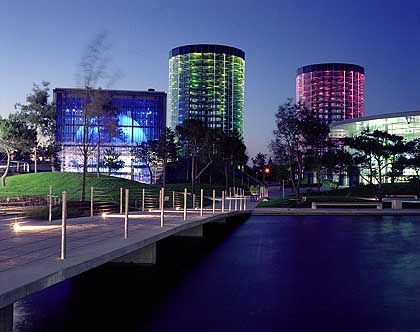 Volkswagen's "Auto City" in Wolfsburg: the company says it will cut one-fifth of its German workforce.

Bernhard had incurred the wrath of labor representatives by publicly discussing the deep-seated problem of competitiveness at the company's German plants. VW workers take 43 hours to manufacture a Golf in Wolfsburg. French automaker Renault needs only 17 hours to build its competing model, the Mégane, in Palencia, Spain. Assembling a Passat in Emden takes 50 hours, while Ford workers put together the Mondeo at the company's Genk, Belgium, plant in only 18 hours. In addition to being unproductive, the German VW plants also pay their employees some of the highest wages in the industry.

Most Volkswagen workers know how bad things look for the company. The problem is that they don't like to be told so, especially when these analyses create the impression that the workers are at fault for Volkswagen being so far behind the competition.

The truth is that management is the main culprit of VW's excessive production times. Designers of the new Golf and Passat made the vehicles too complicated and their special rear axle and door designs make the vehicles difficult to manufacture. Workers are constantly retooling and making minor adjustments. Although Bernhard is addressing these problems, they probably can't be solved until the next model is rolled out.

But Volkswagen can't afford to wait that long. Even though the brand group earned a small profit in 2005, VW could quickly find itself plunging into the loss zone if it is forced to shave off a few percentage points on its customer discounts.

Demanding more from the workforce

Pischetsrieder and Bernhard essentially agree that labor costs must be reduced, which can only be achieved if employees agree to work longer hours for the same pay. To get there, the two executives plan to sit down with labor representatives and negotiate a return to the five-day, 35-hour work week. In some areas, such as development, VW even plans to ask its workers to go back to working 40 hours a week.

According to a VW executive, the company won't be able to avoid closing an assembly plant if that happens. The factory in Brussels, where the Lupo and Golf models are produced, is considered especially at risk, because it would make sense to shift production of the cars that are currently being assembled there to the company's German plants -- which would then be utilized at closer to their capacity levels, making them more profitable. This solution would also be more amenable to German labor representatives than halting production at a German plant.

The only problem with this logic is that manufacturing in Brussels is significantly more cost-effective than it is in Wolfsburg. Why should the company build even more cars at its most expensive locations?

Pischetsrieder either has no plan for solving the dilemma, or he just hasn't presented it to employees. But this silence isn't surprising. Workers' council elections are coming up soon, and supervisory board member Osterloh, if only for tactical reasons, is likely to make a fuss about the board's cost-cutting measures. Besides, Pischetsrieder's contract renewal is by no means as certain as it seemed a few weeks ago.

Although Lower Saxony Governor Wulff and Porsche CEO Wendelin Wiedeking, who represents VW's new major shareholder Porsche on the company's supervisory board, have spoken out in favor of renewing Pischetsrieder's contract, many on the employee side doubt that Pischetsrieder is the right man for the job.

In their view, VW's CEO takes too slow and deliberate an approach to running the company. After all, they reason, the problems at plants in Emden, Wolfsburg, Braunschweig, Kassel and Salzgitter have been known for years. This is why some members of the VW workers' council are wondering whether they should consent to renewing Pischetsrieder's contract at the supervisory board meeting scheduled for early May.

Pischetsrieder seems to sense this, and in response he's behaving even more cautiously than before. And so the VW board continues to swing back and forth -- between Bernhard, who wants quick and brutal restructuring, and Pischetsrieder, who wants to tackle the unavoidable, but only if it can be done in consensus with employees.