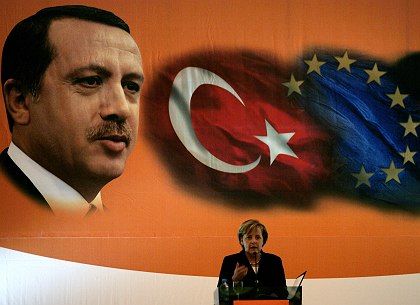 Turkey's road to the EU has always been a rocky one. But it may be getting even rockier.

At first glance, the "Sah Inn Suite" Hotel in Alanya looks no different from the average sunny resort along the Turkish Mediterranean coast: a bulky construction with a honeycomb of balconies, looking out over a generous swimming pool surrounded by parasols and lounge chairs. But, in fact, only men are allowed to take a refreshing plunge into these shimmering blue waters. Women vacationers at the Sah-Hotel swim in a strictly isolated pool for women. And what about a cold beer? Forget it. There is no alcohol here; instead, a mosque offers communion with God.

Why the piety? It's an effort by hoteliers to show their consideration for observant Muslims who want to enjoy "a vacation in keeping with religious laws." And the options for such devout holidays are growing in secular Turkey. Islamic-style swimsuits are the new rage on the beaches and around pools across the country. Nowadays, observant women venture onto the sands clad head-to-toe. Manufacturer of these chaste outfits is the Istanbul fashion firm Hasema, whose customers include the wives of leading politicians of the governing AKP, the religious-conservative Justice and Development Party.

The Cumhuriyet newspaper, which tends to be critical of the AKP, already considers Turkey to be "besieged by Islamic dress regulations." The secular press meticulously covers all violent incidents that appear to be religiously motivated: a young, bikini-clad student attacked by cloaked religious fanatics for example; or a couple assaulted for openly drinking beer during the fasting month of Ramadan. A police officer hit a girl because she was supposedly wearing a skirt that was too short. These are shocking incidents in Turkey, where laws are supposed to protect against religious paternalism, where restaurants are open during Ramadan and where headscarves are banned at universities, schools and public offices.

The state radio-control has visited Islamist broadcasters that - under names like "Radio Full Moon" or "Tulip Rose" in - rail against Christians and Jews in so-called "religious talk shows," or warn women not to shake men's hands and remind them to behave modestly.

Even political censorship, which in itself is not unheard of in Turkey, is now practiced in the name of religious modesty. Last week, for example, the ministry of education set off a storm of anger with its regulation decreeing that images of the well-known Delacroix painting "Liberty Leading the People" be removed from schoolbooks. The reason: the bare breasts of the standard-bearer in the depiction of France's 1830 July Revolution. 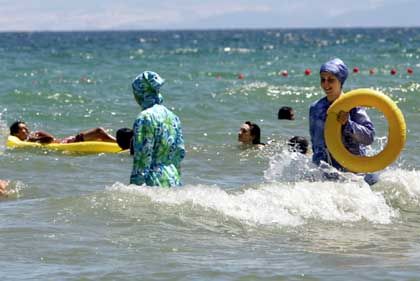 Recently, the ministry of education itself was outraged over the fact that several publishing companies had, on their own initiative, rewritten children's books that the ministry had recommended for classroom use. In the edited versions, Pinocchio, Heidi and Tom Sawyer live in an Islamic world where inhabitants wish each other a "blessed morning" or ask for food "in Allah's name." Aramis, one of the Three Musketeers, even converts to Islam.

Is Turkey really becoming more Islamic? And particularly now, after coming so far on the way towards Europe? What is undeniable is that, one year after the opening of accession talks with the EU, the atmosphere in Turkey, with its 99 percent Muslim population, is increasingly anti-European, anti-Western and more nationalistic. Only one third of Turks support membership in the European Union, according to a survey published last week in the daily Milliyet -- a dramatic change for Turks, who have been big fans of Europe for so long.

A good a week before the planned publication of the latest EU-Progress Report, the government in Ankara now fears a further worsening of the climate. If the report is, as expected, negative - sharply critical of the judiciary and the limited freedom of opinion, as well as the Turkish relation to the status of Cyprus - then Turkey is on the verge of a "massive shock," the nation's papers say.

"Europe only wants us to assimilate"

Many, even pro-Western Turks, feel that Europe has criticized them unfairly, or even repelled them. "The eastern European states were supported to an incredible degree, practically pushed into EU membership - that can't be said about Turkey," protests Cem Duna, board member of the powerful industrial association Tüsiad, which continues to advocate for EU accession. Religious Turks, on the other hand, are primarily disappointed that Europe and the EU-friendly AKP have failed to bring greater religious freedoms. "Our women who wear headscarves still are not permitted to study," complains Ali Bulaç, columnist for the Islamic newspaper Zaman. The circulation of religiously oriented publications has tripled in recent years.

When the AKP first came to power four years ago, Bulaç was still enthusiastic about Turkish accession. But then the European Court of Human Rights ruled that Turkey was justified in excluding headscarf-clad women from the classroom. Bulaç recalls angrily how his own wife was barred from their daughter's graduation ceremony because of her headscarf. Now he declares: "We have to find another way, perhaps by looking towards Asia or the Middle East. Europe only wants us to assimilate."

The influential columnist represents an emerging religious sector in Turkish society. Like their secular counterparts, many religious Turks have also profited from the economic recovery of recent years. A new religious bourgeoisie has been the result, and they now want to take advantage of their newly won affluence.

"Anyone who is rich and religious can live happily in his own world," says Islam expert Serif Mardin. "You buy Islamic designer fashion, drive an expensive car with tinted windows, get your Internet from a fellow believer, use an Islamic bank and relax at separate swimming pools." In Istanbul, where rich Turks often live in guarded luxury, there are now also separate districts for practicing Muslims. And the rise of this new, self-confident Islamic sector is tipping the hard-won balance between secular and Islam in Turkey.

Western-oriented Turks fear that their country's image is suffering. "Anyone who does not know Turkey wonders how I can live here as a modern woman - and it's great here," says Ümit Boyner, board member of the eponymous textile firm in Istanbul. This 42-year-old economist, also a kick boxer, has headed a campaign by the trade association aimed at improving Turkey's image. "We want to show that a land with an Islamic identity is completely compatible with Europe." For Boyner, Turkey is "forever a secular state."

But that is exactly what is at risk, warn the Kemalists, who see themselves as upholders of the secular teachings of Mustafa Kemal Atatürk. These profoundly worldly Turks, who used to be the nation's elite, feel threatened by the creeping Islamization of society. Specifically, they point to the fact that, under the AKP, the religious sectors of society have been reintroduced into the state bureaucracy.

Under Prime Minister Tayyip Erdogan, adherence to laws meant to protect secularism has been lax, complains Ural Akbulut, rector of the Technical University in Ankara. One already sees women with headscarves at some universities, he points out. "On my campus, no one is permitted to show up in a religious uniform," Akbulut emphasizes. "If we lift the ban on headscarves, then they would come tomorrow in a chador and the next day in a burka. In the end they would be beating up girls who wear modern dress. We have seen in Iran how fast it can happen."

Just recently, Akbulut discussed the dangers to the Republic with his friend Ilker Basbug, commander of the Turkish Army. Basbug, in a widely regarded appearance, publicly warned about a "fundamentalist threat" to Turkey that has reached "alarming dimensions." Erdogan, for his part, vehemently rejects the charge. "We want to bring Turkey to Europe," insists an Erdogan-insider, "and we are staying the course." 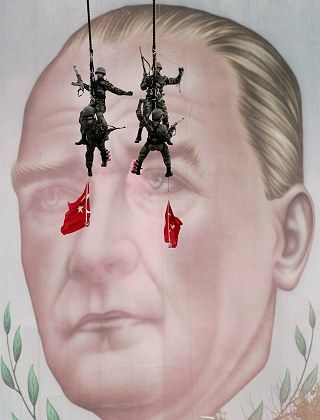 The founder of modern-day Turkey Kemal Atatürk is watching. But does he like what he sees?

The English-language paper, The New Anatolian, has also addressed the question on its Web site in a piece wondering whether Erdogan will turn Turkey into a second Iran. It's not yet that far. Turkey is becoming more conservative, says economic adviser Sinan Ülgen, "but we are not on the way to an Islamic state." Still, the AKP wants to give "more space to the religious agenda, and create a new balance between secularism and religion."

Even the President of Religious Affairs of Turkey Ali Bardakoglu, is convinced that "secularism and modernity" are "irrevocably and deeply anchored in the Turkish identity." The Religious Affairs Directorate (RAD) under Bardakoglu is one of the key positions for state control of religion. Turkey's 70,000 imams are public servants who answer to the RAD. Friday sermons are closely watched to prevent the preaching of hate. "In Turkey, we nurture a moderate and tolerant Islam," Bardakoglu emphasizes.

He himself is a liberal who is certainly not loved by many ultra-religious Muslims. The headscarf is not at all required, says this learned theologian and lawyer. "A Muslim is not determined by what he wears, by whether he drinks alcohol or wears a beard." Anyone who defines religion that way contradicts "the essence of Islam," suggests this watcher of the faith.