A young woman wearing a headscarf walks quickly toward the entrance to the Edebiat Fakültesi, or Department of Literature, of the University of Istanbul, an institution rich in tradition. It's exam season and most students are in a hurry on this clear and frosty morning. A security officer stands in the stone archway and checks IDs. A student wearing a red and black headscarf hands the guard her papers like everyone else, but then she disappears into a small structure directly behind the entrance. When she reemerges a few minutes later, she's wearing a long, dark wig instead of her headscarf.

This change in headdress is required under Turkish law, which does not tolerate, in universities, any scarves -- referred to in Turkish as Türban -- covering the head, or any long beards of the type favored by Islamist men. The wig is a compromise for devout Muslim women, because it enables them not to expose their own hair.

With these rigid measures, the country intends to protect its secular system of government against political Islam. But in doing so it also risks creating deep divisions within the country. As part of the headscarf ban, all female government employees are required to appear at work with their heads uncovered and with a "well-groomed hairstyle." Headscarves are also banned in courts and in the country's parliament.

Islamist member of parliament Merve Kavakci triggered an uproar when she appeared at her swearing-in ceremony in 1999 wearing a headscarf. As she walked into the parliament building, other members of parliament jumped up from their seats and yelled: "Get out! Get out!" Kavakci was expelled from the parliament and has never returned.

Turkey is alone in the Islamic world with its strictly secular separation of church and state. A democracy whose population is 99 percent Muslim has largely banned religion from official life -- and it has no plans to allow it back in. This stands in stark contrast to the rest of the Islamic world, where religious fundamentalists are gaining more influence.

The question of whether a women supports or opposes the headscarf goes to the innermost core of a society that is highly traditional and to a large extent rural, but also one that is proud of the achievements of its modern, secular elements.

"We want to become civilized and we are marching forward," Mustafa Kemal, or Atatürk ("father of all Turks") told farmers during his travels through the country more than 80 years ago. Atatürk was the founder of the modern Turkish state. Whenever he saw women covering their faces in his presence, he would gently reproach them, saying: "Friends, our women are intelligent. Let them show their faces to the world."

But what if they don't want to? What is the greater good -- the individual's religious freedom or the secular principle of the state? Turkey, often under pressure from the military, has decided in favor of the latter. And now, in the face of a rising tide of fundamentalism, the standard-bearers of secularism fear that if the headscarf ban were overturned the country's very foundations could crumble.

According to opinion polls, most Turks are in favor of giving women the right to wear the headscarf in universities. Turkish author Orhan Pamuk uses this social dynamite in his award-winning novel "Snow." In the novel's dramatic finale, an Islamist woman is forced to tear the headscarf from her head in front of live cameras.

"The headscarf is a symbol of a political world view that is religiously oriented and thus contradicts secularism, a fundamental principle of the Turkish republic," explains Tülin Polat, a faculty member in the Department of Education at the University of Istanbul. The country's oldest university, which then-president Kemal Atatürk reformed in 1933, feels uniquely committed to the Atatürk legacy. "We are not against religion," says Polat. "But it is unacceptable for it to be used as a political instrument. The ban is intended to prevent that from happening."

Of course, women who wear headscarves take a different view. "The scarf is our faith, and we want to be able to wear it everywhere," says Güldün Sönmez, a lawyer who wears the headscarf low enough to conceal her forehead. She also wears a black coat over her trousers to conceal the contours of her body. Because she would not be able to appear in court wearing a headscarf, Sönmez works for an Islamic charity instead of practicing law. "We don't want to have to choose between the veil or university, headscarf or career."

A compromise between the two positions is not in sight in the cultural battle over Allah's will and Atatürk's commandment. Indeed, the ban is so powerful that even the ruling conservative Islamic Justice and Development Party (AKP) has so far failed to follow through on its campaign promise to lift the headscarf ban.

Last week's ruling by Turkey's Supreme Administrative Court, which tightened headscarf rules even further, shows just how powerful secular forces are in the Turkish state. Under the new rules, teachers cannot be made principals if they wear a headscarf, even if they only do so in private. The court also thwarted the government's attempt to make it easier for graduates of imam schools to gain admittance to the country's universities.

Islamic groups see the ruling as a violation of their human rights. "The headscarf has become an icon fraught with extreme emotions," says historian Soner Cagaptay. "But it isn't time to resolve the conflict just yet."

Prime Minister Recep Tayyip Erdogan seems to agree. "We are patient because we do not wish to trigger any social unrest over this issue," he says.

He has every reason to be cautious. Erdogan, himself a graduate of an imam school, is contemplating running for president next year. But if he's elected, Erdogan is unlikely to be moving into the Cankaya Presidential Palace with his wife Emine. That's because she wears a headscarf in public, which would be seen as a provocation at state receptions. For some commentators, the thought of a Turkish first lady wearing the headscarf raises the specter of an impending "national crisis." 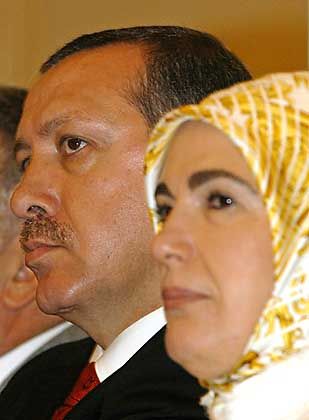 Even today, Erdogan never brings his wife to official functions. Indeed, neither his wife nor the Türban-wearing spouse of Foreign Minister and president of the Turkish parliament Abdullah Gül are invited to the state dinners given by President Ahmet Necdet Sezer.

"My wife is welcomed everywhere abroad -- just as she is," Gül occasionally grumbles to supporters. The country's headscarf ban also prevented his wife Hayrünnisa from returning to the university after raising her children. She was so outraged by the prohibition that she filed a complaint against her own country before the European Court of Human Rights. But the complaint was compromising for her husband, so she withdrew it last year.

"The issue is so sensitive that we must proceed very carefully," says Zenap Uslu, a member of parliament for the AKP. The 36-year-old, who holds a doctorate in sociology, wants to give a modern face to her party and send the message that not all women in the AKP wear the headscarf. "Turkey wants to be integrated into the world," says Uslu. She is wearing an elegant, tightly cut pants suit and her long hair is uncovered. She refuses to wear a headscarf. It's a "personal decision," she says tersely, careful not to offend the AKP's devout voters. "But women who wear the headscarf are also entitled to education," she says in support of her party's efforts to overturn the headscarf ban in universities. The AKP isn't willing to talk about a general lift of the ban at this time, knowing full well that it must be cautious not to excessively provoke the Kemalist establishment. "We need social consensus first," says Uslu.

Although a headscarf ban was imposed after the 1980 military coup, the article of clothing didn't turn into a politically contentious symbol until the mid-1990s. In 1996, an Islamist party, Necmettin Erbakan's Welfare Party, came into power for the first time in Turkey's history. Islam was on the rise throughout the country.

The shift was especially apparent at universities. "Suddenly we were seeing more and more female students wearing the headscarf," recalls Istanbul professor Polat.

In February 1997, the military, which sees itself as the upholder of secular order in Turkey, intervened once again and forced the country back onto a secular course. Military leaders ordered an end to all "Islamic subversive activities." In June, Erbakan finally resigned under pressure, and his party was banned, as was its later incarnation, the Virtue Party.

Erdogan, Mayor of Istanbul from 1994 to 1998, was one of Erbakan's political heirs. As prime minister, he has brought the country closer to Europe and, with his AKP, has offered devout Muslims an alternative. Even though the AKP invokes Allah two times in its party platform, it stands clearly behind Ataturk's secular principles.

Turkey wants to join the European Union, and Brussels has rewarded the AKP for its nod to secularism. In November, the European Court of Human Rights rejected a suit filed by a Turkish medical student and ruled that the headscarf ban in universities is legal.

Now, says Muslim Emrin Cebi, Europe is "no longer important" to her. She was forced to withdraw from a degree program in chemistry in 1997 because she had refused to remove her headscarf. "When I had to choose between the university and God, of course I chose God."

Cebi left Turkey and initially continued her studies in Malaysia, a country with a majority Muslim population. Then she went to Damascus to learn Arabic, "so that I could read the Koran in its original language." Today she works for an Islamic human rights organization in Istanbul's Fatih district, an area favored by strictly devout Muslims.

Turkey's secular forces, on the other hand, feel vindicated by the Strasbourg ruling. "The system worked," says historian Cagaptay, who is convinced that Turkey has "no potential for fundamentalism."

Nevertheless, he is in favor of eventually lifting the headscarf ban, but only when tolerance of non-practicing Muslims can be guaranteed. According to Cagaptay, no one cares "whether his neighbor prays and fasts or whether his neighbor's wife wears the headscarf" in a large part of Turkey, especially in the west and in cities. But, he adds, this is not true of the entire country. "That's why we would be solving a problem (by lifting the headscarf ban now), but we could also be creating a new one."

For headscarf wearers like Merve Kavakci, the only option available to them if they insist on wearing the hijab is to go abroad if they hope to have a career in academia or politics. The expelled member of parliament now lives in Washington, DC, where she teaches at George Washington University. There the software engineer wears her headscarf without being harassed, and her teenage daughters are also wearing headscarves. "They even wear their headscarves when they play basketball at school, and no one discriminates against them."

Kavakci hopes to return to Turkey one day, and perhaps even to the Turkish parliament -- with the headscarf. "Neither religion nor the state should be allowed to intervene in the affairs of the other."

She still pins her hopes on the Turkish prime minister. "Once Erdogan is president, the ban will be dropped," she says.