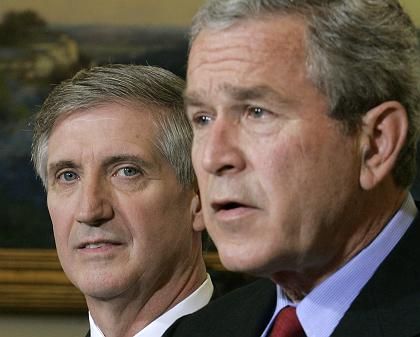 The last family photo is a hasty affair. Five minutes is all the time the US cabinet takes to pose in the White House's Rose Garden. President George W. Bush makes a few banal remarks -- they're almost drowned out by birdsong. But instead of facing questions from the journalists as expected, Defense Secretary Donald Rumsfeld quickly disappears back into the Oval Office. No time for introspection.

The farewell ceremony for White House Chief of Staff Andy Card and Secretary of the Interior Gale Norton yesterday was unsentimental. True, Card struggled with tears during his official statement of resignation in the morning. But apart from that it was business as usual.

That was probably deliberate. The most important re-organization of Bush's cabinet since his re-election in November 2004 was apparently meant to appear as a matter of routine, a simple personnel issue. And yet the background is anything but undramatic.

A Series of Mishaps

Card's resignation is a gesture of peace -- an olive branch Bush is handing to his party. For weeks Republicans have been annoyed over a series of mishaps in the White House: the failure to deal with Hurricane Katrina, the crisis of faith in Iraq, the debate on Washington's surveillance program, the botched Dubai deal, Vice President Dick Cheney's hunting drama, the decline of Bush's poll ratings to Nixonian levels -- etcetera, etcetera.

Card offered himself as a sacrificial lamb. "I take responsibility for everything that has not happened well," he told the New York Times last week. But it's not that simple. By promoting Budget Director Josh Bolten to Chief of Staff, Bush is just replacing one insider with another. Bolten is hardly the "fresh blood" Republicans have been demanding for their party's circle of power, which has otherwise remained the same since 2001. This is all the more true since the man really in control -- Bush's mastermind Karl Rove -- will remain in the West Wing.

Is it a purely cosmetic change, then? The answer is yes, unless Card's resignation is only the beginning of more extensive spring cleaning in the White House. One option currently being debated in Bush's party is that of hiring a new super-minister, without a portfolio -- "a pitcher who could save the losing baseball team in the last inning," as one observer has said. Many Republicans are hoping for such a radical cure, because they are already seeing things go badly for them at the Congressional elections in November. Rove's stated goal of freezing Capitol Hill in conservative permafrost is long outdated. The Republicans are suddenly afraid of losing their majority in both chambers of Congress.

Cleverly drawn district borders and a system that puts candidates already in office at an advantage may make that a difficult goal to achieve -- but not an impossible one, and certainly not when it comes to the Senate. Historically, mid-term elections held during a president's second term tend be a winner for the opposition party. The question is: how much of a winner?

A Referendum Against Bush?

The greatest obstacle the Democrats face is -- the Democrats. They're hoping to turn 2006 into a referendum against Bush, much as the Republicans succeeded in 1994 against Bill Clinton.

"Two thirds of Americans think the country is moving in the wrong direction," says the young senator and star of the Democrat party, Barack Obama -- immediately adding a self-critical observation: "But they're not so sure the Democrats can move it in the right direction." That's just what John Kerry found out during the 2004 election. "We're underselling ourselves," sighs Phil Bredesen, the governor of Tennessee. "The country is open to alternatives, but not to all this criticism."

Even the greatest scandal since Watergate, the corruption affair surrounding lobbyist Jack Abramoff and his mostly Republican associates, has not helped the Democrats present themselves as a "clean" party. Instead, the Republicans succeeded in presenting the scandal as a "bipartisan" affair, thanks to a few bad apples in the Democrat camp.

Torn between a left current associated with Howard Dean, champion of the party's liberal traditions, and centrists à la Hilary Clinton, the Democrats are bumbling along without a leader. Clinton continues to divide opinion, notwithstanding all the attempts to polish her image. Kerry has been branded a loser. Ted Kennedy is too controversial, House Minority Leader Nancy Pelosi too bland. Perhaps the most interesting candidate is someone everyone had written off, and who is now returning from nowhere: Al Gore.

Kerry says he's confident his party will find its own voice in the coming months. "Our megaphone is just not as large as their megaphone."