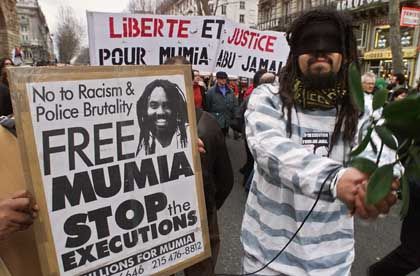 Some 2,000 people demonstrated outside the US embassy in Paris in support of Mumia Abu-Jamal in 2000.

The cause of the latest bout of trans-Atlantic tension between the United States and France lies in a single-lane, freshly paved street between an empty low-income housing building and a warehouse slated for demolition.

It's in an area of crumbling facades, construction cranes and lots covered in wild plant growth -- a typical example of a neighborhood in need of urban renewal in the outlying Paris suburb of Saint-Denis. Its 95,000 residents are mosly black and arab immigrants for Africa. The street signs at both ends of a one-way street say it all: "Rue Mumia Abu-Jamal."

The small street -- much like its namesake -- became a cause célèbre when Mayor Didier Paillard, 52, unveiled the blue and white enameled signs in a ceremony in late April. But the media aftershock came, not in France, but in the US state of Pennsylvania 6,000 kilometers (3,730 miles) away.

It was there that the newly named Rue Mumia Abu-Jamal produced outright indignation, triggered diplomatic protests and added new ammunition to an ongoing tense relationship between Paris and Washington. For Pennsylvania's Republican Senator Rick Santorum, known for his crystal-clear notions of good and evil, right and wrong, Rue Mumia Abu-Jamal was nothing short of a declaration of war. Santorum condemned Mayor Paillard's action as a "monumental insult" and demanded that the French government step in.

Abu-Jamal, 52, is a black American who calls himself a journalist. His real name is Wesley Cook, and at 14 he was already the deputy spokesman in Philadelphia for the radical arm of the black power group the Black Panthers. In December 1981, Cook allegedly murdered white police officer Daniel Faulkner, and he was sentenced to death after a witness identified him as the killer.

It's a case straight out of the jungle of American jurisprudence. Although evidence of his guilt appears overwhelming to many, others are convinced he didn't get a fair trial. In December 2001, a court finally overturned the death penalty against Cook, who has called himself Abu-Jamal since converting to Islam, but not his conviction. But when a federal judge refused to reopen the case, prosecutors demanded that the sentence be carried out after all. As a result, Abu-Jamal continues to face the possibility of execution.

With so many issues at stake -- race, the death penalty, a faulty trial, America -- it comes as no surprise that the case has attracted so much attention at home and abroad. Some US civil rights activists, opponents of globalization and old-school leftists revere Abu-Jamal as a "voice of the voiceless" and see his case as evidence of the excesses of a racist judicial system.

The case only turned into a trans-Atlantic affair when Bertrand Delanoë, the socialist mayor of Paris, made Abu-Jamal an honorary citizen of his city, an honor bestowed on only two other people in the past, Pablo Picasso and Marie Curie. "Paris and the Cop Killer, Now That Fits," wrote the tabloid daily The New York Post, suggesting that Americans refrain from buying "Bordeaux and French cheese."

Residents of Saint-Denis are taking the most recent outbreak of Francophobia in stride. The naming of the street was not intended as an anti-American provocation, communist Mayor Paillard insists. But, he adds, his voice firm, backing down because of Washington's demands is out of the question.

The local residents, including Madame Gutierrez lives on Rue Mumia Abu-Jamal, seem unimpressed by all the political hubbub. She isn't upset, just pragmatic. "Now at least the Americans know where our community is," she says.