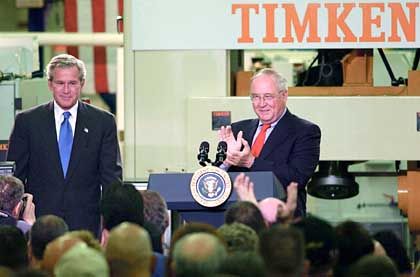 Bush and Timken together in Ohio in 2003 -- the year Timken's company raked in $92.7 million from protective tariffs.

As Washington's new ambassador to Germany, William Timken, Jr. will face, among other things, the task of patching up damaged relations between the two countries. But there's one small problem with this picture. The multimillionaire who US President George W. Bush nominated to the position two weeks ago also happens to be Chairman of the Board of Directors of The Timken Company, an Ohio-based firm that claims to be the biggest manufacturer of roller bearings in the world. And ever since the 66-year-old Timken, a major donor to the Republican Party and decorated with the honorary title of "Super Ranger," (reserved for those who contribute more than $300,000) has been slated to take over the position in Berlin, his company's questionable business practices have suddenly become taboo among German politicians and industry lobbyists.

Here are some good examples: Last Tuesday, the usually outspoken Bavarian Minister of Economic Affairs Otto Wiesheu said he was not the right person to talk to about the Timken Company. On Wednesday, Randolf Rodenstock, the head of the Bavarian Business Association, also declined to comment on the matter. Even Germany's federal Minister of Economics and Labor, Social Democrat Wolfgang Clement, has opted to discreetly downplay the issue.

In other words, no one wants to talk about the fact that the Bavarian roller bearing industry is suffering because it's being forced to pay protective tariffs for products it exports to the United States as a result of charges of price dumping. To make matters worse, the Bush administration is funnelling the proceeds directly to the Bavarians' US competitors, primarily Timken. In response to a complaint filed by the European Union and other states in January 2003, the World Trade Organization, or WTO, ruled that this practice is clearly illegal. Yet, no one dares speak out against it -- or against America's newest ambassador.

Jürgen Geissinger, CEO of the Schaeffler Group in the northern Bavarian town of Herzogenaurach and also president of the Federation of European Bearing Manufacturers Associations, complains: "Timken, one of the biggest beneficiaries of a trade policy that violates the WTO ruling, has been named ambassador to a country whose businesses suffer as a result of this policy."

Schaeffler's holdings include roller bearing manufacturers FAG Kugelfischer and INA which are responsible for about 26,000 German jobs. According to Kugelfischer, the company has already paid more than $35 million in tariffs, with most of the money going into the coffers of Timken's company. And, according to Geissinger, the proceeds from the tariffs could even enable the Americans to sell their products at rock-bottom prices on the world market, "which would not only deprive us of revenues, but would also jeopardize German jobs on a massive scale."

To this day, hardly any other US company has insisted so steadfastly that the United States should continue to ignore the WTO's 2003 decision. More importantly, no other US company has profited as much from America's anticompetitive protective tariffs since 2001 as Timken (including its subsidiary, the Torrington Company, which Timken acquired in 2003). But the companies that are paying the lion's share of these tariffs include German industrial bearing manufacturers -- and at $70 million in tariffs, the Germans are only in second place behind the Japanese.

Merely by filing the appropriate forms, Timken managed to cash in on $52.7 million from the US customs jackpot in 2004, twice as much the second-largest beneficiary of the tariffs. Timken's take was even bigger in 2003 -- $92.7 million, or five times as much as the number two company on the receiving end. Even President Bush believes that there is something wrong with this practice of milking the competition despite the WTO decision. He attempted -- albeit unsuccessfully -- to overturn the 2000 legal basis for the tariffs, known as the "Byrd Amendment."

Nevertheless, there is no indication that German politicians will seize upon Timken's appointment as an opportunity to apply more pressure. Even Free Democrat (FDP) Rainer Brüderle, the head of the Committee on Economic and Monetary Affairs in the German parliament (Bundestag) and normally a staunch supporter of concepts like "open markets," "free trade" and "fair competition," has managed to come up with only lukewarm words of protest. "Following the Timken appointment," he said, the United States ought to "distance itself from the policies of the Byrd Amendment."

The official stance taken by the Social Democratic Party (SPD) has been just as tame. Klaus Brandner, economic and labor policy spokesman of the SPD parliamentary group, said that he hopes Timken will become more sympathetic to the European position once he arrives in Germany. But that might not happen until early next year. And, already, the ambassador post has been vacant for five months. Still, perhaps there is something to Brandner's wishful thinking. After all, it was Timken's greatest wish to become US ambassador to the country of his ancestors. Although Timken speaks no German, his great-grandfather, Henry Timken, was born here and was seven years old when he left Bremen for America in 1838.

But the EU has no intention of relying on such wishy-washy sentimentalism. Instead, it decided to fight back in May of this year, when it began imposing special tariffs on a wide range of US goods. The Wall Street Journal promptly pointed out that as result of the EU tariffs, many US companies will now suffer while a few others continue to pad their wallets.

The Timken Company has refused to comment on its Byrd Amendment profits. Timken, for his part, once made it clear just how unimpressed he is by attacks when he quoted a legendary US general: "The enemy is in front of us, behind us and next to us -- this time he won't get away."