Ricardo M. was 11 years old when he killed a person for the first time. It was night, and about 20 boys had gathered at the highest point in the favela. With hunting rifles and assault weapons slung over their shoulders and handguns stuck into the waistbands of their Bermuda shorts, it looked as if a war were about to break out in this poverty-stricken neighborhood on the outskirts of Rio de Janeiro. After an evening spent snorting cocaine, the boys were high and completely uninhibited.

A whimpering teenager, his face disfigured from the beating he had just taken, knelt at their feet. He had been tortured with cigarettes and blades. For the boys, he was nothing but what they called an "X9" -- a traitor who had informed on a gang member. The penalty was death.

The gang leader pressed a .38 caliber revolver into Ricardo's hand. Holding the heavy weapon with both hands, Ricardo held it against the offender's head and pulled the trigger. The other boys applauded and slapped Ricardo on the back. He had passed the initiation rite for membership in "Terceiro Comando," Rio's second-largest criminal organization. From then on he would be a "soldier" of the Mafia. Together with the other boys, Ricardo dragged the dead boy into a ditch, poured gasoline on the body and lit a match. "I felt nothing," he says today. "I was too high."

Children in Rio are waging a brutal war only a few kilometers from Brazil's famous beaches at Copacabana and Ipanema. A generation of teenagers is killing or being killed at the behest of the drug gangs that control about 300 of the city's 700 favelas. Murder is now the most common cause of death among Brazilian youth. Forty percent of all murder victims are between 15 and 25 years old.

In January, for example, residents of a north Rio neighborhood found a car full of seven mutilated young bodies. The police believe they were victims of a feud between rival gangs. At least 20 young men -- many of them teenagers -- have died in Rio's drug wars in the last six weeks alone. Other Latin American countries face similar problems. In El Salvador, Honduras and Guatemala, adolescents are dying every day in battles between warring "Maras," or youth gangs.

From Caracas to Sao Paulo, Mexico City to Buenos Aires, Central and South America are experiencing a dramatic upswing in youth crime. "The drug mafia recruits children as young as nine or 10," says Guaraci de Campos Viana, the chief justice of Rio de Janeiro's juvenile court. "Children have no sense of danger. Being a member of a drug gang gives them a sort of adrenaline rush."

Ricardo began working for drug dealers when he was 10, selling small envelopes of cocaine on the street. At 11 he was promoted to the job of "radio," which involves sitting on roofs, keeping an eye out for unfamiliar faces and using a walkie-talkie to report their approach. He began snorting cocaine to stay awake. His mother, a maid, lost control over her son long ago. He doesn't know who his father is.

For Ricardo, part of becoming a "soldier" meant swearing to abide by the unwritten law of the Terceiro Comando: never steal from anyone in the favela and never take away a friend's woman. His promotion came with a hefty pay increase. He was now earning 250 Real (€90) a day. While other children his age attended school, Ricardo lived the life of a favela prince. He treated himself to multiple girlfriends, bought them clothes and presents, and was respected. "My life revolved around sex, drugs and weapons," he says. Eventually he would probably have become a "Gerente," or head of a drug selling operation, if he hadn't been arrested after someone tipped off the police. Ricardo is now 17 and an inmate at the "Escola João Luiz Alves," a juvenile correctional facility. His face is covered with acne and his arms with tattoos. He remains loyal to his gang, even in prison. 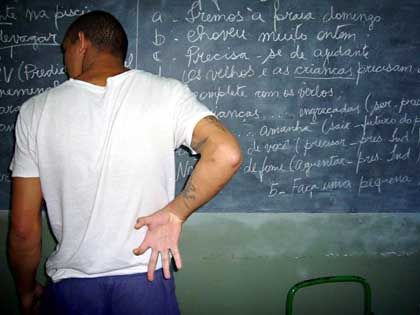 Ricardo M. was just 11 when he committed his first murder.

Gangs, in fact, are in control of most Brazilian prisons. Last year Marcos Marcola, the leader of the PCC criminal gang, used a mobile phone to direct his gang's attacks on buses, banks and police stations in Sao Paulo -- from his prison cell. More than 100 people died, and all because Marcola refused to be transferred to a high-security prison.

In December the jailed bosses of "Comando Vermelho" (Red Commando) ordered similar attacks in Rio, costing 20 people their lives. Seven were burned alive when the gangsters refused to allow their victims to get off buses to which they had set fire. Brazilian President Luiz Inácio Lula da Silva referred to the incidents as acts of "terrorism."

The drug mafia began resorting to such violence after it became a target itself. Private militias are trying to expel the drug dealers from many slums. The illegal militias, which enjoy excellent relations with the police and force residents to pay them protection money, already control 97 of Rio's favelas.

The government is almost completely absent from most slums and police presence is rare. The drug gangs are often so well armed that only heavily armed special units dare to enter the favelas. Police officers, many in the drug dealers' pay, look the other way when the gangs go to war, uninterested in endangering their own illegal earnings from the cocaine trade. Corruption reaches right to the top ranks of law enforcement. The public prosecutor's office is currently investigating Rio's former police chief for taking bribes from the mafia.

President Lula, for his part, has had enough and has now brought in the military in an attempt to tackle the problem. Lawmakers are also considering amending the law so that even 16-year-olds can be sentenced to lengthy prison terms.

Just in the last three weeks, Brazilian youth perpetrated three robberies and murders. Brazilians were particularly shocked by the death of a six-year-old boy, João Hélio Fernandes. His mother was attacked when she stopped her car at a street corner. When she was unable to unbuckle her son's seatbelt, the attackers drove off, dragging the boy along as he hung like a puppet from the car -- for seven kilometers. When the boy's body was found, his head, knees and fingers were gone. One of the attackers was only 16.

The drug mafia takes advantage of the fact that minors cannot be given adult prison sentences. Comando Vermelho prefers to use children and adolescents to commit its robberies and murders, because they have so few inhibitions. Ricardo M. describes how he sawed off the arms and legs of prisoners while they were still alive. "We had a special table that we used to torture traitors." If they are apprehended, the underage gang members spend only a few months in prison and usually return to their gangs shortly after being released.

Girls are also involved in the drug mafia. Fabiana S., 15, an exceptionally pretty and intelligent girl, became the head of a drug selling operation at the age of 12. Her father watches over parked cars for a pittance and her mother works as a maid. The family lives in a favela in Niterói, a Rio suburb.

Fabiana was expelled from school when she was 11. "I was too rebellious," she says. When the local head of Comando Vermelho offered her a job, she accepted. Her first job was to weigh and package cocaine into small envelopes, which are sold for the equivalent of two, four or eight euros. Her customers were workers from a nearby shipyard.

The gang leaders quickly recognized their young manager's commercial skills and gave her the job of keeping records of the bribes they paid to the police. She was soon in charge of buying drugs. At 14 Fabiana was earning the equivalent of €800 a month, a princely sum in the favelas. She bought a house and went shopping with her sister twice a week. She offered her parents money, but they refused. "My mother says there is blood on the bills," she says.

Naturally, she knew about the secret cemetery at the top of the hill, where drug dealers buried their victims. "Sometimes the bodies were exposed when it rained." Most of the dead were young girls. "Many of them would go to bed with the dealers for a pinch of cocaine," she says. "Later on they would have affairs with police officers and become traitors."

Fabiana was also fond of snorting cocaine. She was careful to remain faithful to her boyfriend, partly for her own safety. "He was a drug boss. There could have been problems." The couple would spend their evenings stealing cars at gunpoint and racing around Rio. The police pursued and arrested them during one of these joy rides.

Fabiana now plans to build a new life. "Seven of my friends were shot to death, I don't want that to happen to me," she says. She plans to go back to school, learn English and attend college. But former child gangsters have few prospects on the job market.

Ricardo S., the soldier from the Terceiro Comando gang, will also be released soon. What does he plan to do? "I'll look for a job," he says. And if he doesn't find one? Ricardo grins. "The drug dealers will always have work for me."