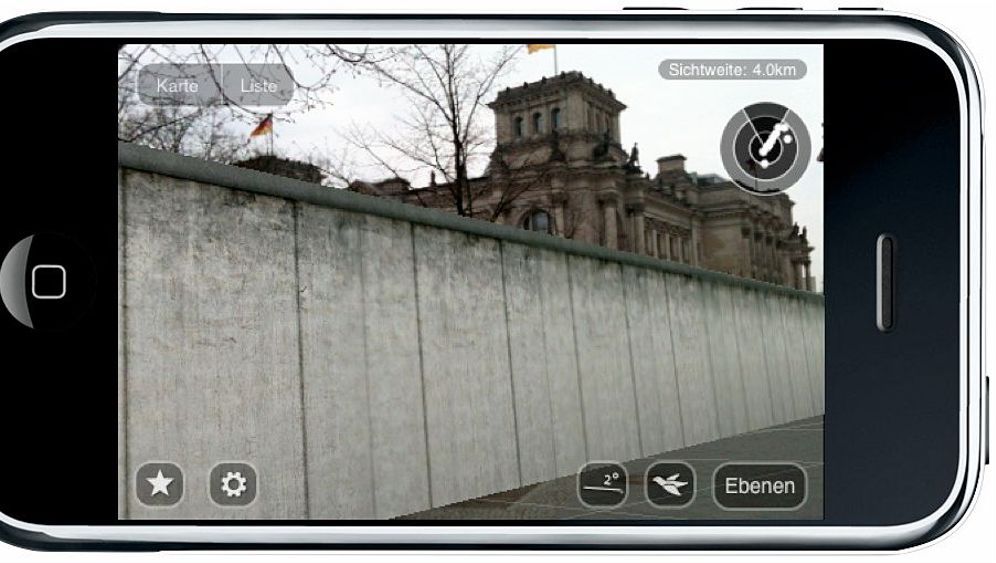 Marc Gardeya is possibly the only person in the world whose life has been more affected by the resurrection of the Berlin Wall than its fall. The mathematician actually managed to rebuild the Cold War symbol. In fact, the resurrected Berlin Wall is something of a business card for him. When he explains his work to people, he very often does so by pulling his mobile phone out of the pocket of his jeans.

Gardeya stands next to conference tables and flip charts, a 36-year-old with neon green shoe laces in his sneakers and too much of a tan to be mistaken for a nerd. He holds a white smartphone in his hand. On the phone's screen one can see the conference tables and the flip charts as well, but the virtual Berlin Wall is running right through the middle of the room -- in its original dimensions. If one moves closer while holding the phone up, the Wall gets larger. If one moves away, the Wall gets smaller, just as it would in real life.

Gardeya released his Berlin Wall for the Layar augmented reality browser, which is available for Apple's iPhone and smartphones equipped with Google's Android operating system, in April. The software uses images and GPS satellite data in order to determine a person's location and to provide information or render images of the portions of the Berlin Wall that used to stand at that location. The technology, known as "augmented reality," or AR, combines the real with the virtual.

Only three years ago, American novelist William Gibson, famous for his futurist tomes, published "Spook Country." One of the characters in the novel is an artist who erects virtual memorials of historical events at the places where they actually happened. An example is the virtual body of deceased American actor River Phoenix, which appears at the place where he died. In the book this is described as "locative art." In order to see the fictional memorials, viewers need a helmet that is connected to the Internet. Gardeya's Berlin Wall is similar, only no helmut is required.

Gardeya has never read any of Gibson's books, but through his work he is -- wittingly or unwittingly -- applying the author's fantasy to reality. And that's part of what is special about augmented reality -- the technology puts science fiction authors and computer game developers on the same playing field as engineers and software programmers.

'The Most Exciting Thing'

In August 2009, a man with a briefcase and contagious enthusiasm stood behind a wooden pulpit on a stage in Amsterdam and declared, loudly and with great certainty: "It's the most exciting thing happening!" Bruce Sterling, a science fiction writer and Wired blogger, was speaking at an event in the Dutch city in honor of the first AR browser for mobile phones. Speaking as if in front of a high school graduation, the author said: "If you forget your own spiritual forefathers, then you will be forgotten by your decendents in the same way one day."

The forefathers in this case include engineers who worked on helmets with data transfer capability in the 1960s and on data displays and graphic interfaces to help with complicated technical jobs in the 1990s. But with the birth of smartphones that include cameras, GPS, compasses, accelerometers and powerful chips to process all that data, that technology is now being rolled out for the mass market and there is no longer any need for cumbersome headsets or other equipment.

The chances that people will adopt it are quite high, too. After all, the basic principles behind it are already well known to us through science fiction. The "holodeck" on "Star Trek" is a room in which machines simulate reality so crew members can recreate past or future situations. And Arnold Schwarzenegger helped popularize augmented reality long before he became the 38th governor of California. In 1984 he played the role of the Terminator in the film of the same name. In it, he is a cyborg from the future hunting Sarah Connor, a human woman of the present. When the Terminator's robot-camera-eyes focus on a certain view in the film, data floods the screen -- the robot has the ability to bring up additional information about what it is looking at. In other words, to augment its reality.

When we look back we may well think that our cultural history is actually like some sort of beta phase for our new augmented reality. Objects from the past will be beamed into our world as though they were the products of time travel -- just like Gardeya's Berlin Wall.

As Sterling spoke in Amsterdam in 2009, Gardeya sat in the audience, listening attentively. The company that had developed the browser for the smartphones had already given 50 programmers a test version so they could develop new applications for it. As one of those developers, Gardeya created an application to visualize the accumulation of IT companies in the Stuttgart region. The businesses are depicted as points in the sky above the city -- a data cloud between the actual clouds, so to speak. After Sterling's speech the first of the applications were shown on a screen. Almost a year later, Gardeya says that Sterling's talk was one of the most inspiring moments in his life: A rite of passage for an industry in development.

Gardeya has since become a busy man. His test application worked so well that he subsequently began to work for Amsterdam-based Layar. After a little over a month, he returned to Stuttgart to work on his own business, Project Hoppala, whose calling card would be the resurrection of the Berlin Wall.

'I Always Dreamed of This'

Rather than relying on business reports, one can best observe the growth of the AR industry by looking at Gardeya's meeting schedule. There are congresses and conferences going on somewhere almost constantly -- and very often Gardeya is one of the people speaking at them. "I always dreamed of this, to tell a story about something -- and people want to hear it," the technology evangelist says.

For Gardeya, augmented reality is a revelation. When he isn't busy preaching the technology, Gardeya's real job involves coming up with AR applications for his clients, who include the German Yellow Pages and the Media and Film Society Baden-Württemberg (MFG), which supports screen productions in that state as well as funding non-profit projects in media, film and information technology.

Last year the industry had revenues of around €5 million (around $6 million), but experts believe it will become a $350 million industry by 2014. Gardeya says he always thought that AR would be big, a new mass medium. Recently, British scientist Tim Berners-Lee, the creator of the World Wide Web, mentioned Gardeya's version of the Berlin Wall. He also said he couldn't predict how important augmented reality would become in the future. Too big for him to guess, anyway. And too big for him to know where his place within the industry would be.

Despite growing success, critics say the technology is not without its ethical problems. Advocates of data privacy, for example, are already worried about AR applications that might, for instance, allow one to see the Facebook accounts of strangers walking down the street. One Layar-based app, TweepsAround, shows Twitter tweets and account information based on the GPS coordinates of the person tweeting.

Editor's note: The creator of TweepsAround wrote to SPIEGEL ONLINE International on Wednesday and noted, correctly, that his application only provides geographical information about users if they have enabled geo-tagging in their Twitter account settings. The feature is turned off in Twitter's default settings and must be activated by users.
Mehr lesen über
Technology Science
Verwandte Artikel