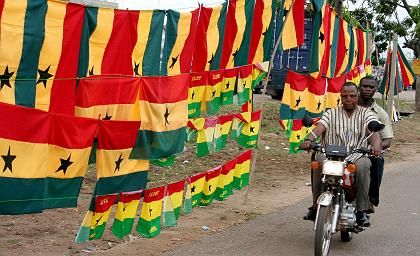 Ghana is in World Cup fever with the capital Accra bedecked in flags.

Africans see Ghana as a progressive country. Its democratic institutions are stable, and in recent years economic growth has averaged 5 percent. President John Kufuor, who was re-elected in late 2004, has persevered with his reform program. As the national debt steadily shrinks, government companies are being privatized and foreign investors courted. Rich in natural resources such as gold and cocoa, the country has benefited from crises in neighboring countries. Companies from Togo and the Ivory Coast are relocating to Ghana, and trade with neighboring Burkina Faso is increasingly channeled through the port of Tema just outside Accra, the capital. Promising strides have been made in the war on poverty. Although the population is growing rapidly, the country hopes to halve its poverty rate over the next 10 years; currently one in three Ghanaians lives at or under the subsistence level. Worries persist that the country might be drawn into the crises and civil wars that rock the region.

Like most African countries, Ghana is a footballing nation. Children, teenagers, adults, men and women alike all play soccer. They play anywhere: on the streets, in the fields, and in the dirt patches between the cows and goats. And they are happy to kick anything that can somehow serve as a ball. Many dream of one day running out in front of 50,000 spectators for the Accra Hearts of Oak or Kumasi Asante Kotoko, the country's two top clubs. Players there earn €250 a month, as much as a harvest worker receives in a whole year on the cocoa plantations. The professional sport has also been booming since the country qualified for Germany. Clubs are finding sponsors; training centers are being built. But with heptathlete Margaret Simpson winning bronze at the World Athletic Championships in Helsinki - the first medal ever won by a Ghanaian track and field athlete - the national soccer team will be hard put to avoid being branded as failures. The tournament in Germany will mark the country's debut at the World Cup finals. But with its team making an early exit at the recent Africa Cup, Ghana will be far from the best representative of its continent at the tournament.

Following the retirement of Ghana's recent generation of heroes surrounding Anthony Yeboah and Abedi Pele, its players are now pinning their hopes on a compact formation and good teamwork. Led by the outstanding Michael Essien, who numbers among the world's best defensive midfielders and plays for Chelsea, the Black Stars only conceded four goals in their 10 qualifying games for this year's World Cup. Playing in the midfield alongside Essien are Fenerbahce's mazy dribbler Stephen Appiah and Sulley Ali Muntari of Udinese. Today, almost all of the country's top players pick up their salaries abroad.

Roman Abramovich, Chelsea's owner, shelled out €38 million to bring Essien to England from Olympique Lyon. That may be small change to the oligarch from Russia, but the transfer turned the young man from Accra into Africa's most expensive player. Essien is versatile, dynamic and a tenacious tackler. He is frequently compared to Germany's Michael Ballack because of his attacking style. He scored five goals in the Champions League last year alone, but - citing an ankle injury - sat out the Africa Cup in Egypt. Not everyone in his homeland was convinced.

A 59-year-old Serb, Dujkovic has been coaching the national team since 2004. He had previously played between the posts for Red Star Belgrade, where he started his managerial career as assistant coach. He went on to train the teams of Venezuela, Burma and Rwanda. At the very start of his tenure in Ghana, he refused to nominate Sammy Kuffour because the former Bayern Munich defender had failed to attend a training camp. Kuffour, the country's favorite sporting son, had previously captained the national team. Dujkovic faced heavy criticism, but his emphasis on discipline and team spirit quickly produced results. After his appointment, the team played out one draw in the qualifiers - and then proceeded to take maximum points from the remaining fixtures. At the end of the day, Ghana held a five-point advantage at the head of its group. Most recently, Dujkovic has had his team playing a surprisingly defensive formation - arguably one reason for the setback in Egypt.