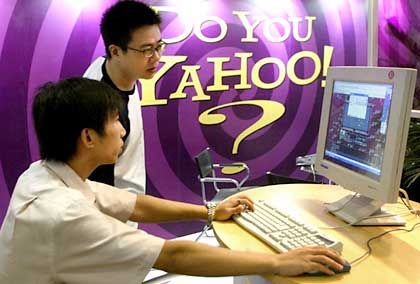 The last time Gao Qinsheng saw her son, she hardly recognized him. She remembered Shi Tao, 37, as a large and powerful man. But all she saw now was "skin and bones." Gao told prison officials that her son needed a doctor.

Instead he was transferred to a re-education camp about a week ago. The camp, officially dubbed a "machine factory," sits on a small island in Dongting Lake in the southern province of Hunan, where Shi Tao shares a cell with at least 30 prisoners. If things go poorly for Shi Tao, this could be his living arrangement for the next ten years.

His crime? Shi Tao, a journalist with financial daily Dangdai Shang Bao, electronically forwarded an internal Communist Party directive concerning the 15th anniversary of the Tiananmen Square massacre to a "foreign hostile element." The document contained little more than a general warning about the return of certain dissidents. But it was precisely this word -- dissident -- that was probably picked up by the state security apparatus' filter programs, focusing the attention of one of the country's 40,000 internet censors on Shi Tao.

But because the journalist had taken the precaution of sending his e-mails from an anonymous address, the Chinese authorities had to turn to Yahoo for help. And the American internet company, through which Shi Tao had sent his e-mails, apparently had no qualms helping out the Chinese. According to the organization Reporters without Borders, Shi Tao could never have been arrested without the servile Americans. When he was sentenced in April, the People's Court expressly referred to information "provided" by Yahoo: the journalist's personal account and the exact transmission time of the incriminating message.

The case became a PR disaster for Yahoo. Only after it was reported in various newspapers did company spokeswoman Mary Osako issue a terse statement to the effect that each individual Yahoo office must operate within the framework of local laws and "customs." Customs? Does that mean child labor? A little light torture? What exactly does the word "customs" mean to Yahoo?

Osako also told SPIEGEL that the company, of course, abides by its own "privacy policy." But that policy is full of holes. As far back as 2002, Yahoo voluntarily signed a document ominously titled "Commitment to Self-Discipline for the Chinese Internet Industry."

Until the Shi Tao case, this meant helping out with censorship as well as blocking access to certain internet sites to China's approximately 100 million internet users. Google has also complied with Chinese policy, and Microsoft's MSN was even willing to remove search terms like "democracy" and "human rights" from its portal. According to MSN's model of cultural relativism, this kind of language is simply "forbidden speech" in China.

But, says Reporters without Borders, Yahoo's latest move has essentially relegated it to the role of "police informant." The US company, which had just acquired 40 percent of China's biggest e-commerce company, Alibaba.com, for $1 billion, had apparently taken this approach in an effort not to make waves in what it viewed as the prevailing political landscape.

In taking this approach, though, American companies contradict the doctrine that opening up markets will encourage political liberalization.

Journalist Ethan Gutmann has addressed this issue for years. Network provider Cisco, which has operated in China since the mid-1990s, is one of the usual suspects in Gutmann's articles. "We firmly believe," says company spokesman Ron Piovesan, "that the internet has made countries all over the world more open."

But Chinese citizens haven't exactly been able to count on Cisco's help in this respect. Indeed, the company has done exactly the opposite, says Gutmann, reconfiguring its top-selling firewalls and routers to meet the Chinese government's censorship needs. In a study on the internet filtering system in China, the "OpenNet Initiative," a research pool of three North American universities, writes that Cisco products are especially well-suited to helping out the government's monitoring system.

The devices cost about $20,000, and Gutmann says that Cisco already sold "several thousand" in 2002. Cisco spokesman Piovesan claims that the company merely sells network equipment "and is not involved in government censorship efforts." It's an excuse that sounds a bit like that of the weapons dealer who steadfastly denies having anything to do with war.

In 2000, concerned politicians started to raise red flags about the role of technology transfer in censorship. To address these problems, they established the US-China Economic and Security Review. At one of the Commission's meetings, someone asked why trading in censorship-ready products isn't illegal. The response? "That's a good question." The issue was quickly forgotten, and nothing has changed since then.