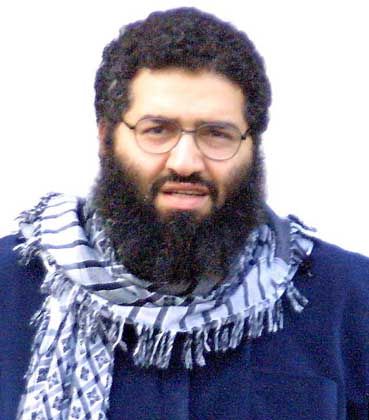 Mohammed Haydar Zammar, a Syrian-born German citizen, was abducted by the CIA with the aid of German authorities.

The handcuffed prisoner's appearance before the court in Damascus gave him little reason for hope. The chief judge listened silently to the prosecution's case against Mohammed Haydar Zammar, a 46-year-old, Syrian-born German citizen -- and a personal friend of the Sept. 11, 2001 hijackers.

The court is decked out like a living room, with a yellow-green carpet on the floor and a chandelier hanging from the ceiling. But it's rarely a comfortable place. Those facing charges here are considered public enemies and can hardly expect mercy.

The German government is closely watching the development of the trial. It will have to defend itself in a parliamentary probe in Berlin against accusations that German security authorities are partly responsible for the CIA's illegal abduction of Zammar, who has been sitting in a Syrian prison for the last five years.

Evidence for the truth of the accusations has now surfaced in the form of previously-unpublished classified documents from the files of the CIA and the FBI. The papers show that it was detailed information from Germany which put the American pursuers on Zammar's scent. Without Berlin's help, it would not have been possible to kidnap Zammar, a supporter of bin Laden. His abduction has become one of the most spectacular examples of the kidnapping strategy the US administration is using in its war on terrorism.

US and German investigators already considered Zammar a jihadist at the end of the 1990s. When his friends, Mohammed Atta and his associates, were identified by the United States as the leaders of the terrorist cell that struck on Sept. 11, 2001, Zammar's name moved to the top of the list of suspects. The evidence was never sufficient for an arrest warrant in Germany, however.

But the CIA was intensely interested in the exiled Syrian, who had become a German citizen in 1982 and lived in Hamburg. On Oct. 29, 2001, seven weeks after the suicide attacks on New York and Washington, the German Federal Criminal Police Office (BKA) received a request signed "JIS Berlin." The acronym JIS is used by CIA offices abroad.

The CIA document explained Zammar was suspected both of having helped to prepare the 9/11 attacks as well as planning further attacks. It requested "additional information" about Zammar's activities and his associates, based on BKA surveillance of Zammar's communications. In fact the BKA wasn't just listening in on Zammar's phone calls but had also placed him under personal surveillance.

One piece of information the BKA had obtained was that Zammar had purchased a ticket for Casablanca at Hamburg's airport at around noon on Oct. 24, 2001, just five days before the CIA issued its request. He planned to travel to Morocco in order to divorce his second wife. He also wanted to visit Mauritania, which he considered to be a truly Islamic country. Three days later, at 5:25 p.m on Oct. 27, 2001, the plane took off.

The US agents, who had been given the general facts by their liaison officer at the BKA, were concerned Zammar might want to go into hiding. And so on Nov. 20, 2001 the BKA received a second request, this time from the FBI via the US consulate in Frankfurt am Main. The message stated that JIS Berlin had altered its initial request: The US investigators now wanted to clear up a "certain confusion" regarding Zammar's identity and asked especially for "background information" on his person. JIS Berlin also wanted to know why the BKA thought Zammar was in Morocco. The US agents were in a hurry, and asked for a rapid reply.

This time, the BKA needed only six days to reply. The investigators followed a guideline issued by then-Interior Minister Otto Schily. Schily had requested that everything possible be done to support the USA in their efforts to investigate the 9/11 attacks. At the time, no one suspected the CIA would use the information to go on a manhunt, the German investigators say today in justification of their decision to pass the information on.

The BKA replied to the second request on Nov. 26, 2001. A police commissar sent a detailed biography of Zammar, in addition to a list of his relatives in Syria and Morocco. He also provided Zammar's flight information: Zammar would fly with KLM from Casablanca via Amsterdam back to Germany, departing at 6.45 a.m. on Dec. 8. The reply from the BKA ends with the words: "According to the information available to us here, Zammar is currently still in Morocco and intends to travel back on the flight he has booked."

It was the ideal dossier for preparing a strike. A special Moroccan task force arrested Zammar at the airport early in the morning on Dec. 8. He was flown to Damascus two weeks later.

The fact that the US government was well aware this constituted a violation of international law is demonstrated by a memo from the German embassy in Washington. The CIA had "assumed that Germany had 'no significant interest' in Zammar," the embassy's chargé d'affaires wrote after a conversation in the State Department in mid-June 2002. Neither Germany nor the European Union should "take action against Morocco because of human rights violations related to the arrest of Zammar," since Morocco had "definitely acted on the urgent request of the USA."

Zammar, who will have to appear before the court again on Jan. 21, still knows little about the story behind his arrest. Once filled with hatred for German society, he has since learned to appreciate its advantages.

"I lived in Germany for so many years and I'm used to the rule of law," he shouted to his lawyer from behind bars. "I never thought I would spend five years in prison without a trial."