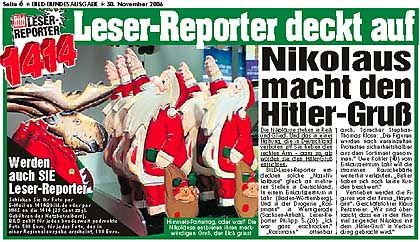 If Santa Claus were to move away from the North Pole to one of the more populated parts of the world, what political party would he support? His "peace on Earth" message might indicate a left-of-center stance. But what about his Big Brother ("He knows when you've been sleeping. He knows when you're awake) tendencies? Sounds a lot like the Republicans in the United States these days.

Or maybe he's a fascist? That, at least, is what a report in the Thursday issue of the tabloid Bild seems to indicate. Germans shopping for Christmas trinkets have been shocked recently to discover row upon row of Santa Clauses looking to all the world as if they are giving the Hitler salute -- right arm, straight as an arrow, raised skyward. Never mind that St. Nick is carrying a bag of toys and wearing a silly red hat complete with a white pom-pom. Shoppers were sure -- these Santas were Nazis.

Readers of Germany's largest-circulation paper have reported seeing the saluting St. Nicks in a number of shops around the country. Indeed, one of Germany's largest drug stores, Rossmann, even went so far as to take the offending Santas off the shelves.

But are they really giving the Hitler salute? In any other country, people likely wouldn't think twice about seeing jolly old St. Nick with a stiff right arm -- and to be fair, he looks more like he is pointing to his reindeer flying overhead than attending a neo-Nazi rally. Still, the design -- as an unscientific office poll at SPIEGEL ONLINE showed -- could easily be misinterpreted.

The toymaker behind the Nazi Santas is unimpressed with the unwanted attention their product is receiving. "We are surprised that a Santa pointing skyward has been associated with the Hitler salute," he told Bild.