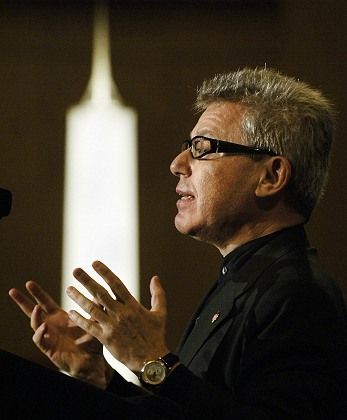 The Germany Survival Bible is dedicated to providing visitors with unique insights into how Germans tick. But while our editors and contributors all have their pet peeves, epiphanies and observations, we decided to ask around to find out what some of Germany 's better known guests have to say about the place. SPIEGEL ONLINE spoke to star architect Daniel Libeskind -- a resident of Berlin for a dozen years -- about his impressions of the country.

Born in Poland in 1946, Libeskind emigrated to Tel Aviv and then to New York. In 1989 he was commissioned to build the Jewish Museum in Berlin. He arrived in Berlin with his wife, three children and two suitcases in 1989 and knew no one. The birth of the Jewish Museum was not an easy one. Barely four months after they arrived Libeskind witnessed the fall of the Berlin wall -- six governments came and went, the Museum's name changed five times, he worked with four different museum directors and three different window companies. The museum finally opened in 2001 to wide public acclaim.

The award winning architect went on to win the World Trade Center design competition in February 2003 to rebuild Ground Zero in New York and he was chosen as the site's master planner.

Berlin is a very interesting place. Of course its a trendy place architecturally, but crucially the city is really dealing with its history. What's happening there today really gives me hope. It's not the city I first came to in 1989 -- it was very different then. And it was very strange for me to come to Germany. Virtually my whole family had disappeared (during the Holocaust).

But in Berlin I could feel the change in my bones. The older generation was disappearing and with it a huge shadow was lifting from Germany. Berlin was my home for 12 years and this city is really a part of my life -- I see myself as a Berliner. My children went to German schools and learned the German language. Of course it was difficult to live in Germany, but I could see a transformation and this transformation was brought about by a changing attitude.

The change can mostly bee seen in the younger generation where a real confrontation with the horrors of the past has taken place. There were a number of young German architects who came to work with me and they felt this need to look at the past due to the country's history and that of their parents. They were committed to Jewish culture; to understand what happened in history and why.

The former Chancellor Gerhard Schröder came to the opening of the Jewish Museum in September 20001 and met my father, who was in his nineties by then, and he told Schröder about his life -- about how he had been a Social Democrat in the 1920s and that he'd lost most of his family during the Holocaust. And Schröder actually knelt down in front of my father in the Holocaust memorial. For me, this was indicative of the positive steps that Germany has taken. It meant something incredible to me that Schröder met my father -- an old man who had gone through so much. It was a really personal experience.

Being a foreigner, of course, I am always very aware of skinheads and Germany has those problems too. Of course I've had bad experiences; all sorts of things have been said to me by people on all sorts of levels. Also on official levels, people have made statements that rang wrong. But I have taken this in stride. And generally I'm very impressed that an important step has been taken in Germany.